The executive director of the EMA, Emer Cooke, Sabine Straus, president of the PRAC and Peter Arlett, head of the Pharmacovigilance and Epidemiology department, spoke at the press conference 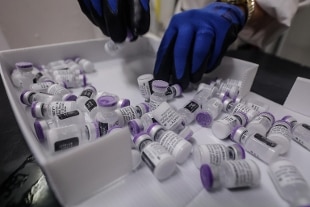 07 April 2021 In the afternoon, at 4 pm, the European Medicines Agency (EMA) will hold a press conference and should provide the conclusions of the review by the Pharmacovigilance Risk Assessment Committee (Prac) of AstraZeneca's Covid-19 vaccine and the possible links with thromboembolic events that have occurred in various EU countries.

Conditional mandatory, also because it was used by the European Commissioner for Health and Food Safety, Stella Kyriakides.

As confirmed by a memo circulated among the delegates of the member countries in Brussels, the outcome of this new analysis is decisive, because the EU's estimates of reaching the vaccination of about 70% of the community population by the end of the summer depend heavily on citizens' acceptance of the AstraZeneca vaccine.

According to the document, Germany, France, Spain, the Netherlands and Italy may be able to complete the vaccination of more than 55 percent of their population by the end of June, in line with the initial target of 70 percent.

The press conference will be attended by: the executive director of EMA, Emer Cooke;

Sabine Straus, president of the Prac;

Peter Arlett, Head of the Department of Pharmacovigilance and Epidemiology.

suspended AstraZeneca yesterday announced a suspension of the ongoing trial for the administration of its anti-Covid vaccine to children and adolescents while waiting for the British regulatory body to verify the possible link with cases of thrombosis in adults.

Professor Andrew Pollard of the University of Oxford told the BBC that there are no safety concerns with the test itself, but his scientists were awaiting further information.

Hope: on AstraZeneca and others I trust Aifa and EMA

"I think we have to trust our institutions, made up of scientists and technicians who have dedicated their lives to these matters. We are dealing with a new virus and vaccines that they have only been on the market for a few days. It is normal that science should continue to monitor. I trust Aifa and I trust EMA that they will be able to give us the right answers ", declared Health Minister Roberto Speranza.