Phone GPs ringing off the hook due to AstraZeneca pause

We have sent a notification for this news. Stay up to date with important news with notifications too. No thanks Yes, please Read the latest corona news from home and abroad here. General practitioners' phone ringing off the hook due to AstraZeneca pause GPs across the country have received calls from worried people over Easter weekend following the government's decision to partially discontin 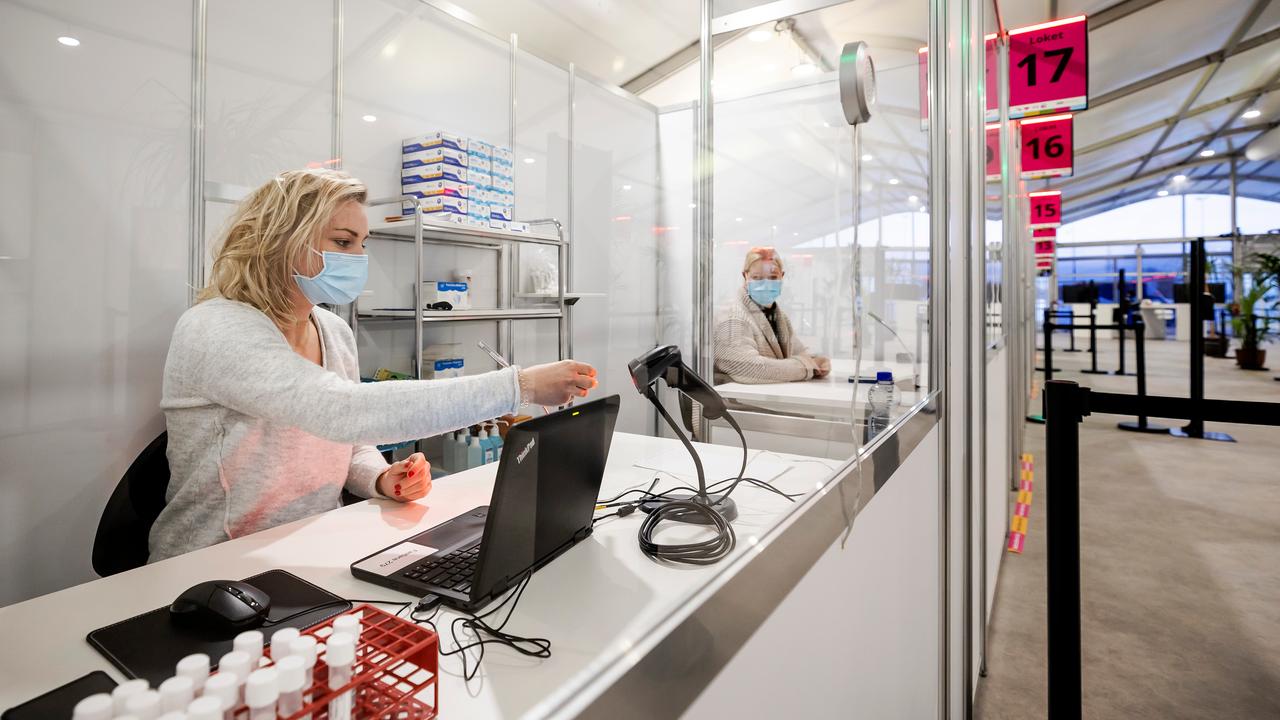 General practitioners' phone ringing off the hook due to AstraZeneca pause

GPs across the country have received calls from worried people over Easter weekend following the government's decision to partially discontinue AstraZeneca's corona vaccine.

Due to the many phone calls, some people had trouble getting a doctor's assistant on the line.

“It was very busy on the phone. Other calls had to wait.

6,392 people received a fine last week for not complying with the curfew, the police reported on Tuesday.

An additional 176 people were fined for violating the corona measures.

Over the Easter weekend, the police ended 57 illegal parties.

Such meetings are not allowed due to the corona virus.

That is less than in 2019 when judges decided a total of 219 times to impose TBS, the Council for the Judiciary reports Tuesday.

The significant decrease is probably due to the measures surrounding the corona virus.

The European Union has

exports of more than three million AstraZeneca vaccines to Australia.

The country has only received 300,000 doses of the drug, according to a source within the Australian government.

As a result, the vaccination campaign is further delayed.

"At the beginning of January, we expected to receive the 3.1 million vaccines. They have not been delivered to Australia," he told the press.

Australia had previously only complained of a blockade of 250,000 AstraZeneca vaccines from Italy.

The EU has not yet confirmed that three million vaccines have already been stopped.

It is also unclear why the EU would have blocked the vaccines.

The Australian government is under fire domestically because, according to critics, vaccination is going far too slowly.

Local media reports that more than 854,000 doses of the Pfizer / BioNTech and AstraZeneca vaccines have been administered to date, significantly less than planned.

The authorities had previously expressed the expectation that the counter would be four million injections by the end of March.

There are so many people in Belgium who want to qualify for a leftover corona vaccine that the online platform QVAX can barely cope with the number of visitors.

The vaccination centers now sometimes keep the perishable vaccines if people do not show up for their injection appointment.

People can indicate on a special website when they are available and available.

Anyone who then receives a text message with an invitation must confirm the appointment within half an hour.

Otherwise, another person on the reserve list may come and get an injection.

Vaccination of 70 to 74-year-olds starts today

As of Tuesday, the vaccination of people aged 70 to 74 years against COVID-19 will start.

In this age group, the vaccines from BioNTech / Pfizer, Moderna, AstraZeneca and Janssen are used at the GGD injection sites.

The intention is to start vaccinating people aged 65 to 69 from the end of April.

The vaccines from BioNTecht / Pfizer, Moderna, AstraZeneca and Janssen are also used for this.

The Dutch must immediately show a negative test when traveling to Germany.

From today, Dutch people who cross the border to their eastern neighbors must be able to show a negative corona test immediately.

Germany designated the Netherlands as a high-risk area last weekend due to the large number of infections.

The country had already imposed a test requirement for travelers from the Netherlands, but this meant that Dutch travelers only had to be able to show a negative test after a 48-hour stay in Germany.

That test obligation has been tightened from today.

Pharmaceutical Valneva hopes to start this month with the final research

The third research phase of the potential corona vaccine from Valneva is expected to be started in April, the pharmaceutical company announced on Tuesday.

The first two phases of research of the potential vaccine have been completed and, according to the company, they were promising.

For example, the VLA2001 vaccine is "generally safe" and was "well-tolerated in all dose groups tested," claims the pharmaceutical company.

To date, the vaccine has been tested on 153 adults.

In the third research phase, in which it must be demonstrated whether the vaccine is effective, that research group will be expanded to thousands of people.

In order to start with this research phase, the company needs permission from authorities.

The vaccine would be produced and distributed in the United Kingdom.

The European Commission (EC) is still negotiating with Valneva about a possible delivery of the vaccine to the European Union.

Belgians can register for the reserve list for remaining vaccines

Belgium is today launching the online platform QVAX, on which residents of the country can indicate that they want to be on the reserve list for the corona vaccine.

They can let them know when they can come quickly to a vaccination center in the coming weeks.

When that vaccination center has a dose of the vaccine, they can consult someone from this list, write several Belgian media, including

Initially, only two vaccination centers will use the platform.

If the use of the reserve list is found positive at these two sites, its use will be rolled out to all vaccination centers in the country next week.

The vaccination centers have no more than a few doses of the vaccine per day, for example because someone does not show up for his or her appointment.

When a vaccine turns out to be over, the reserve list is consulted and someone within the group whose turn it is then receives an invitation to come and get the shot.

It does not therefore mean that the persons on this list will simply receive a vaccine earlier than would be expected according to the vaccination strategy;

Monday evening because they were present at a large party in a warehouse in Utrecht.

In addition, 57 tickets were issued.

GGD says it rejects dozens of requests for early vaccination every day. Dozens

of people from high-risk groups, who are not yet due to receive a vaccination, are knocking on the door of the GGD for an early vaccination every day.

However, they get no response, despite the sometimes poignant stories, says spokesman Jacqueline Toonen of umbrella organization GGD GHOR on Tuesday in

No more compulsory quarantine after travel between New Zealand and Australia

People traveling between New Zealand and Australia will no longer be required to go into quarantine from April 19, New Zealand Prime Minister Jacinda Ardern announced on Tuesday.

According to the prime minister, the current corona situation in both countries meets the conditions to allow travel movements again.

“Our team's success in keeping the coronavirus under control means it is once again possible to reconnect with our loved ones and resume traveling between Australia and New Zealand,” said Ardern.

The situation in the Curaçao hospital CMC remains "serious, but is manageable", said medical director Ingemar Merkies on Monday at a government press conference.

Last week, Prime Minister Eugene Rhuggenaath stated that the hospital was full due to the large increase in the number of corona patients.

According to Merkies, more space has been created in the hospital in recent days for the reception of corona patients, including in intensive care (ic).

Places have also been set up in the former Sehos hospital, which is next to the CMC.

Furthermore, Dutch doctors and nurses have come to the island and more are on the way to help with the crisis situation.

Curaçao had specifically asked for this.

Some corona patients have also been transported to Aruba.

Merkies thanked the entire Dutch Kingdom for the help provided.

At the press conference it was announced that Curaçao wants to have everyone who wants an injection vaccinated before the end of the month.

Currently, more than two thousand people are vaccinated every day.

That number should increase to between seven and nine thousand people a day.

More injection sites will be opened for this.

Johnson advises the English not to book summer holidays

It is still too early to say whether summer holidays are possible this year, according to British Prime Minister Boris Johnson.

England wants to determine whether travel to a country is possible on the basis of risk levels.

"We don't want to bring the virus back to our country," Johnson said.

Therefore, according to him, it is better that people do not book a holiday yet.

If a country is marked as 'red', travelers must be quarantined when they return to a hotel.

With an orange risk level, they are allowed to go into home quarantine, while with 'green light' returning travelers only have to take a negative corona test with them.

Johnson promises to make a decision well before mid-May.

The English would not need such a document to visit a pub or shop in their own country, for example.

The lockdown in England is gradually being phased out now that more and more people have been vaccinated against COVID-19.

Scotland, Wales and Northern Ireland have their own planning.

Situation in juvenile psychiatry 'unsustainable' due to coronavirus according to inspectorate

The corona virus has further exacerbated the problems in juvenile psychiatry.

As a result, care for young people with serious psychological problems has stalled, according to research by the Healthcare and Youth Inspectorate (IGJ),

The announced easing was in

The prime minister wants to make it easier to "visit loved ones".