His first foreign visit since assuming power .. The Italian Prime Minister calls for a strict commitment to the ceasefire in Libya

The Italian prime minister urged the Libyan government to ensure the implementation of the ceasefire in the country and strict adherence to it, while the Libyan prime minister called on his Italian counterpart to increase cooperation between the two countries in the coming period. 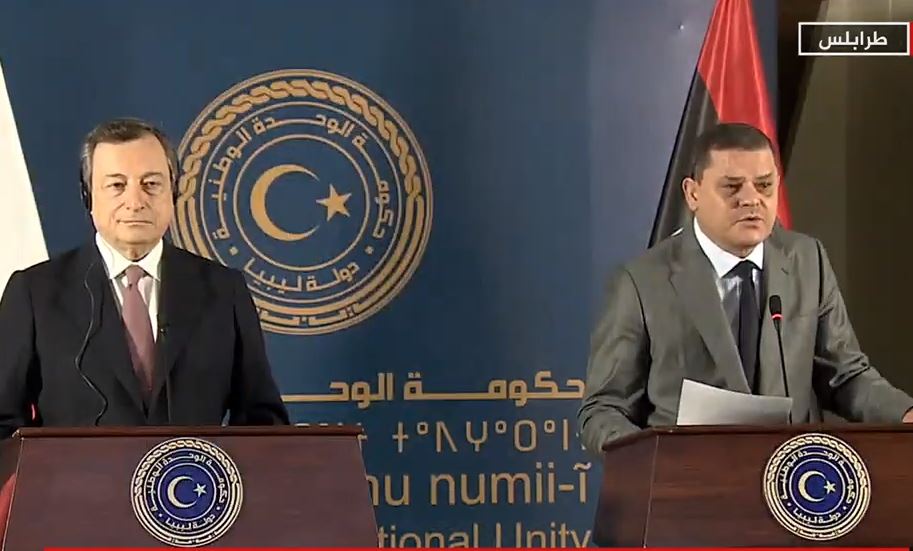 Italian Prime Minister Mario Draghi urged the Libyan government today to ensure the implementation of the ceasefire in the country and strict adherence to it, while Libyan Prime Minister Abdel Hamid Dabaiba called on his Italian counterpart to increase cooperation between the two countries in the coming period.

On his first visit outside Italy since taking power last February, Draghi said in a joint press conference with Dabaiba in Tripoli, "The precondition for Libya to be able to move forward courageously and decisively is that strict adherence to the ceasefire continues, and work to closely monitor it." ".

Draghi added that his visit to Libya is "evidence of the historical importance of the relationship between the two countries, and it is a unique moment in the history of Libya with the existence of a government of national unity recognized by Parliament, which is heading on the way to national reconciliation."

The Italian official pledged to increase the number of scholarships allocated to Libyan students in his country, adding that there is a will to restore cultural cooperation between Tripoli and Rome "as it was 7 years ago, and to move this cooperation to a higher level."

For his part, the head of the national unity government in Libya said that his country is looking forward to reopening the airspace between it and Italy, activating the customs agreement, and addressing all outstanding issues regarding Libyan investments in Italy.

Pictures .. The Prime Minister of the National Unity Government, Abdel Hamid Dabaiba, received his Italian counterpart, Mario Draghi, at the headquarters of the Prime Minister, in his first foreign visit since assuming the presidency of the Italian government.

Dabaiba added in the press conference after his talks with his Italian counterpart that Tripoli expects to increase cooperation with Rome in the fields of energy, electricity and health, indicating that he agreed with Draghi to hold a meeting of the Libyan-Italian joint committee.

The Libyan official stressed the need to build "a solid and healthy relationship between Italy and Libya, the first slogan of which is the sovereignty of Libya first."

The last visit of an Italian prime minister to Tripoli was in December 2018, at that time by Giuseppe Conte.

Draghi's visit to Libya was preceded by visits by European officials, the most prominent of which was the visit of the foreign ministers of France, Germany and Italy to Tripoli about two weeks ago, and it is expected that the Greek Prime Minister Kyriakos Mitsotakis will also visit Tripoli today.

It is noteworthy that the UN-backed government of Dabaiba took office last month and faces great challenges related to improving services and preparing for general elections next December.

After years of armed conflict and political and military division, the Libyan crisis has witnessed a breakthrough in the past few weeks, after the parties managed to ratify a unified transitional authority, which took over its duties on March 16.