"The request to leave the road was refused": what is known about the detention of nine people near the colony with Navalny

The police detained nine people, including CNN journalists, near the colony in the Vladimir region, where Alexei Navalny is serving his sentence. This was reported in the regional Ministry of Internal Affairs, adding that the audience violated public order. In total, about 45 people gathered near the colony, of which about 30 were “media representatives and bloggers,” the Ministry of Internal Affairs said. The Russian Foreign Ministry stressed that the detainees interfered with the work of the institution and the passage of vehicles, while they did not show their press cards. Later, the journalists were released. 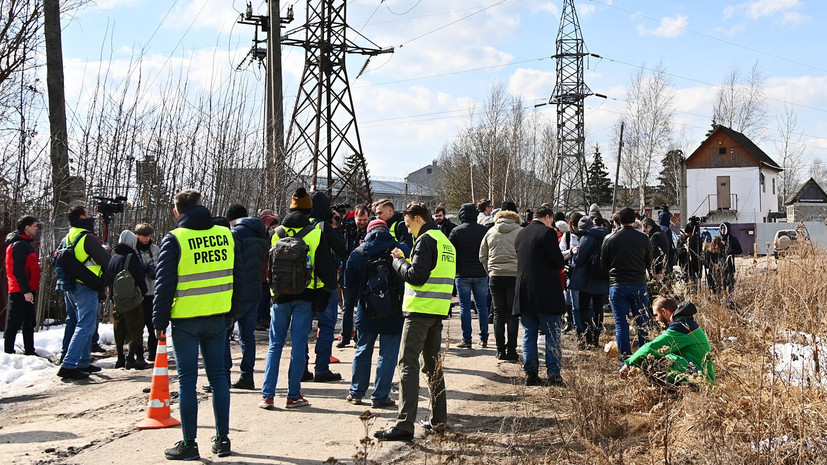 The police detained several people near the colony in the Vladimir region, where Alexei Navalny is serving his sentence.

This was reported to the Ministry of Internal Affairs for the region.

The department clarified that about 45 people gathered in the territory adjacent to PKU IK-2 of the Federal Penitentiary Service for the Vladimir Region, of which about 30 were media representatives and bloggers.

“9 citizens who committed violations of public order were taken by police officers to the territorial department of internal affairs for further investigation,” the ministry said.

As reported by RIA Novosti, among the detainees were the head of the Alliance of Doctors * Anastasia Vasilyeva and journalists from the CNN TV channel.

According to the agency's correspondent, the police called on those gathered near the colony to disperse, as they obstructed the work of the special institution and the passage of vehicles.

The police warned that failure to comply with the requirements threatens to be prosecuted.

Vasilyeva did not fulfill the police's demands, after which she was detained.

Following her, the police detained the CNN operator, as well as the correspondent of the TV channel Matthew Chance.

It is noted that the detained journalists had neither press cards nor vests with the words “Press” on them.

After that, the police detained several people, including representatives of the media.

The Russian Foreign Ministry, commenting on the arrests, explained that they were on the road.

“The police detained several people, including the aforementioned journalists.

At the request of representatives of law enforcement agencies to get out of the way, as they interfere with the work of a special institution and the passage of vehicles (and failure to comply with such requirements threatens to be prosecuted), the journalists refused.

They also did not show their accreditation cards, ”RIA Novosti quotes a representative of the diplomatic service.

Later, Matthew Chance said on his Twitter that the journalists were released from the police station.

He accompanied the message with a selfie with a police representative.

The Alliance of Doctors also reported that Vasilyeva was released.

It is noteworthy that in February 2018, Matthew Chance, reporting from the building of the Internet Research Agency in St. Petersburg, decided to examine the contents of garbage cans to find there evidence of subversion and the influence of "Russian Internet trolls" on US political processes.

Anastasia Vasilyeva herself was detained in January as a suspect in a case of violation of sanitary and epidemiological standards.

The case was opened after an illegal action on January 23 due to the fact that people infected with coronavirus participated in it.

On the eve of the newspaper Izvestia, with reference to the Vladimir department of the Federal Penitentiary Service (UFSIN), reported that the blogger was transferred to a medical unit with signs of acute respiratory infections, which were identified in him during a planned medical examination.

At the end of March, Navalny himself complained of a deterioration in health, in particular, stating that he was experiencing pain in his back, and his leg "lost sensitivity."

The department of the Federal Penitentiary Service for the region then informed that Navalny was being provided with all the necessary assistance in accordance with his current medical indications.

Presidential press secretary Dmitry Peskov, commenting on information about Navalny's health, stressed that in case of illness, the blogger will receive the necessary medical care provided for by the rules of the Federal Penitentiary Service.

“All the necessary measures are being taken there.

Naturally, there can be no talk of any special conditions for one of the convicts, ”said Peskov.

He recalled that there are certain rules in the colony, "including the treatment of those prisoners who are sick."

“Therefore, if we are really talking about a disease, then treatment will be provided at the appropriate level,” the Kremlin spokesman concluded.

Earlier, the RT film crew visited IK-2 in the Vladimir region, where Navalny is serving a sentence, and talked with the blogger himself, the leadership of the colony, people working in the institution, as well as with prisoners.

Navalny flatly refused any kind of work, including cleaning the premises of his squad, citing a serious health condition.

The blogger, in particular, transmitted information through his lawyers to the media that he was being denied medical care.

At the same time, paramedic Natalya Avdeeva said that since his arrival at the colony, Navalny had been repeatedly examined and received full medical care.

During the visit, a member of the public chamber of the Russian Federation, Maria Butina, and a member of the presidential council for the development of civil society and human rights, Kirill Vyshinsky, tried to talk to Navalny in order to record his complaints about the conditions of detention.

However, the blogger cut off most of the dialogue and insulted the interlocutors.

Let us remind you that on February 2 the Simonovsky District Court of Moscow ruled to replace the punishment for Alexei Navalny in the Yves Rocher case.

The blogger was sentenced to 3.5 years in a general regime colony and a fine of 500 thousand rubles, while counting the period of his stay under house arrest.

On December 30, 2014, the Zamoskvoretsky Court of Moscow sentenced Navalny to a 3.5-year suspended sentence with a probation period of five years in the case of fraud against Yves Rocher and the Multidisciplinary Processing Company.

In August 2017, Navalny's probation was extended for a year due to violations committed by him.

After that, the representative of the Federal Penitentiary Service explained, Navalny seven times did not appear for registration with the Penitentiary Inspectorate, as a result of which he was issued five warnings about the possibility of replacing the suspended sentence with a real one, and also violated public order more than 50 times, which is also a violation of the conditions of supervision for a conditionally convicted person.

* "Alliance of Doctors" is included in the register of NPOs performing the functions of a foreign agent by the decision of the Ministry of Justice of the Russian Federation dated 03.03.2021.