"Lost public danger": the legendary killer of the 1990s Sasha the Soldier tried to get out on parole

As it became known to RT, the legendary killer of the "Orekhovskaya" group, Alexander Pustovalov (Sasha-Soldat), who is serving a 24-year sentence in a strict regime colony, has filed a petition for transfer to a colony-settlement. In January of this year, Pustovalov asked to replace the real term with restriction of freedom. His petition for early release was supported by representatives of the Federal Penitentiary Service and the investigating authorities, but the prosecutor's office opposed it. As a result, the court considered that it was too early for Pustovalov to be released. Meanwhile, his term of imprisonment ends in 2023. 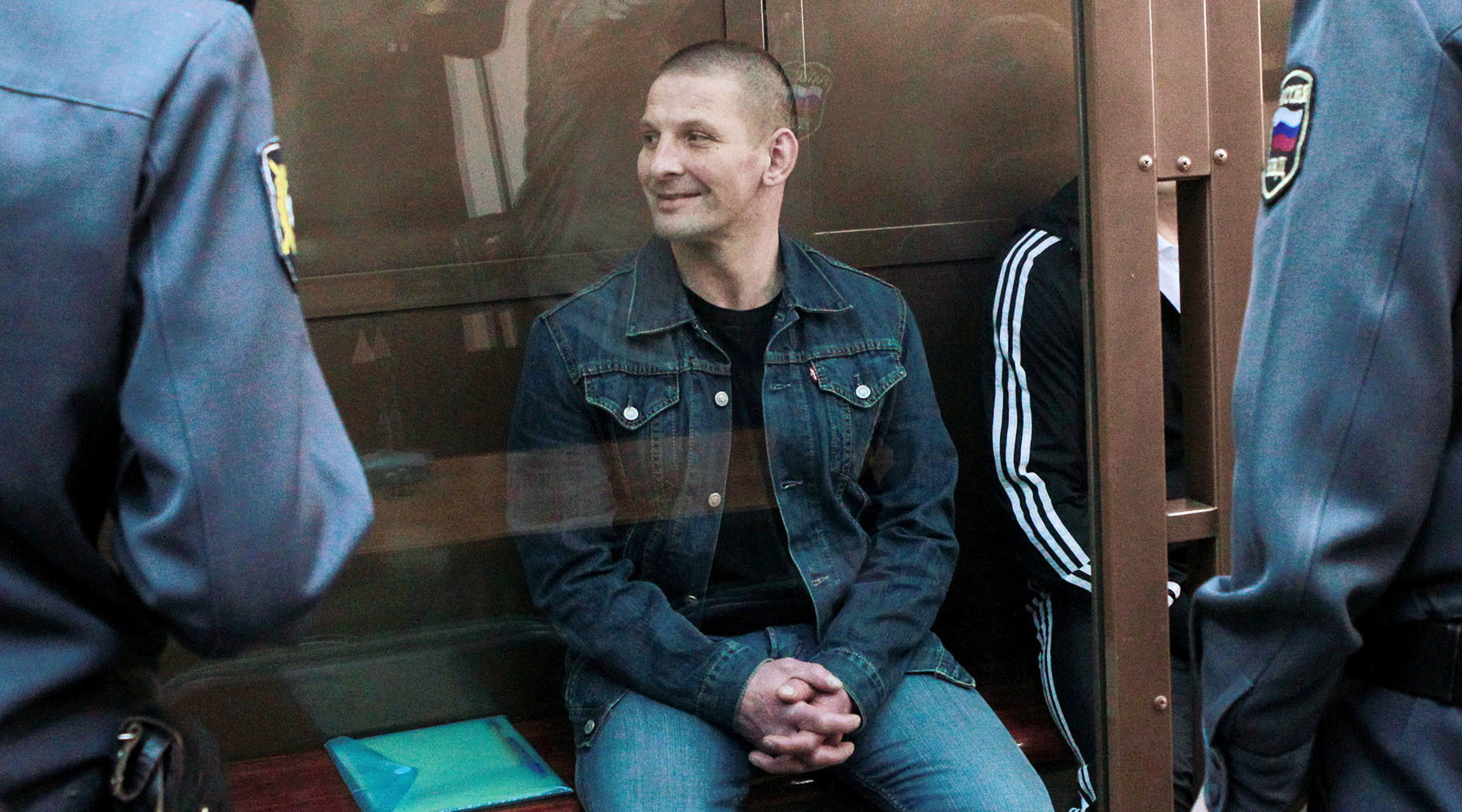 A few days ago, the killer of the Orekhovskaya organized criminal group, Alexander Pustovalov, convicted of almost two dozen murders, filed a petition with the court for transfer from a strict regime colony in the Tver region, where he is serving his 24-year sentence, to a colony-settlement.

In January Pustovalov could be free.

He asked to replace the punishment with restriction of freedom, and his petition was supported by the FSIN and the Main Investigative Directorate of the Investigative Committee in Moscow.

However, the court left him in custody.

Alexander Pustovalov is one of the most famous Russian killers.

He was born in 1973 in Moscow, grew up without a father, was fond of music and judo.

After serving in the Marine Corps, Pustovalov in the early 1990s wanted to join the OMON or SOBR, but the lack of higher education prevented.

Pustovalov got into the ranks of the criminals thanks to his fighting qualities.

In one of the cafes, in a fight, he single-handedly dealt with five opponents.

At that moment, members of the Orekhovskaya gang were resting in the institution.

They liked how Pustovalov fought, and they took him to them.

Pustovalov quickly grew from an ordinary soldier to the assistant to the leader of the Orekhovskaya organized criminal group, Sergei Butorin ("Osya").

During his criminal career, Sasha the soldier committed about 20 murders only according to official data.

Its victims were both representatives of rival organized crime groups and the Orekhovskies themselves, from whom it was decided to get rid of for one reason or another.

The most famous victim of Pustovalov is the killer of the Kurgan organized criminal group, Alexander Thessaloniki (Sasha Makedonsky), who was killed in 1997 in Greece, known both for his excellent shooting skills and repeated escapes from prison, including the only truly successful escape from a Moscow pre-trial detention center " Sailor silence ".

After the arrest on November 19, 1999, Pustovalov, who was in no hurry to confess what he had done, is credited with the phrase: "This is what you prove - it's mine."

And when asked why he killed, he allegedly answered: "I am a soldier, this is my job."

Unlike another legendary killer of the Orekhovskys, Alexei Sherstobitov (Lyosha the soldier), who managed to write several books behind bars, distribute dozens of interviews and even organize a magnificent wedding with a glamorous photo shoot, almost nothing is known about Pustovalov's life in the colony.

The latest news about him is dated 2016.

Then the Moscow City Court for four new episodes of murders increased his term from 23 to 24 years in a maximum security colony.

Pustovalov's term, which he is serving in the Tver region, is coming to an end - he should be released on November 18, 2023.

However, as RT found out, the 47-year-old "liquidator" recently tried to mitigate the punishment through the court, replacing the actual imprisonment with the restriction of freedom.

As RT found out, the consideration of Pustovalov's petition took place on January 28.

He asked the court to replace the unserved part of the term with restraint of liberty, referring to the fact that he repented of his deed and provided assistance in solving a number of crimes.

The convict also noted that he had already "lost the social danger", was employed, took an active part in the social life of the colony, had encouragements and certificates.

“The existing penalties would be extinguished in the manner prescribed by law.

The claims were settled in full.

In addition, while serving his sentence, he was diagnosed with a serious illness that requires the use of medications.

Has a minor child, keeps in touch with family and friends.

After his release, he will be provided with housing and work, ”the text of the court order says (available to RT).

The fact that Pustovalov has children was not previously known.

He ended up in the colony, being single and childless.

Pustovalov's petition was fully supported by the administration of the colony, “referring to the fact that the latter is characterized positively, and, in the opinion of the administration, the replacement of the not served part of the sentence with a milder type of punishment is expedient, the goals of punishment have been fully achieved and, for his correction, the convict does not need in the future serving the sentence imposed on him by the court ”.

The court was presented with a detailed description of Pustovalov, which reveals previously unknown details of his life behind bars.

In particular, over the years in custody, Pustovalov earned 80 penalties in jail and colonies, which have now been lifted and canceled, as well as 24 incentives, more than half of them, 13 over the past few years.

For two years, from November 2011 to November 2013, he was kept under lightweight conditions.

He was transferred back to the usual conditions, being recognized as a malicious violator of the order of serving the sentence.

He has been in IK-9, where Pustovalov is serving his term, since March 2017.

Almost immediately the convict was employed.

At first, he worked as a worker in the section for the assembly of ritual products, but after three months he was transferred to the position of salting vegetables of the agricultural section.

For four years he received one penalty and 13 awards - "for a conscientious attitude to work and exemplary behavior."

Judging by the characteristics, Pustovalov's behavior in the colony is more than satisfied.

“He is sociable, active and friendly by nature.

He is active in social and legal training classes.

In dealing with the administration, he is polite and tactful.

The attitude towards unpaid work (according to Art. 106 of the RF PEC) is positive, ”the court ruling says, which describes Pustovalov from the colony.

It is noted that he fully extinguished the claims, pleaded guilty and maintains contact with relatives through correspondence and visits.

However, after three and a half months, on July 28, 2017, Pustovalov was removed from the register as a person inclined to escape.

In October 2020, he was removed from the register as a person prone to attacking employees of the administration, after which, apparently, he decided to apply for parole - the corresponding petition from Pustovalov was submitted to the court in November of the same year.

In addition, the convict's petition was supported by the representative of the Main Investigative Directorate of the Investigative Committee of Russia in Moscow.

In a petition from the department, the fact of cooperation of Pustovalov with the investigating authorities was confirmed.

At the court hearing, which was held in an open mode, Pustovalov additionally emphasized his poor health, explaining that while serving his sentence, he acquired serious illnesses requiring treatment.

In turn, a representative of the prosecutor's office spoke out against the early release of Pustovalov.

However, the court found the arguments of Pustovalov and the representatives of the colony insufficient for his release, considering that he had not yet fully embarked on the path of reform.

In addition, of the entire term of the sentence served, only in the last three years does he not allow violations of the detention regime, which indicates the unstable behavior of the convict.

The court also takes into account that during the period of serving the sentence, the convict was recognized as a malicious violator of the order of serving the sentence, was on the preventive record as a person prone to attacking representatives of the administration and other law enforcement officers, from whom he was removed only on 07.10.2020, which gives reason to believe that the correctional institution at the time of consideration of the petition and presentation had not achieved all the tasks set by the PEC of the Russian Federation to correct it, ”the resolution says.

The court also considered that medical documents about Pustovalov's illness could not serve as an unconditional basis for replacing his punishment with a milder form, since this disease does not prevent the convict's further stay in the colony.

(03/13/2017 - placement in a punishment cell), as well as a short time from the date of his removal from the preventive register as a person prone to attacking employees of the administration and other law enforcement officers, the court finds that there are no sufficient grounds to satisfy Pustovalov's petition A.S.

and the submission of PKU IK-9 of the Federal Penitentiary Service of Russia in the Tver region to replace the convicted person with a less-served part of imprisonment with a milder form of punishment, ”the court's decision says.

Unable to achieve complete release, on April 2, Pustovalov filed a petition for transfer to a colony-settlement.

The date of its consideration has not yet been set.