Health Minister: Spahn expects to have 20 percent vaccinated by the end of April

According to Health Minister Jens Spahn, the vaccination pace will "gain speed". So far, just about ten percent of Germans have received a vaccination against the coronavirus. Despite the vaccination, he continues to urge caution. 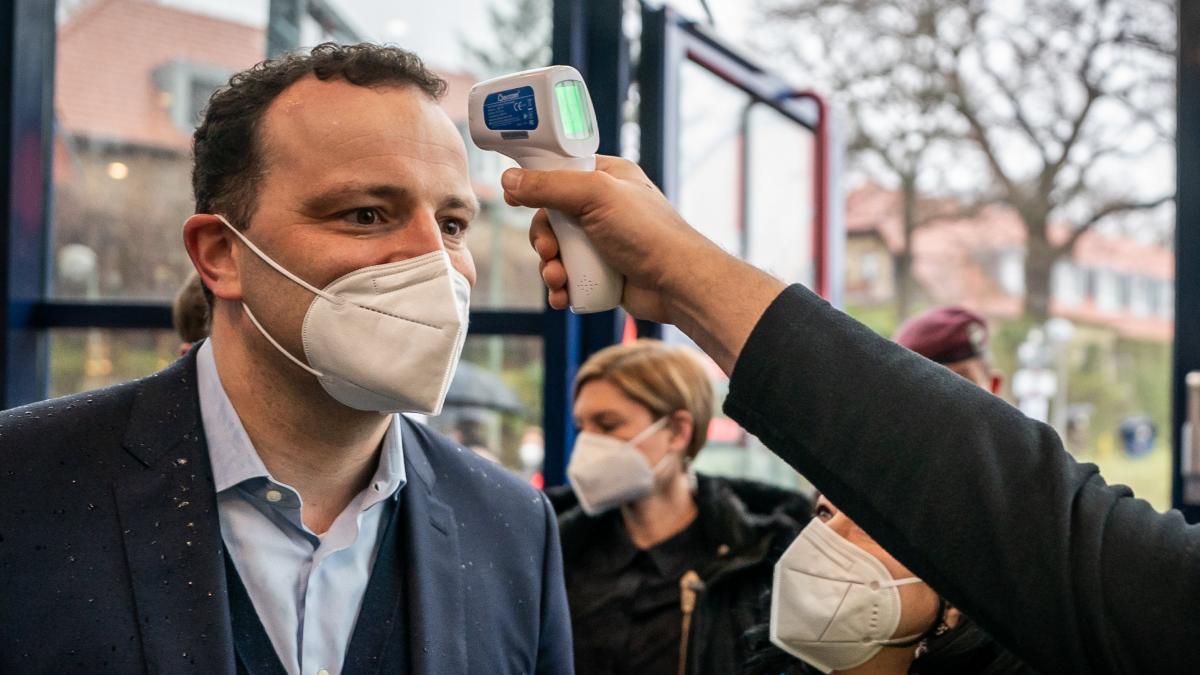 Federal Health Minister Jens Spahn (CDU) expects that by the end of April 20 percent of the population in Germany will have received a first dose of vaccine.

The campaign will now "gain speed," said Spahn on Monday in Berlin.

There were debates about his push to relax corona restrictions for vaccinated people.

In the first quarter, due to the shortage of vaccines, only about ten percent of Germans were vaccinated against the coronavirus, "we will now be able to do the next ten percent in a month," said Spahn on Monday when visiting a vaccination center in Berlin.

He pointed out that in the future, in addition to the vaccination centers, the doctor's offices would also increasingly play a role, where vaccination should start on a larger scale from Tuesday.

“Vaccination does not prevent the third wave,” Spahn warned, however, to be careful.

He also referred to the situation in the intensive care units, where the occupancy of beds by Covid patients is increasing again significantly.

According to the Divi Intensive Register, the occupancy number exceeded 4000 on the Easter weekend. Around 55 percent of these were invasively ventilated.

"We have to break the third wave together," Spahn called for further efforts.

This also includes the consistent implementation of the so-called emergency brake in the case of corona incidence values ​​above 100. Only when the numbers fall again, "then testing helps us to build a bridge until the vaccination takes effect," said the minister.

Berlin's Senator for Health Dilek Kalayci emphasized at the meeting with Spahn that the new offers to over 60-year-olds for vaccinations with the vaccine from AstraZeneca were "very well received".

From North Rhine-Westphalia and other federal states, a high demand from 60 to 70 year olds for AstraZeneca vaccination appointments was reported.

Spahn reiterated his initiative, according to which vaccinated people could get more freedom again after the end of the third wave.

It is not about privileges, but about "that we can treat completely vaccinated people like those who have tested negative".

Precautions such as distance rules or mouth and nose protection would continue to apply to both groups.

Lauterbach is also in favor of the freedom of vaccinated people

The Minister of Health had previously referred to a new analysis by the Robert Koch Institute (RKI) in “Bild am Sonntag”.

Accordingly, fully vaccinated people are less infectious than those infected without symptoms with a negative corona rapid test.

"I support this proposal because it has been shown that people who have been vaccinated are rarely infected and that they are probably no longer contagious to others if they are infected," said the SPD health expert Karl Lauterbach to the newspapers of the editorial network in Germany.

The German Association of Towns and Municipalities also made positive statements in the Funke media group.

AfD parliamentary group leader Alice Weidel warned in Berlin against a "compulsory vaccination through the back door".

The general secretary of the German Society for Immunology, Carsten Watzl, called in the "Augsburger Allgemeine" to concentrate more on initial vaccinations in order to achieve a "vaccination boost" and to offer as many people as possible basic protection from serious illnesses.

Lauterbach also suggested increasing the time interval between vaccinations with the preparations from Biontech and Moderna from six to twelve weeks.