Video .. Inter is "a step away" from the Italian League title, Juventus and Milan are outside the golden square

Easter this year will be exceptional for the Inter team, as it comes after the day it is close to clinching the Italian Football League title for the first time in 11 years, in light of the bleeding points suffered by Milan and Juventus. 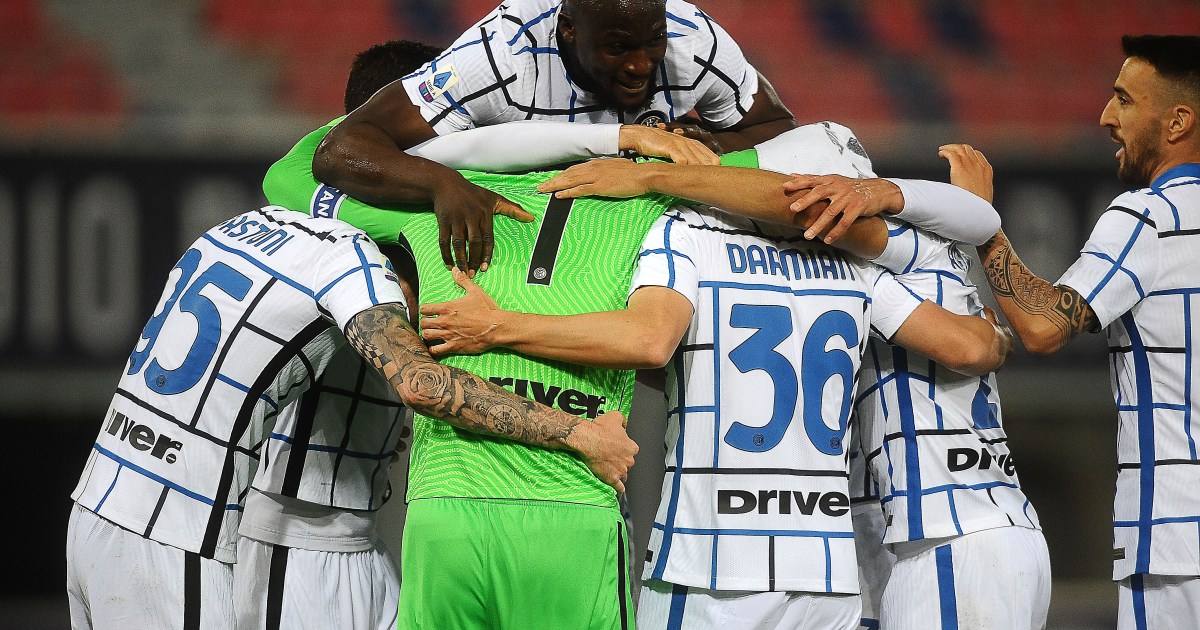 Easter this year will be exceptional for the Inter team, as it comes after the day it is close to clinching the Italian Football League title for the first time in 11 years, in light of the bleeding of points that Milan and Juventus suffer and may even deprive them of the Champions League qualification golden square.

Inter extended their winning streak to 9 games by defeating Bologna on Saturday, and the results of their rivals came in their favor after rivals Milan and Juventus drew with Sampdoria and Turin, respectively.

With this result, coach Antonio Conte's team leads the competition by 8 points from Milan and can boost this advantage to 11 points if it defeats Sassuolo in a postponed match next Wednesday.

Three vital points on our return to action ✅

And the Italian media are sure that Inter will end Juventus' title domination in the last 9 years and claim their first title since 2010.

The headline of the Corriere dello Sport newspaper read "They will not follow you", while Lastamba newspaper described the title as "one step away".

the seventeenth round of the Italian League,

And as the media have indicated, it is difficult to catch any competitor to Inter, who have won 9 consecutive league matches for the first time since 2007.

Coach Conte's team needed to reach round 22 to take top spot from rivals Milan, and since then the difference has increased and the team scored 21 goals and conceded only 3 goals in its nine victories.

the twenty-eighth round of the Italian League,

A wonderful victory for Milan away from home: Ibrahimovic, Diaz and Chalhanoglu scored the goals!

Inter benefited from the extra period to prepare with the participation of rivals in Europe after their disappointing exit from the Champions League group stage in December.

Conte’s predictable response was that Inter will decide the identity of the hero.

"There are 10 games worth 30 points, so nothing is over yet. We have done a good job so far, but it is still not enough," he told Inter TV.

Inter's hopes for the title were boosted by the collapse of Milan and Juventus, who were closest to his rival.

Round 28 of the Serie

Great afternoon for the Benevento fans: they clinched the victory thanks to Gaish!

The two teams overturned their delays on Saturday to tie, and Milan settled with two wins in the last 5 matches in the league, while Juventus won one point from the two threatening relegation clashes with Torino and Juventus.

the seventeenth round of the Italian League,

After wasting the points, doubts increased about the possibility of the two teams ending the season in the semi-finals and qualifying for the Champions League.

The victories of Atalanta, Napoli and Lazio came to narrow the difference with second-placed Milan, and Lazio in sixth place can reduce the difference to 5 points with Milan if it wins in its postponed match against Turin.

Atalanta beat Udinese to overtake Juventus and become third, and coach Andrea Pirlo's team may be out of the semi-finals if they lose against Napoli next Wednesday.

Failure to qualify for the Champions League would be a disaster for Juventus, who won the last 9 Serie A titles, but it is something that could happen in an exciting season nearing its end.