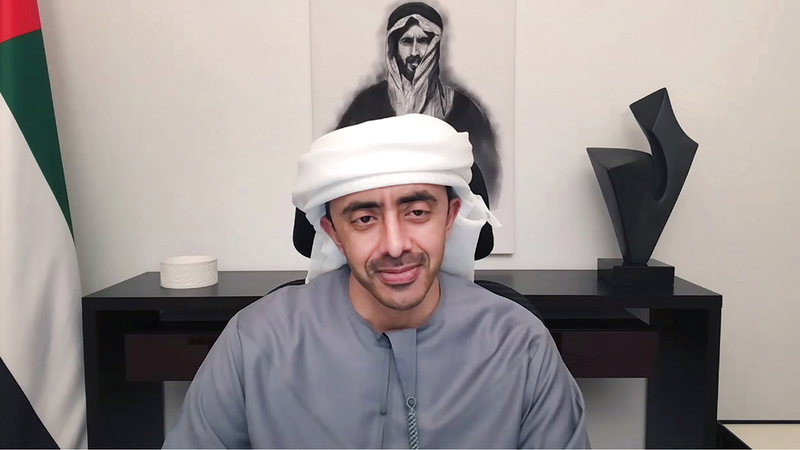 The meeting, which was held via remote visual communication technology, reviewed the size of the achievement since the last meeting, which was held last February, and the committee's work plan during the next stage, following the announcement of His Highness Sheikh Khalifa bin Zayed Al Nahyan, President of the State, in 2021 in the state The UAE is "in the year of fifty".

The meeting also discussed the agenda for the first phase of the year of the fiftieth in light of the main pillars around which the activities of the fiftieth year are centered.

His Highness indicated that the UAE has succeeded, thanks to the enlightened vision of the founding fathers and the efforts of the state’s leadership, in establishing a unique development model based on noble human values ​​based on tolerance and coexistence, stressing that this model has led us to achieve pioneering achievements during a short period of the federation’s life. Inspiration to the whole world.

His Highness added that the celebration of the Union's golden jubilee is an important occasion to reflect on the process of building our country, which started decades ago from the desert and carried its global achievements towards Mars and to get to know everyone who has a role in building our homeland.

It is also a call to all segments of society to unleash their aspirations for the future of the next fifty years in the march of the Union.

The committee meeting was attended by Minister of Cabinet Affairs Muhammad bin Abdullah Al Gergawi, Minister of Health and Community Protection Abdulrahman bin Muhammad Al Owais, Minister of State for International Cooperation Reem bint Ibrahim Al-Hashemi, Minister of Culture and Youth Noura bint Muhammad Al-Kaabi, and Minister of State for Youth Affairs Shamma bint Suhail bin Faris Al-Mazrouei. And the head of the Department of Culture and Tourism in Abu Dhabi, Muhammad Khalifa Al-Mubarak, the head of presidential protocols at the Ministry of Presidential Affairs Muhammad Abdullah Al-Junaibi, the Director General of the Public Diplomacy Office Saeed Muhammad Al-Eter Al-Dhanhani, the Director General of the Department of Tourism and Commercial Marketing in Dubai Hilal Saeed Al-Marri, and the Executive Director for Strategic Media Affairs of the Executive Affairs Authority Reem Yousef Al-Shammari, and Samira Morshed Al-Rumaithi, Undersecretary for Presidential Protocol at the Ministry of Presidential Affairs.

• “The celebrations of the golden jubilee of the federation are an important occasion to reflect on the process of building our state.”

Main pillars of the activities of the year fifty:

■ That the launch of the year of fiftieth be in a festive spirit that includes everyone who considers the UAE their home.

■ Inviting the people of the country to reflect on the values ​​and achievements of the past, out of pride and pride in our founding fathers.

■ Inspiring young people to develop their perceptions about the ambitions of the next fifty years and support them to achieve qualitative national achievements that enhance the process of progress and prosperity.