The announcement on TV: agreement reached with the European Commission to get the Air France-KLM budget back on track. No mention of the figures 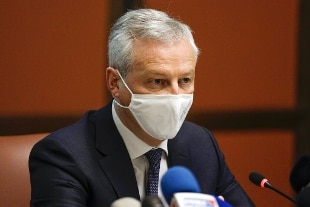 04 April 2021 The French government has reached an agreement with the European Commission on state refinancing to write off the budget of Air France-KLM.

Le Maire did not refer to the agreed amount, but confirmed that the group's board is expected to meet on Monday to discuss and launch the aid package, caused by the paralysis of air transport created by the pandemic.

Air France-KLM, a group that received € 10.4 billion ($ 12.2 billion) in government-guaranteed loans last year, has a phased recapitalization plan to ease the debt burden, sources said. to the press "It was a long and difficult negotiation, but I think we have reached a good agreement with Margrethe Vestager", the EU Antitrust Commissioner, said Le Maire.

The governments of France and the Netherlands each own nearly 14% of AirFrance-KLM, and the Dutch state had conducted separate talks with the EU to convert its € 1 billion KLM loan into hybrid debt, in repayment for slot concessions at Amsterdam-Schiphol airport