Elias feels cheated by the Christmas packaging: "The toy is ridiculously small"

The toy bench is aimed at children over the age of three, and on the packaging it appears to be level with the child playing with it. But in reality, Elias Helou's barely three-year-old is forced to kneel when he uses his toy, and Elias' father feels cheated. 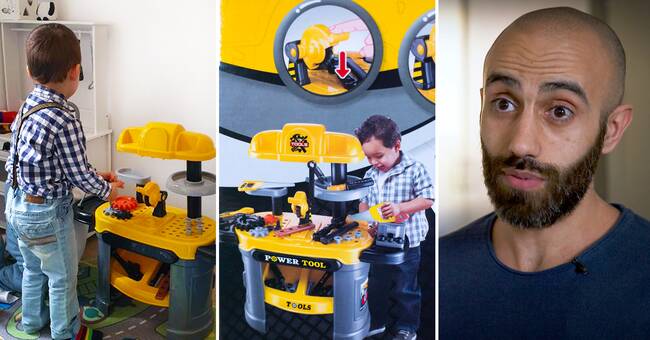 Elias Helou from Uppsala got a real surprise when his son opened the gift that Elias bought for him at Christmas.

I thought it was much bigger.

It would have suited my three-month-old baby better, says Elias Helou.

According to Plusredaktionen's calculation *, the length of the boy on the package corresponds to the average length for a boy of about one year.

This if you compare with the actual height of the toy.

The actual dimensions of the product are printed on the packaging, but Elias did not see it until the son had already opened his gift and become fond of it.

Therefore, Elias felt that he could not complain about the product, but he thinks that the packaging is misleading and should be changed.

"Should have been done differently"

- The packaging should have been made differently.

It is difficult to free oneself from the idea that one has done this with intent to make the product appear larger than it actually is.

Jula's spokesperson Magnus Ljung writes in an email to Plus that the company has not received this type of feedback before about this product.

- Rather, the response has been overwhelmingly positive, with very few complaints.

On Jula's website, however, you can see that a customer already three years ago pointed out that the packaging is misleading, and on the website there is a completely different product image, with a child in a more fair size.

Jula regrets that Elias (who bought the toy directly in the store) feels misled and emphasizes that this was not the intention.

- We now take the feedback to our supplier with us with the aim of making the packaging even clearer for our customers, writes Magnus Ljung.

On Jula's website, a more accurate picture (on the left) of the child's and toy's proportions is given than on the packaging.

The company is now considering clarifying the information in the store as well.

During its ongoing review of misleading packaging, Plus has received hundreds of tips, and the phenomenon is also well known among Swedish consumers.

- Even with a quick purchase decision, you should be able to get a reasonable picture of a product's properties.

This has not really been achieved here and there are also many other examples of this, says Jan Bertoft.

Do you feel cheated by a package?

Here you can leave your tip