From "Red, Green, and Blue" to the Four Years of Xiong'an

China News Service, Xiong'an, April 1st, title: Looking at the changes in Xiong'an in four years from the "red, green and blue"   China News Agency reporter Lu Da, Cui Tao and Chen Lin   With the in-depth advancement of the coordinated development of Beijing-Tianjin-Hebei, the "city of the future" Xiong'an is no longer mysterious. In the four years since its establishment, how to promote the c 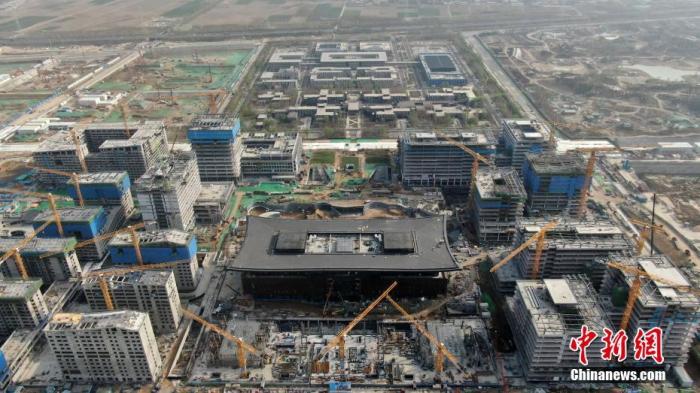 China News Service, Xiong'an, April 1st, title: Looking at the changes in Xiong'an in four years from the "red, green and blue"

With the in-depth advancement of the coordinated development of Beijing-Tianjin-Hebei, the "city of the future" Xiong'an is no longer mysterious.

In the four years since its establishment, how to promote the construction of Xiongan New Area with high standards and high quality?

The answer to this question lies in Xiongan's "red, green, and blue" considerations.

Known as the "Pearl of North China", Baiyangdian Lake is the largest freshwater lake in the North China Plain. It was also the main battlefield for the Yan Ling team to ambush Japanese invaders during the War of Resistance Against Japan.

From its establishment in 1939 to the liberation of Anxin County with the main force in 1945, the geese team grew from more than 20 people to more than 120 people. They fought with the enemy more than 70 times and killed and captured nearly 1,000 Japanese and puppet troops.

More than 70 years later, the "Goose Ling Spirit" is still shining in this land.

The Xiongan New District is developing, and the red culture is also being inherited and carried forward.

On the 1,770 square kilometers of land in Xiong’an New District, there are more than 300 construction sites with tower cranes, and more than 120 major projects are advancing simultaneously. 160,000 builders from all over the country are working day and night, which also gives a new interpretation of the "Goose Ling Spirit".

From "consolidating the foundation" to "uplifting", anchoring high-quality development, holding the "key of development" as the "Xiongan Service" brand and optimizing the business environment, Xiongan New District will write a more magnificent New era answer sheet.

The picture shows the construction site of the start-up area of ​​the Xiongan New District in aerial photography on March 31.

Planting greens first, then building the city, this is a new construction concept proposed at the beginning of the establishment of the Xiongan New District.

On November 13, 2017, the first tree was planted on plot 9 of "Millennium Xiulin" in Xiong'an New District.

Huang Xuechen, the senior business director of China Xiong'an Group Ecological Construction Co., Ltd., who was the third generation of Saihanba, has become the first batch of builders of "Millennium Xiulin".

She said that the Xiongan New District uses scientific methods to plant afforestation, use information technology to manage forests, and choose native, long-lived, precious and beautiful tree species in accordance with local conditions, and has formed a lush, near-natural forest landscape.

Each tree has a two-dimensional code sign, which records the entire process from the nursery to planting, management, and growth.

"We have an ingeniously conceived design of'No Word Couplets', which integrates the beauty of nature into the landscape and the beauty of humanity into the invisible." Hu Zegang, Project Secretary of the Construction Project of Xiong'an Country Park Xiong'an Park of China Railway First Group Said that this "no-character couplet" was constructed to represent "autumn and winter landscapes, forests, fields, lakes, plums, chrysanthemums, woods, waters, fires, and earth" 14 kinds of unique scenery.

These 14 thematic nodes are distributed on both sides of the axis of Chinese civilization in the form of couplets. The upper line is the sky, and the four seasons of the mountains and rivers are the changing scenery, and the lower line is the ground, detailing the customs and humanities of the eight directions.

Blue is also the background color of Xiongan's scrolls.

One of the blue of Xiong'an lies in water.

The blue of Xiong'an lies in the sky.

The blue of Xiong'an lies in drawing a blueprint to the end.

In the four years since the establishment of the Xiongan New District, it has achieved important phased results. The “1+4+26” planning system and the “1+N” policy system have been formulated with high standards, and a major shift from planning as the center to construction as the center has been achieved.

At the Xiong'an Government Affairs Service Center, the words "Do it now, do hard work" are very eye-catching.

"One seal manages to the end" has received unanimous praise from enterprises.

At the same time, the Xiong'an New District launched the "Xiong Talent Plan".

Select a group of outstanding talents at home and abroad, and increase the introduction of academicians of the two academies, relevant industry leaders, and innovative teams.

At the same time, it will increase the protection of talents, optimize the admission policy for children of talents, strive for preferential policies for college entrance examinations, promote the establishment of green channels for medical treatment in Beijing, Tianjin and Hebei, and promote the convergence of social security levels with Beijing and Tianjin.

In the future, Xiong'an will do a big essay on "building a nest and attracting phoenix".

Xiong’an New District will actively carry out investment promotion work around the function of relief, fully promote the introduction of leading enterprises and excellent teams, and comprehensively enhance the supply chain, industrial chain, and innovation chain supporting capabilities of the new district.