Covid, 1.1 million tons of unsold food and wine since the beginning of the pandemic

Easter in the red zone costs 1.7 billion at the table Share 01 April 2021 With the anti-Covid measures envisaged by the latest decree for the entire month of April, unsold food and wines have risen to 1.1 million tons since the beginning of the pandemic due to the collapse of the activities of bars, taverns, restaurants, pizzerias and farmhouses that overwhelm entire sectors of the Made in Italy agri-food industry. This is what emerges from the fi 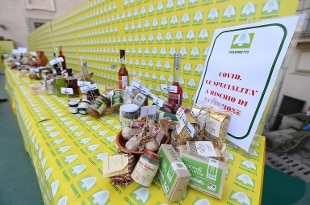 01 April 2021 With the anti-Covid measures envisaged by the latest decree for the entire month of April,

unsold food and wines have

since the beginning of the pandemic due to the collapse of the activities of bars, taverns, restaurants, pizzerias and farmhouses that overwhelm entire sectors of the Made in Italy agri-food industry.

This is what emerges from the first Coldiretti report

on the impact on the agri-food chain of the closures

decided by the Council of Ministers released on the occasion of the Coldiretti Summit with the "Recovery 'Food' Government, Italy starts from food" organized with the Italian sector.

Local products at risk of extinction

To the economic and employment damage is added the risk of extinction for over 5 thousand local food and wine specialties, from cheeses to cured meats to sweets, due to the lack of market outlets due to the absence of tourists and the closure of restaurants and farmhouses where the traditions from the fields to the table have been handed down for centuries.

In danger with the pandemic there is also the national primacy of biodiversity conquered by Italy in Europe, which offers employment opportunities to tens of thousands of families in inland areas often without real alternatives.

According to Coldiretti estimates,

have never reached the tables in the last year

Numbers behind which there are tens of thousands of farmers, breeders, fishermen, winegrowers and cheesemakers who suffer together with restaurateurs.

The 7.4% increase in food spending by Italian families in 2020 due to the longer time spent at home, did not compensate for the failure

of the restaurant industry

, whose turnover was halved (- 48%) with the result that consumption food has fallen to a minimum for at least a decade down by 30 billion.

Easter in the red zone

The three days of Easter in the red zone cost

€ 1.7 billion for the 360,000 restaurants, bars, pizzerias and agritourisms that were forced to close

throughout Italy on one of the most important weekends of the year from an economic point of view.

This is what emerges from an analysis by Coldiretti on the impact of the lockdown for the upcoming holidays.

The losses of the catering are then added to those of the entire tourism system with the substantial zeroing of presences, impacting on expenses for food, accommodation, transport, shopping and souvenirs.

Without the lockdown, according to Coldiretti, one in three Italians (32%) would have taken advantage of the Easter and Easter Monday holidays to take a holiday.

who, taking advantage of Easter, would have stormed Italy in April

, which are already worth 80% of turnover at this time, the red zone at Easter further reduces the economic sustainability of catering activities, so much so that many prefer to keep the shutters down.

The intermittent openings and limitations, argues Coldiretti, create obstacles to the planning of activities based on the purchase and sale of perishable products.