Concern for the condition of Mila Ximénez who, according to Semana magazine, has had to be admitted to a Madrid hospital. Apparently, the doctors at the Hospital de la Luz ... 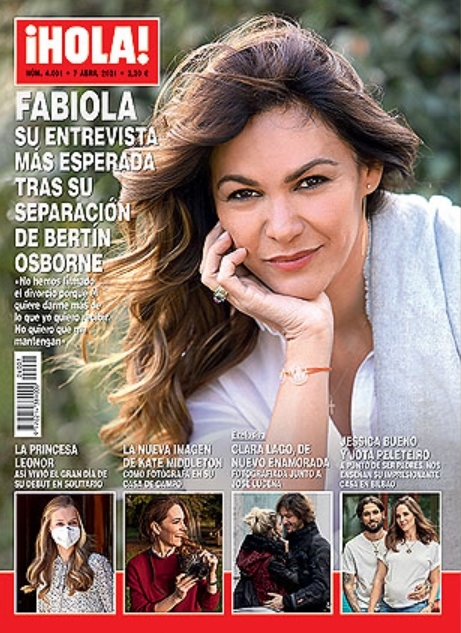 Concern for the condition of

, has had to be admitted to a Madrid hospital.

Apparently, the doctors at the Hospital de la Luz who treat the collaborator, who has been fighting lung cancer since last June, decided on Sunday that Ximénez should be hospitalized.

Thus, the Mediaset commentator went to the aforementioned hospital on Monday accompanied by

her brother and sister-in-law.

, who is accompanying Mila in this situation whenever she can, recently had to return to Holland, where she lives, to attend to some commitments.

The surprising fight between Fabiola and Bertín

In a world and an era in which we are used to the fights of exes in court to increase the amount of money or assets that correspond to each one, it is hard to believe that in the case of

Bertín Osborne and Fabiola Martínez it

is just the opposite.

We have not signed the divorce because he wants to give me more than I want to receive. I do not want them to support me

says Fabiola Martínez on the cover of Hello !, the first interview he has given since their separation.

And beware, another novelty: Fabiola

has not been charged

for this exclusive in which she also tells that she wants to go back to study, that she would like to write a book ...

It was clear that

was going to have consequences.

And one of them seems to be his daughter,

, who finds no consolation for this difficult time that her family is going through.

Count Ten Minutes that the young woman is taking refuge in her father,

The magazine publishes some photos of the

between father and daughter in Malaga, after Antonio David spent a few days in Madrid where he met with his

to draw up his strategy in the face of possible lawsuits.

In the images you can see how Rocío breaks when hugging her father.

was a friend of

lived in Argentona (Barcelona) with

And it is that according to account in the magazine

to that alleged mistreatment that Rocío Carrasco claims to have suffered at the hands of her ex-husband.

He even claims to have kept and locked an audio recording with the details of an alleged assault.