200 vehicles on fire at industry in Morjärv - VMA issued

Shortly after five o'clock on Wednesday morning, an alarm came about a fire at an industry in Morjärv in Kalix municipality. According to the rescue service, a building is completely overheated and the roof has collapsed on a room with about 200 vehicles. 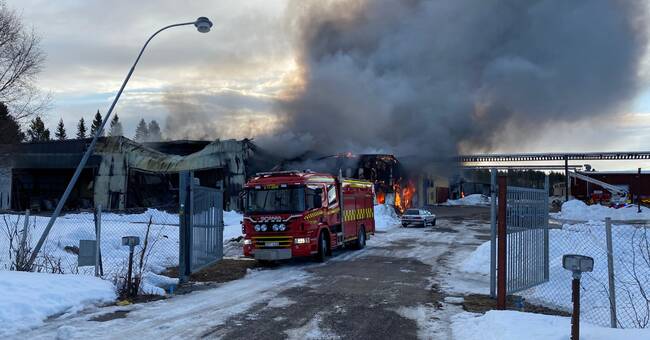 The rescue leader urges everyone in the area to go indoors and close doors, windows and ventilation, according to a VMA.

According to the alarm to SOS, it will burn in a garage building by the industry.

200 vehicles in the building

When the rescue service arrived, the building was completely overheated.

A roof must also have collapsed.

- According to our information, about 200 vehicles will be stored in the building, says Björn Pettersson, RLC officer at the police command center.

To accommodate so many cars, the building is large.

- We estimate it to be 2,000 square meters in size, says Conny Qwarfort, internal commander of the rescue service.

Police arrived at the scene at 06:00 and eight units from the rescue service are currently on site to fight the fire.

At 06:12, the rescue service's internal commander says that everything is being done to prevent the fire from spreading to nearby buildings.

- There are motorhomes, boats and other vehicles in there.

There is heavy black smoke and gas tubes explode in time and out of time.

We have gone out with VMA (important message to the public) to residents in the area, says Conny Qwarfort.

According to SOS Alarm, the rescue service received help from a tractor to force a locked gate to enter the area.

- When the first force comes here, we are told that it is completely overheated, we had to focus on rescuing what was next door, says rescue leader Patrik Juhlin.

“It is burning in an industrial premises in central Morjärv in Norrbotten County.

The rescue leader urges everyone in the area to go indoors and close doors, windows and ventilation. ”

At present, there are no reports of any injuries.

The owner of the affected business will hold a press conference at 9 a.m.

The article is updated regularly