The high-tension trial of former white police officer Derek Chauvin began Monday, March 29 in Minneapolis. At the heart of this trial, the video of the death of George Floyd. This video, which had triggered ... 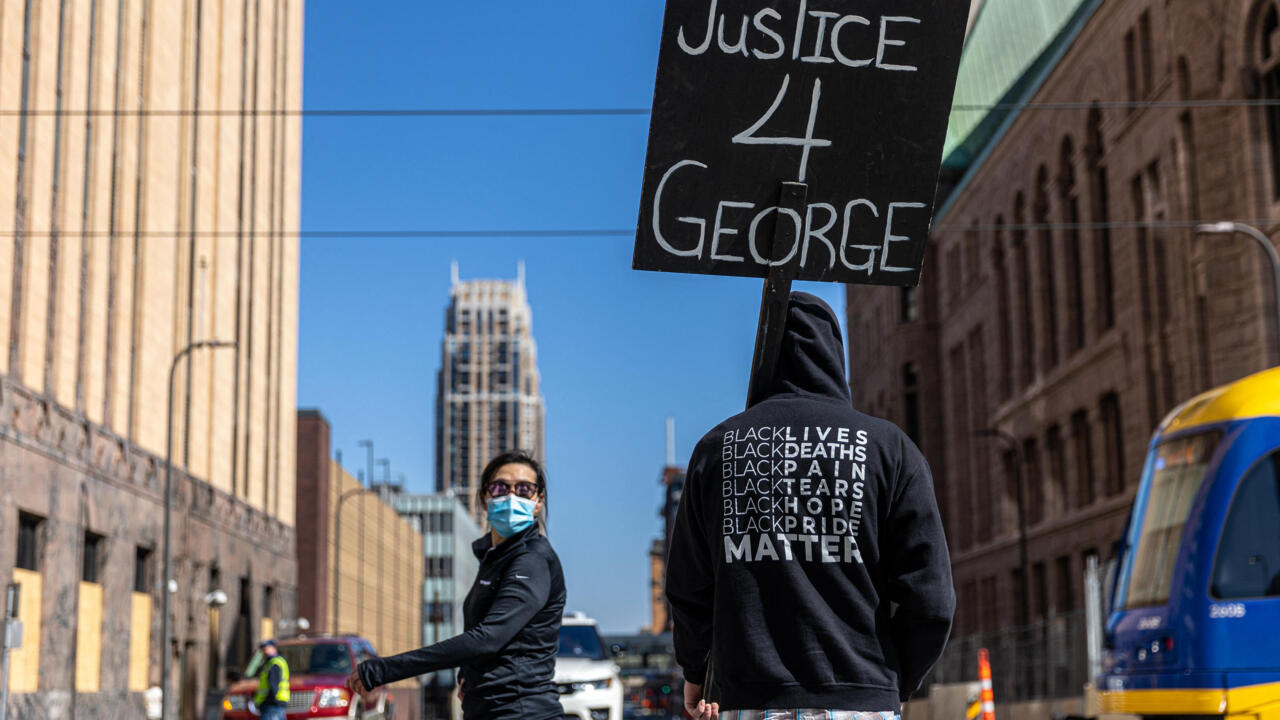 A protester holding up a "Justice for George" sign in front of the court where Derek Chauvin is being tried, March 29, 2021. © KEREM YUCEL / AFP

At the heart of this trial, the video of the death of George Floyd.

The video, which sparked months of protests across the United States this summer, was shown in court on the first day of court hearing.

With our correspondent in the United States

Without this video, there would be no George Floyd case.

The images of his agony were therefore broadcast from the opening of Derek Chauvin's trial.

► To (re) read: Death of George Floyd: 8 minutes and 46 seconds, the reasons for the death examined by the parties

On 27 occasions the African-American repeats that he can no longer breathe, crushed under the knee of the ex-white police officer, who remains impassive to him.

during all this time, Mr. Chauvin, do not move

", comments the prosecutor at the opening.

That day, Derek Chauvin and three other officers were trying to arrest George Floyd on suspicion of using a fake $ 20 bill to buy cigarettes.

A misdemeanor which prosecutors say could have been dealt with by a subpoena instead of an arrest.

For prosecutor Jerry Blackwell, these images are proof that Derek Chauvin is guilty of murder.

Mr. Derek Chauvin betrayed his badge by using excessive and unreasonable use of force on Mr. George Floyd's body,

The case is not so simple, responds the defense.

According to Eric Nelson, lawyer for Derek Chauvin,

the cause of death of George Floyd

is in fact drug use and heart failure.

Derek Chauvin did exactly what he was trained to do during his 19 year career,

He faces up to 40 years in prison if convicted of the most serious charge.

It is enough to convince a single juror of this version to cancel the trial because a conviction for murder of Chauvin must be decided unanimously by the jury.

However, in the United States, in the vast majority of cases, the rare white police officers prosecuted for murder are generally acquitted.

From the White House, Joe Biden says he is following this trial very carefully, the outcome of which in about a month

Because in case of acquittal, the demonstrators in Minneapolis warn: the protests will start again with the same intensity as last summer.

► To (re) read: United States: Benjamin Crump, the tireless defender of African-Americans victims of racism

Death of George Floyd: 8 minutes and 46 seconds, the reasons for the death examined by the parties

In the News: the death of a Salvadoran woman in Mexico recalls the American "George Floyd affair"