Where the fun ends: From risky fun with the quad

Quads are cool - that's how some see it. The four-wheeled fun vehicles without a crumple zone are dangerous - that's how others see it. Young people in particular literally go for it, and in spring they reappear. Above all, accident researchers note a tendency. 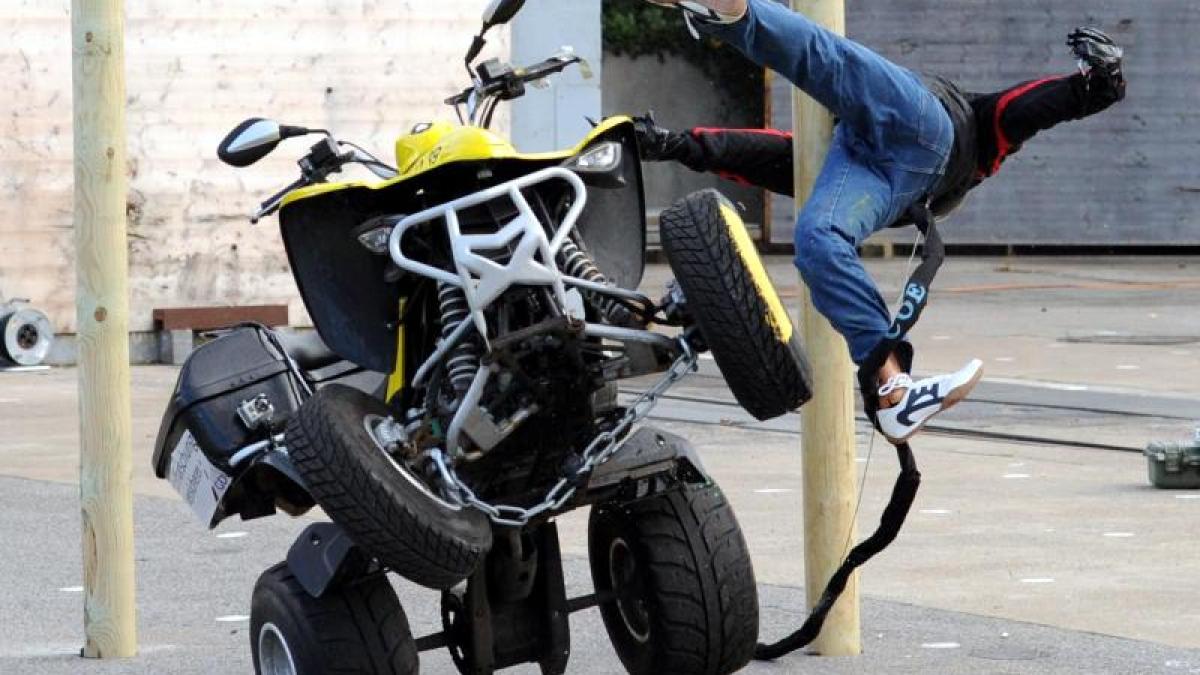 You want it, completely normal.

And the risk of accidents?

Don't think about it, it should be fun.

And indeed: in mid-February, the police in Bitburg in the Eifel caught a nine-year-old boy at the wheel of a quad - with a seven-year-old co-driver.

Before things got worse, the police intervened.

But spring is approaching, and that's quad time.

Reports such as: "Quad falls into a ditch - 17-year-old has a fatal accident" or "Quad drives in a group of people with children - three seriously injured" are already increasing.

Although they have been part of the street scene for years, hardly anyone knows how differently quads drive - and how dangerous they are.

Unlike motorcycles, the centrifugal force doesn't help them when cornering, explained Siegfried Brockmann, head of accident research at the insurers in Berlin.

In addition, there is a short wheelbase and there is no power steering either - which is why the four-wheeled fun vehicles "took off very quickly" when driving too fast in curves.

The ADAC warned that quads are more likely to be built for loose ground and terrain.

Often they don't have a differential, which takes some getting used to - inexperienced or overwhelmed drivers in particular are at risk of accidents.

However, Brockmann emphasized that the problem of the missing differential gear had been solved today.

A differential ensures that wheels turn at different speeds in curves, the inside wheel turns a little slower, the vehicle remains easy to steer.

Without such a transmission, all wheels turn at the same speed when accelerating, "in extreme cases" the vehicle will be carried straight out of the curve, explained an ADAC spokeswoman.

Quads are also often equipped with balloon tires, the pressure of which is comparatively low, so they only respond indirectly to steering maneuvers.

In bends, the reaction is delayed, but then suddenly and violently - so many drivers initially give in too much.

But since the center of gravity is high and the lane is narrow, the fun vehicles threatened to tip over.

But are the number of accidents of the little runabouts with their cute, fat tires actually increasing?

According to ADAC, there are no figures on accidents with quads, neither from previous years nor current.

Marcus Schmieder from the Hanover police also explains that accidents involving quads are not recorded individually.

Accident researchers do not have exact figures either.

From a time series based on figures from the Federal Statistical Office, however, there are 389 casualties - including passengers - in 2019, including 12 dead and 153 seriously injured.

A clear trend: the proportion of quads as the main cause of the accidents recorded is increasing, explained Brockmann.

In the case of the lighter quads, the proportion rose from 61 to 67.9 percent.

But how many quads are actually on the road in Germany?

The Federal Motor Transport Authority has recorded quads as “light four-wheeled vehicles”, of which there were exactly 109,274 in Germany in January 2020, as spokesman Stephan Immen explains.

Brockmann estimates that, including heavier quads and vehicles used for agriculture, around 180,000 units are likely to drive nationwide.

The problem: The risk of being seriously injured or even killed in an accident is ten times higher with a quad than with a car, explained Brockmann.

The risk of accidents per kilometer driven is twice as high as with a car, but the fun vehicles are not used on long journeys.

That was the result of a study by accident researchers in 2013 - the situation has not changed.

For example, a 32-year-old died last year in Schiffdorf in the Lower Saxony district of Cuxhaven who rammed his quad into a tree after a level crossing and then fell three meters into a ditch.

The fact that the number of accidents is currently "felt" to increase is probably due to the fact that spring is coming - and with it the quads, said Brockmann.

Neither the corona pandemic nor the lockdown changed that.

On the contrary: "People are looking for small escapes."

KBA registration numbers as of January 1, 2020