The increase in family spending for holidays is strengthened by the prospect of closure for table and counter service until April 30 of all 360 thousand bars, restaurants, pizzerias and farmhouses present along the entire peninsula with a 7 billion dollar crack the whole month, emphasizes the farmers' association 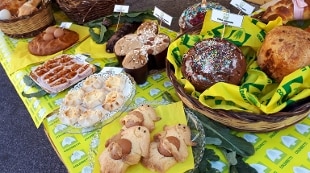 March 28, 2021 Without the possibility of shopping, restaurants closed and with the prospect of Easter protected to cook at home, at the weekend Italians storm the supermarkets, food shops and farmers' markets of Campagna Amica where an increase in spending is estimated on average 20% along the Peninsula, compared to last week.

It emerges from Coldiretti's analysis that highlights the tendency of Italians to seize one of the few opportunities to leave the house at the weekend to stock up on food products for Holy Week with the taking up to Easter Monday of the most restrictive measures to contain infections.

Together with pharmacies, the food shops are among the few retail stores to remain open throughout Italy including the red areas with orderly queues outside the structures.

The basic products of the Mediterranean diet such as fruit and vegetables but also pasta, rice, flour, sugar, meats, cheeses and wine to be placed in the pantry are the most requested on the shelves, according to the monitoring of Coldiretti.

But the real stars of the cart right now are the eggs, a fundamental ingredient to support the new passion for cooking of the Italians forced to spend weeks at home.

Sodas for breakfast, hand-painted to embellish the houses and the tables set, but above all used in homemade, artisanal and industrial pastries and desserts will be around 400 million free-range eggs consumed during Holy Week. .

In fact, in one in 3 families (31%) this year typical Easter sweets are prepared at home in compliance with local traditions, according to the Coldiretti / Ixé survey.

The increase in family spending for holidays is strengthened by the prospect of closure for table and counter service until April 30 of all 360 thousand bars, restaurants, pizzerias and farmhouses present along the entire peninsula with a 7 billion dollar crack the whole month, according to Coldiretti.

"A heavy decision - underlines Coldiretti - after the Easter lockdown which represents an important moment for restaurants and for the 24 thousand agritourisms present in Italy, particularly appreciated by families on spring weekends. catering with an avalanche effect that has overwhelmed entire sectors of the Made in Italy agri-food sector with unsold wine and food ".

It is estimated that 300 million kilos of beef, 250 million kilos of fish and seafood and about 200 million bottles of wine never reached the tables of local restaurants in 2020 with tens of thousands of farmers, breeders, fishermen, winegrowers and cheesemakers who suffer together with restaurateurs.

"The increase in household food spending does not in fact compensate for the heavy loss suffered by the intermittent openings of restaurants and the collapse of tourism that caused an overall loss in turnover of 11.5 billion due to failures in 2020 alone - concludes Coldiretti sales of food and drinks "