A woman was killed and five people were stabbed to death in Vancouver, Canada

A woman was killed and five people were stabbed to death in a quiet neighborhood in Vancouver, in western Canada, as police quickly arrested the attacker, whose motives remain unknown. Six people were taken to hospital after the attack, which occurred early Saturday afternoon local time near a municipal library in the relatively upscale Lynn Valley neighborhood in Canada. 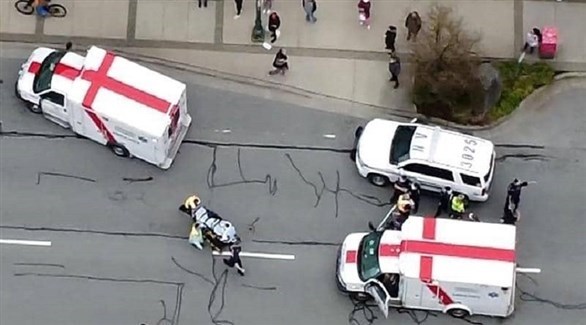 A woman was killed and five people were stabbed to death in Vancouver, Canada

A woman was killed and five people were stabbed to death in a quiet neighborhood in Vancouver, in western Canada, while police quickly arrested the attacker, whose motives are still unknown.

Six people were taken to hospital after the attack, which occurred early Saturday afternoon local time, near a municipal library in the relatively upscale Lynn Valley neighborhood in North Vancouver, shocking.

The police said that a woman among the wounded, whose identity was not revealed, later died of her injury.

Sergeant Frank Jang of the Criminal Police said during a press conference that the suspect is known from the police forces and has precedents, it seems, without any further explanations.

It is likely that the investigators acted alone, but they are not aware of his motives.

They have not yet questioned the arrested person, and have not revealed his name.

"We think the arrested person is the only suspect. We think we know who, when, how and where. We should now know why," Zhang said.

The attack, which took place in a quiet neighborhood in the north of the city on the Atlantic Ocean, shocked police and witnesses.

"To say the least, the attack shocked everyone, even the police," Zhang told reporters at the crime scene.

"Randomly" - Justin Prasad, who works near the library, told Agence France-Presse: "It was especially shocking that he stabbed people randomly. And after he started stabbing people near the library, chaos ensued, I saw him confronting the police, and then he fled and the police chased him, surrounded him and threw him to the ground."

CTV broadcast a video clip showing the arrest of the suspect, who appeared to be stabbing himself in the leg before collapsing and being arrested by the police.

Sergeant Jang asked potential witnesses to provide statements and people with video clips to hand over to investigators instead of posting them on social media.

Witness Shayla Dyson told "CTV" that she saw a man stabbed a woman, as it appeared that there was a link between them as the attacker continued to stab randomly.

"My heart is in North Vancouver tonight," the Canadian Prime Minister expressed condolences in a tweet to the families of the victims, adding, "To all those affected by the violent incident in Lynn Valley, know that all Canadians sympathize with you and wish a speedy recovery for the wounded."

Andrew Cocking, who lives 500 meters from the library, told AFP that the attack took place in a generally quiet area.

He added, "I saw people receiving first aid from paramedics next to a car and also next to a restaurant, before they were taken on stretchers."

He described the matter as "very sad, especially since one of them was apparently a child," noting that his brother "was in the library only 30 minutes before the attack and my father intended to go to it to borrow a book. It is sad that these people find themselves in the wrong place." At the wrong time. "