Current Affairs News Eyes丨Xi Jinping went to Fujian again for inspection, these points of concern have been consistent

Where do people's correct thoughts come from? It can only come from social practice. From 1985 to 2002, Xi Jinping worked in Fujian for 17 and a half years. His exploration and practice in Fujian have the significance of traveling through time and space, and has become an important source of living water for him to govern today's China. In the middle of the spring of Xin Chou, Xi Jinping went to 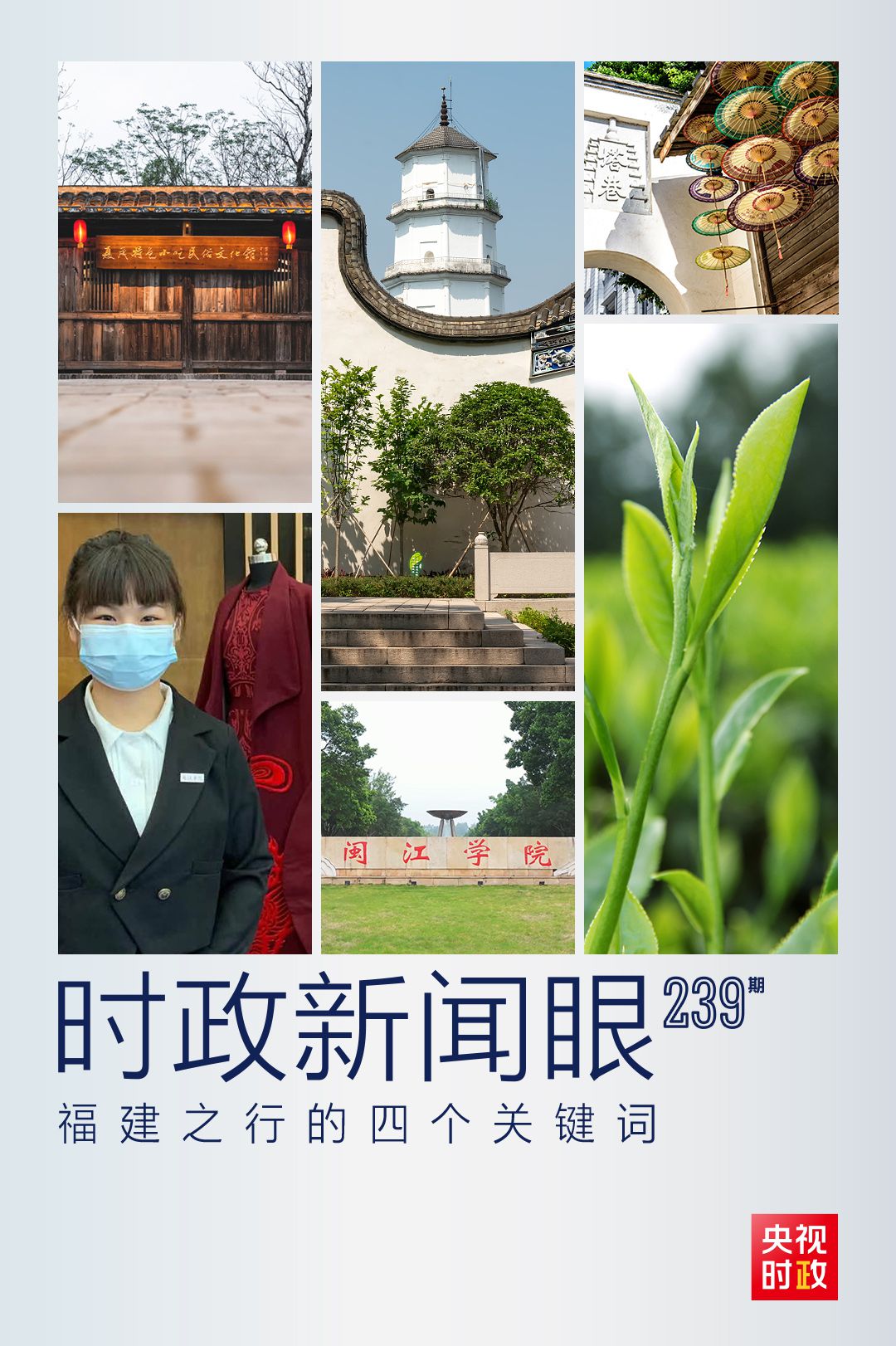 Where do people's correct thoughts come from?

It can only come from social practice.

His exploration and practice in Fujian have the significance of traveling through time and space, and has become an important source of living water for him to govern today's China.

In the middle of the spring of Xin Chou, Xi Jinping went to Fujian again. Through his consistent focus, we can see his plan for promoting the "14th Five-Year Plan" to start a good start, and we can also realize his long-lasting and deepening of the land of Bamin feelings.

Reform and innovation are consistent

The first inspection after the National Two Sessions this year lasted four days.

From March 22 to 25, Xi Jinping's daily inspection itinerary is inseparable from reform and innovation.

During his work in Fujian, Xi Jinping promoted a series of strategic and forward-looking reform and innovation measures based on in-depth investigations.

During this inspection, he revisited the reform "experimental field", "checked and accepted" the reform results, and made key instructions.

Fujian is mountainous, forested, and green, but forestry work was once "seeing forests but not people", ignoring the interests of forest farmers.

In June 2002, Xi Jinping, then governor of Fujian Province, went to Wuping County, which was the first to explore the reform of the collective forest rights system, to investigate.

He pointed out that the direction of the forest reform is right, and the key is to really benefit the people.

As a result, Wuping County became the first county in the country for forest reform, and the forest reform has also become a national decision.

During this inspection, Xi Jinping was investigating the reform of forest tenure in Shaxian County.

He pointed out that we must adhere to the correct direction of reform, respect the pioneering spirit of the masses, actively and steadily promote the innovation of collective forest rights system, explore and improve the value realization mechanism of ecological products, and strive to achieve new breakthroughs.

Fujian Sanming is well-known throughout the country for its medical reform. The "three-medicine linkage" and "two-invoice system" initiatives that originated here have successively become the top-level plan for the national medical reform.

Although the medical reform of Sanming was initiated after Xi Jinping went to work in the central government, he gave this reform a "reassuring pill" at a critical moment: The general secretary has repeatedly affirmed the experience of Sanming's medical reform at important meetings and asked for summary and promotion.

In the depths of Wuyi Mountain, an encounter with the general secretary in a tea garden made a "mysterious team" that had been born for 22 years and became known as the special commissioner for science and technology.

The "Katepai" system, which originated in Nanping, Fujian, is an innovation in the working mechanism that Xi Jinping cared about, guided, summarized and improved back then.

During this inspection, the General Secretary once again made it clear that the system of scientific and technological commissioners should be further promoted.

△ Liu Guoying is the first batch of science and technology commissioners in Nanping City.

(Photo by Pan Yi, a reporter from Central Broadcasting Corporation)

Innovation does not matter "origin"

Every time he goes to Fujian for investigation and research, Xi Jinping has to take a look at the company, focusing on independent innovation.

This time at Fujian Fuguang Company, the general secretary learned in detail about the technological innovation of the enterprise.

He emphasized that our country must rely on innovation to enter the first phalanx of scientific and technological development, and blindly following it will not work.

The general secretary also issued a "recruitment order": innovation does not matter "origin", as long as anyone can contribute to the country, he will support whoever.

This is a group photo of Fuguang employees in front of the building after the activity on that day.

From promoting the reform of state-owned enterprises in Fuzhou, to summarizing "Jinjiang experience" in Jinjiang, from advocating "one building office" and "do it right away", to starting the nation's first battle against table pollution, Xi Jinping has always been a reformer And doers.

Since the 18th National Congress of the Communist Party of China, we have embarked on an imposing and magnificent reform process.

During the "14th Five-Year Plan" period, reform has reached a new juncture. We must play the key role of comprehensively deepening reform in building a new development pattern.

This is the "footnote of reform" of Xi Jinping's trip to Fujian.

On the morning of March 25, the last activity of this inspection was to listen to work reports of the Fujian Provincial Party Committee and the Provincial Government and deliver important speeches.

In the first two days of this inspection, Xi Jinping separately investigated the tea industry and the snack industry.

This is also the characteristic industry that he cared about and guided that year.

During this inspection, the general secretary came to Wuyi Mountain, the birthplace of oolong tea and black tea.

He pointed out that it is necessary to make overall plans for tea culture, tea industry, and tea technology, adhere to the direction of green development, and strengthen brand awareness.

In recent years, under the guidance of Xi Jinping, Shaxian Snacks have deeply explored the expansion space of the snack industry and promoted the transformation and upgrading of standardization, chaining and industrialization.

During this inspection, Xi Jinping once again "weapon" in Xia Mao Town, Shaxian County: Based on the current achievements, Shaxian snacks should be explored, improved, and done better, and continue to lead the coquettish.

Twenty years ago, Xi Jinping made the strategic decision to build a "digital Fujian" and personally served as the leader of the "digital Fujian" construction leading group, allowing Fujian to enter the fast lane of the digital economy.

During this inspection, Xi Jinping emphasized the need to accelerate the promotion of digital industrialization and industrial digitization.

While listening to the work report of the Fujian Provincial Party Committee and the Provincial Government, Xi Jinping pointed out the direction for Fujian’s high-quality development: making greater progress in accelerating the construction of a modern economic system, showing greater deeds in serving and integrating into the new development pattern, and exploring the strait Greater progress has been taken on the new road of cross-strait integration and development, and greater breakthroughs have been achieved in creating a high-quality life.

How important is ecology to Fujian?

△On the viewing platform of Fudao in the countryside, you can overlook the new look of Fuzhou.

Xi Jinping focused on several things during his work in Fujian.

Changting was once one of the counties with the most serious soil erosion in the red soil region of southern my country.

After more than 30 years of overcoming difficulties, the local area has realized the historical transformation of "barren mountains-oasis-ecological homeland", creating "Changting Experience".

Mulan Creek in Putian used to be seriously flooded.

Mulan Creek has become the first river in the country to be systematically governed by the whole basin, and it can be called a model of water management.

At the turn of the century, Xi Jinping put forward the strategic concept of ecological province construction. In 2001, the Fujian Provincial Ecological Construction Leading Group was established, and he personally served as the team leader.

A series of efforts that year laid a solid foundation for Fujian to be listed as the first national ecological civilization experimental zone, to maintain the long-term forest coverage rate in the country, and to become the "ecological elite" in Fujian.

During this inspection, Xi Jinping visited Wuyishan National Park, Fushan Country Park and other places, and once again emphasized that it is necessary to adhere to ecological protection first and coordinate protection and development.

The general secretary also specifically pointed out that carbon peaking and carbon neutrality should be incorporated into the construction of an ecological province, and timetables and road maps should be scientifically formulated to build a modernization of harmonious coexistence between man and nature.

The special location and special arrangement show that Xi Jinping values ​​historical and cultural resources and the work of Bacon casting his soul.

This value of Xi Jinping has always been consistent.

During this inspection, he specially came to Zhu Xi Garden by the Jiuqu River in Wuyi Mountain.

The general secretary asked this question: If there is no Chinese civilization for five thousand years, where are there any Chinese characteristics?

The excellent Chinese traditional culture is the root and soul of the Chinese nation.

While working in Fujian, Xi Jinping instructed to protect the rare and important prehistoric relic in the country-Wanshou Rock in Sanming City, and promoted the protection of the important cultural business card-Fuzhou Sanfang Qixiang.

He emphasized that to protect traditional neighborhoods, ancient buildings, and cultural relics is to preserve the history and context of the city.

Minjiang College, located in Fuzhou, is a full-time general undergraduate college. One of its predecessors was Minjiang Vocational University founded in 1984.

While working in Fuzhou, Xi Jinping served as the principal of the school for 6 years, and the school-running philosophy he put forward has continued to this day.

On the morning of March 25, Xi Jinping revisited Minjiang College.

On the campus square, he told college students that the responsibility of the younger generation lies in the realization of the second centenary goal and the great rejuvenation of the Chinese nation.

I hope that the students will work hard to be useful to the society and people with noble morals.

△ On September 22, 1990, Xi Jinping made an investigation at Minjiang University.

The study and education of party history is being carried out throughout the party.

During his visit to Fujian, Xi Jinping emphasized that it is necessary to learn history wisely in the study and education of party history, which is the prerequisite for increasing credibility, advocating morality, and practicing.

He proposed to clarify the "three logics" and achieve "four profound understandings."

The soul of a country is transformed by writing, and cast by writing.

Only by guarding our roots and souls can we not forget the way we came, see the way under our feet, and be firm on the way forward.