The Sheikh Hamdan Bin Rashid Al Maktoum Award for Medical Sciences is a major institution with a global reputation that works to stimulate medical research, develop health services, support continuing medical education programs and spread awareness of dangerous and rare diseases. The award was launched on April 10, 1999, when it was first established. 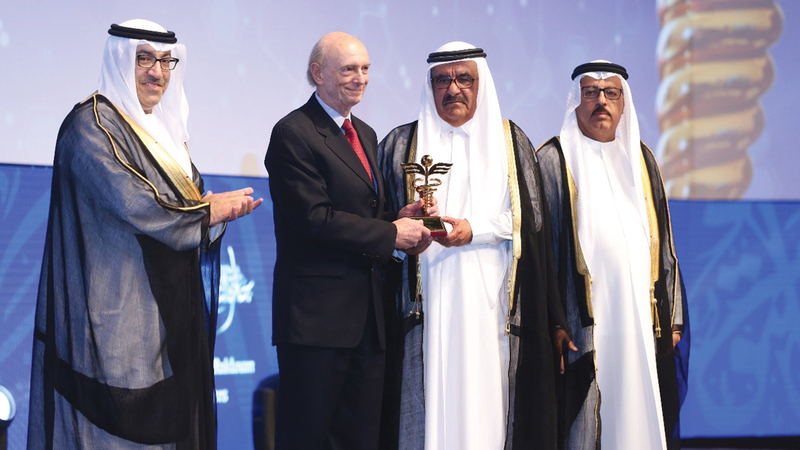 It houses a center for awards, genetic studies, and publications, and supports scientific research and continuing medical education

The award was launched on the tenth of April 1999, when the late Sheikh Maktoum bin Rashid Al Maktoum issued, at that time, the High Decree No. (5) regarding the establishment of the Sheikh Hamdan bin Rashid Al Maktoum Award for Medical Sciences, with the aim of honoring Scientists from all over the world who strive relentlessly to conduct distinguished medical research that serves humanity.

The Executive Director of the Award, Abdullah Bin Sougat, says: “The Sheikh Hamdan Bin Rashid Al Maktoum Award for Medical Sciences is the most prominent award in the Gulf Cooperation Council’s scale, and a driving force for the advancement of medical services by honoring scientists who have contributed to the development of these services worldwide, in an endeavor. To encourage other physicians to follow their example and contribute directly to the development of scientific and medical research activities worldwide.

"The award affirms the importance of supporting scientific research for its role in promoting progress in the UAE, and it plays an effective role in providing grants to researchers through pioneering programs," he added.

The award has proven to be a widespread success, and it has been recognized by international experts and senior researchers competing for the award. This success is reflected in the award’s international reputation, high academic credibility and level of performance.

The Awards Center was established in 1999, and presented international prizes and UAE awards, and in the second session in 2001-2002, a new award was added to the center, which is the Arab World Awards.

The scientific committee receives the nominations, to be sorted and evaluated by a local jury committee and then reassessed by an international jury, and each award contains terms and conditions that must be taken into account when applying for the nomination.

After the scientific committee selects the winners, the winning names recommended by the scientific committee are handed over to the general secretariat of the award, who in turn submits them to the board of trustees and then to His Highness Sheikh Hamdan bin Rashid Al Maktoum, the sponsor of the award for approval and accreditation of the winners.

The selected winners are invited to an honoring ceremony at the end of the second year of each session.

The vision of the late Sheikh Hamdan bin Rashid Al Maktoum was embodied in raising the human suffering from genetic diseases in the Arab world, by establishing the Arab Center for Genetic Studies (CAGS) on June 25, 2003, and since its inception, the center has devoted all its efforts to the mission of improving human health, through diagnosis and reduction. Of the genetic disorders in the Arab world, based on the recent development in human genetics, and in order to fulfill this great message.

Bin Sougat added: “The award was launched by the Hamdan Medical Journal, which is concerned with publishing research related to the digestive system and its various diseases.

Supporting scientific research in the UAE is one of the most important goals of the award, as it works to support distinguished medical research, and to encourage the publication of research in local and international medical journals.

The Sheikh Hamdan Bin Rashid Al Maktoum Award for Medical Sciences is concerned with supporting and promoting medical research in the Emirates, since research forms the basis of scientific and academic development for all nations of the world, and the award aims to provide financial grants for research, to encourage excellence in performance among doctors researching within the country and provide them with the necessary resources and materials And moral support, regardless of their nationalities, to contribute to the development of the medical sector.

The Sheikh Hamdan Bin Rashid Al Maktoum Award for Medical Sciences provided financial grants to 93 different research projects, and each of the applications submitted was studied and evaluated in a scientific and accurate manner by the Research Committee of the Scientific Committee, and through international referees for scientific content, and by considering the importance of research. For the UAE community and the possibility of benefiting from it in follow-up and implementation, in order to find its way to accreditation and publication in major medical journals worldwide.