Jesse Puljujärvi in ​​a brilliant draw, got into a terrible superchain: “You can't enjoy it” - McDavid also incense 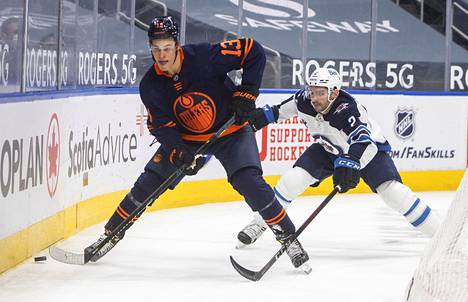 Edmonton’s Jesse Puljujärvi played a big role when the Oilers rose to a 4-2 home victory against Winnipeg in the final.

The last goal Edmonton scored was empty, but all three of the previous ones were betraying Puljujärvi - which, however, eventually got only one pass.

Still in the opening round, Winnipeg escaped his star acquisition under Pierre-Luc Dubois (1 + 1) to a 2-0 lead.

At the end of the opening round, Puljujärvi helped his puck to Connor McDavid with his strong goal-back, who scored a 1-2 reduction.

At the beginning of the final round, Puljujärvi grabbed a loose puck from the end and immediately split the long pass to the back, from which defender Darnell Nurse managed to equalize the game to 2-2.

A moment later, Puljujärvi paved the way for a situation in the midfield, from which McDavidja Leon Draisaitl escaped to a superior attack to rivet the remaining 3–2 hit.

The Finn was initially marked with a goal point, but it was later corrected.

Puljujärvi started the match in the number one chain alongside McDavid and Ryan Nugent-Hopkins.

However, Dave Tippett, head coach of the third, Oilers, joined his biggest stars McDavid and Draisaitl.

Puljujärvi took third place alongside the top two of the points exchange.

And the Tornian was by no means just participating alongside the supermen.

The chain was in a fierce stroke in the final round, and Puljujärvi, who played one of the absolute best matches of his NHL career, had a strong key to the game.

Puljujärvi, who was hugely hungry around the field, threw work and rushed straight to the finish line, played a great match overall.

The ice time was just over 18 minutes, Puljujärvi shot three times towards the goal and the power statistics rose to +3.

- Style next to the two best players in the world when you get to play, you can't enjoy it.

You just have to try to help them with your own workload all the time.

Yes, it's good to play in it, Puljujärvi commented at the press conference after the match.

The ingredients would have been harder to power, but for example, the place in number one superiority has still been under the rock.

- Almost every day is played, so there are good episodes and sometimes a little quieter.

But yes, this is a top job to get a lot of play.

- As a team, we are now in a good direction.

And let me be a part of this, it’s been good to be here.

All we can do is move forward and keep the workload high, Puljujärvi decided.

Winnipeg was in trouble with the bull-like Puljujärvi.Photo: Jason Franson / ZUMA / MVphotos

Chainmate and team captain McDavid smoked Puljujärvi after the match.

Puljujärvi karvaajista is one of the best I've seen for ages, McDavid praised.

- He deserves those wide smiles.

It’s fun to see a dude like him who has worked hard to develop, comes back to the NHL and has been great.

The victory was the third consecutive one for Edmonton.

In the league table, the team is tied with Toronto, the leader of the Canadian division, who has played two matches less.

Under the leadership of Alexander Barkov, who plays brilliant through, the Florida Panthers are convincingly heading towards the playoffs in the top division division.

The Panthers have not missed points in two matches in the tube throughout the season.

On Saturday’s round, the Panthers offset the previous game’s 1-2 loss with a 2-0 win over Nashville.

The home side worked hard to get through the middle and as a result, had a good chance of getting one back as Panthers tried lifting the ball over keeper Juuse Saros.

He was overtaken only by Barkov, who scored a 1-0 hit in the middle of the second inning.

Barkov was chosen as the number one star of the match.

Saros ’splendor extracts were noted with a second star.

Saros, who started his season quietly, has now played two matches after an injury and has phenomenally blocked 87 of all 89 shots.

It releases the eighth place on the points exchange.

Mikko Rantanen of Colorado, who relentlessly fired one more goal in a knockout 6-0 victory against Minnesota with a relentless wrist shot and houses Kaapo Kähkönen's nine-match winning streak, is at the top of the line (29 matches, 17 + 18 = 35).

Rantanen is fifth on the paint exchange.

He is the top scorer of all 24 teams playing on the U.S. side, but ahead are four Canadian Division goal guns: Auston Matthews 21, Connor McDavid 21, Tyler Toffoli 18 and Leon Draisaitl 18.