The Yemeni army forces and the tribes and the joint forces, backed by the Arab coalition, advanced on the fronts of Al-Jawf, and liberated the two strategic areas of Al-Ludh and Dikama in the vicinity of the strategic building camp, in addition to sites in Taiz and Hajjah. 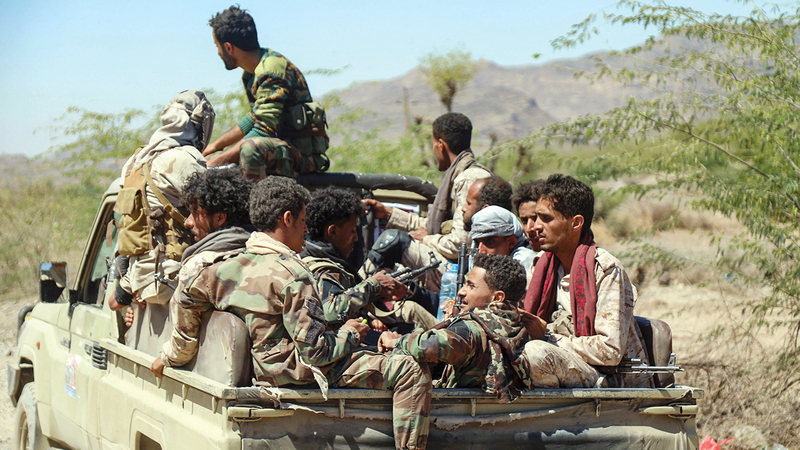 Thwarting attacks in Marib ... and putting out fires in Hodeidah

Battles continue in 3 main areas in Taiz, between the army and militias.

The Yemeni army forces and the tribes and the joint forces, backed by the Arab coalition, advanced on the Al-Jawf fronts, liberating the two strategic areas in the vicinity of the strategic building block, in addition to sites in Taiz and Hajjah. While the joint extinguished Houthi fire sources in Hodeidah.

In the details, the Yemeni army forces, backed by tribes and Arab coalition fighters, continued their advance in the Al-Jawf front, east of the Yemeni capital, Sanaa, and were able to liberate sites in Al-Luud and Dhamma, east of Al-Hazm, the capital of the governorate.

Field sources confirmed the liberation of parts of the Luudh and Dagama areas close to the strategic building of the building blocks, after reinforcements of the joint forces on the western coast arrived for the first time to the Jawf fronts, including 300 specially trained troops in desert fighting.

Last Thursday, the army and tribes forces began a military operation east of Al-Hazm to reach the Al-Labanat camp after advancing on the Bir Al-Marazeeq fronts, Al-Hadba area, and completing the liberation of Al-Aqer and Duhaida.

In Marib, the army and the tribes, backed by the joint forces and coalition fighters, continued their military operations on the Al-Kasara, Hailan, Al-Mashajeh and Sarwah fronts, leaving many dead and wounded among the Houthis.

Field sources said that the coalition fighters destroyed Houthi reinforcements that arrived from Sanaa and Amran to those fronts, leaving more than 93 people dead, including prominent field leaders who were pushed to the fronts of Marib.

The sources added that «among the dead were the head of operations of the 145th Infantry Brigade of the Houthis, Brigadier General Masoud Muhammad al-Shaiba, Colonel Abdul Wahhab Hasan Rishan, and Colonel Fadel Saleh Hasan Aqilah, two of the prominent field leaders, in addition to 17 commanders whose bodies were transported to Sana'a.

Military sources confirmed that the army and local resistance were able to liberate the strategic Jabal Jashaa and Tabet Makhdara in the Haifan district, southeast of Taiz, after battles with the Houthi militia that left 11 dead among the Houthis, 12 wounded, and seven prisoners.

On the western front, the army and resistance forces managed to thwart the Houthi attack on their positions on the outskirts of Jabal Habashi district.

In Al-Dhalea, the Martyr, Qulaia, and Al-Murra fronts in the Battar sector witnessed violent battles between the joint and southern forces on the one hand, and the Houthi militia on the other hand, after the militias attempted to advance towards those sites, they were thwarted and the Houthis sustained heavy losses.

In Hajjah, the forces of the Fifth Military Region, backed by coalition fighters, advanced on the international road linking Hajjah and Al-Hodeidah from the direction of Abs, according to field sources, confirming the advance of about 15 km towards new areas along the road.

The sources indicated that the region's forces managed to thwart five Houthi attacks, through which they attempted to regain the areas that were recently liberated, and the militias inflicted dozens of deaths, including eight prominent leaders, and seized a large amount of weapons and ammunition.

And in Hodeidah, on the western coast of Yemen, the joint forces put out Houthi fire sources and foiled their movements in the areas of Sanaa and Al Khamseen streets, and Al-Saleh city in the city of Hodeidah, during which a mobile vehicle was destroyed, and two Houthis were killed.

The fighters of the Arab Coalition to Support Legitimacy in Yemen targeted Houthi reinforcements on the Al-Jadaan road in Sana'a, which led to the death and injury of many Houthis, while battles continued on the Jadaan fronts and Wadi Hallan near the Al-Jawf Junction and Nehm Junction.

The fighters of the Arab Coalition to Support Legitimacy in Yemen launched 11 raids on Houthi sites between Sana'a and Marib, in the late hours of the day before yesterday, causing direct casualties, leaving the Houthis dead and wounded.