GUIDE: How to reward covid staff - region by region

There are big differences between how covid staff in the country have been rewarded in addition to their basic salary, SVT's survey shows. We have asked all regions: “Have you distributed an extra covid compensation in addition to the basic salary to healthcare staff in 2020? What did it look like? ” - See how your region responded in the summary below. 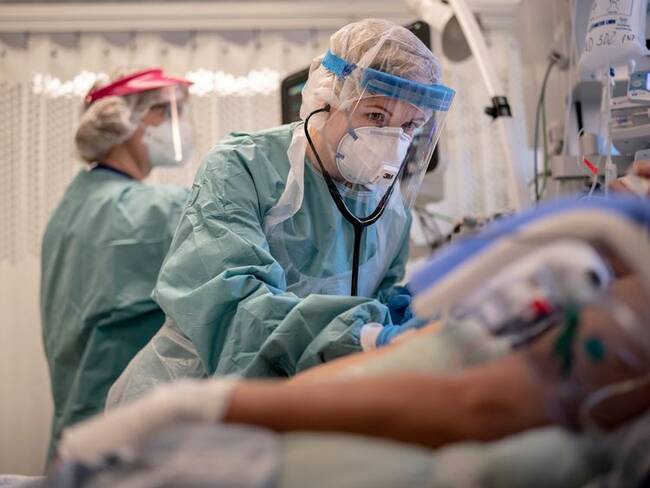 Has paid compensation of SEK 4,000 to employees who meet certain criteria.

Paid up to SEK 5,000 a month to monthly paid staff who have worked at least 50 percent in special wards with covid patients.

Staff who took extra shifts also received SEK 1,100 - 1,400 per shift, depending on the time of day, including staff on parental leave who broke their leave.

All employees in the Dalarna Region who worked April - May and were employed at the beginning of December also received a bonus of SEK 1,000.

Has not paid any special compensation for employees in covid care.

On the other hand, several occupational groups received an extra compensation of SEK 160 per hour for taking extra passes.

During Christmas, all employees in Region Gotland also received a gift card worth SEK 400.

Had increased on-call and emergency compensation for doctors within IVA.

Healthcare staff in the health care system also received SEK 1,500 extra per session during the Christmas and New Year weekends.

The region has also given healthcare staff compensation of SEK 15,000 per moved holiday week.

All employees in the Gävleborg Region also received two gift cards with a total value of SEK 1,450.

Gave 140 percent of the hourly wage extra to care staff who had to cancel their vacation during the Christmas and New Year weekend to handle the staffing.

All staff who were employed for at least three months from March also received a bonus of SEK 5,000 in December.

Did not pay any extra compensation to care staff in covid care.

All employees in Region Jämtland received a gift card worth SEK 1,000 to use in the local trade.

Paid a "work valuation supplement" of SEK 4,000 per month between April - August, to staff who worked at IVA and special covid departments.

The care staff who worked large amounts of overtime also received an increased overtime pay of 300 percent of their hourly wage.

Those who worked extra during the Christmas holidays received compensation of SEK 6,000 per extra shift that was at least four hours.

All staff also received a gift card of SEK 500.

Paid SEK 4,000 - 9,000 extra per extra session in covid care during the summer and the Christmas holidays.

Did not pay any extra compensation to his healthcare staff.

Gave the employees who worked at least two weeks in 2020 a bonus of between 500 - 3,000 kronor, depending on how much they worked during the year.

Healthcare staff who took extra shifts during the Christmas and New Year weekends received an extra compensation of SEK 160 per hour.

Has had various extra allowances for the care staff in various activities.

The compensation has been between SEK 1,200 - 3,400 extra per session, depending on the type of session and time of day.

Assistant nurses and nurses also received SEK 1,600 - 2,000 per shift to voluntarily give up holidays during the Christmas and New Year holidays.

At Karolinska University Hospital, several occupational groups received between SEK 1,200 - 3,600 extra per overtime shift and SEK 1,600 - 2,000 per revoked holiday during the Christmas and New Year weekend.

Nursing staff at IVA have had an increased hourly wage of 220 percent as well as increased overtime pay and doctors in IVA and emergency care have in some cases received double on-call pay.

The region also decided that all employees would receive a gift worth SEK 1,000 and several businesses then chose to give a gift card.

SVT lacks answers from several hospitals in the region.

Has paid SEK 100 extra per hour on weekend shifts to nurses, assistant nurses and nurses who worked in wards that received extended weekend shifts every other weekend.

They have also paid SEK 820 - 2,100 extra per extra pass depending on occupational group and type of pass.

Gave a salary supplement of SEK 500 a week to those who mainly worked with covid care.

Those who worked more than four weekend shifts during a four-week period also received SEK 50 extra per hour from the fifth shift.

During the period 11 December 2020 - 10 January 2021, compensation of SEK 135 per hour was paid during weekday shifts and SEK 160 per hour during night and weekend shifts, the same format applied to the University Hospital and the Hospital in Enköping during the period 1 June - 31 August.

As of November 2020, has given its healthcare staff a salary supplement of between SEK 8,000 - 10,000 to everyone who has switched to departments that provide covid care.

All staff also received a gift card in local trade to the value of SEK 1,000.

Did not pay any general covid compensation, however, all employees in the region received a gift card worth SEK 400.

Gave care staff in wards that mainly cared for covid patients a salary supplement of SEK 500 per week.

Gave all basic planned staff at covid-IVA an extra compensation of SEK 20,000.

Physiotherapists, nurses and assistant nurses in inpatient care who were allowed to take extra weekend shifts also received between SEK 6,000 - 7,000 extra a month.

During the second wave in December 2020 - January 2021, the staff who moved from their home clinic to covid care received SEK 200 extra per session.

All employees in Region Västmanland also received a gift card worth SEK 1,000.

Has paid SEK 500 per regular and extra pass to all care staff who work in units where only covid patients are treated and protective equipment is required.

At Christmas, a Christmas bonus of SEK 1,500 was also paid out to all employees.

Introduced since November 2020 an extra compensation of SEK 500 per week for staff who worked in covid care.

In some cases, staff received qualified overtime pay and SEK 100 extra per hour for extra shifts.

Everyone who was employed in the Örebro Region during the summer also received a gift card worth SEK 1,000.

Their care staff have received a higher remuneration in work with covid care.

As an example, a nurse who has worked full-time in a ward with over 50 percent covid patients has received a supplement of SEK 300 per work shift.

If the nurse also worked extra shifts, 290 percent of the hourly wage was also paid.