The violent outburst of emotions after the World Cup dreams crumbled did not lead to a change of maintenance man. Such guidelines for the future have now been drawn by Iivo Niskanen and Heikki Alakärppä. 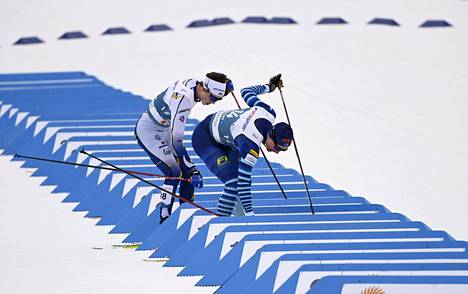 Iivo Niskanen, who was severely disappointed at the World Championships in Oberstdorf, was aiming for a victory or at least a medal for his 50 km (p) trip on Sunday, the 7th of this month.

It so happened, however, that the culmination of Niskanen's year's work is remembered for him in other things.

At first, the Finnish TV audience, with more than a million viewers, was toned when Niskanen used a loud force to ask the maintenance team on duty at the track to tell clearly which pair he should choose at the ski exchange point.

And that’s not all: For some reason, Niskanen got a pair under the ski exchange that didn’t match his perception of how it should have been handled in ski maintenance.

According to the best information, my own maintenance man had put on a little more grip glue than the athlete had specifically hoped.

The result was freezing of the grip areas, which also ate up the sharpest gliding properties of the skis.

Niskanen had to give up the top pace in the final kilometers.

He flagged the finish in 7th, but the place improved by one due to the rejection of Johannes Hösflot Kläbo of Norway.

When Niskanen arrived at the finish line, he did not register the MTV Sports photographer who recorded the events.

The world champion-Olympic winner, who threw his ski on the ground, bitterly cursed the actions of his own maintenance man, and the TV camera recorded everything.

According to the most hasty estimates, Niskanen's disappointment was so strong that the cooperation with the maintenance man in question - the experienced Heikki Alakärpä - would only last for one season.

However, on Tuesday, Niskanen revealed to Ilta-Sanomat that the events of the World Championships have now been reviewed critically but constructively with Alakärpä.

A common tone was found in the discussions, and “the table is shiny clean”.

Iivo Niskanen (right) got a pair of skis for the last less than 20 kilometers of the ski change in the 50 km race of the World Championships, which had more holding cream than he had asked to put on. Photo: Emmi Korhonen

- We have agreed on steps for the future, ie in principle towards the Beijing Olympic Games (2022) and the Planica World Championships (2023).

The cooperation continues, said Niskanen, who was generally very satisfied with Alakärpä's work this season.

Before Alakärpä, his skier was Mika Venäläinen for a long time, who was not surprised by the continued cooperation between Niskanen and Alakärpä.

The Russian himself, who tasted the temperament of the master's disappointing moment last week, reminded in Ilta-Sanomat last week that Niskanen's character is such that sometimes we go hard from zero to a hundred but also from "a hundred to zero".

The international season of skiing ended for Niskanen last weekend in Switzerland.

The Ristijärvi Finnish Championships are still ahead in a week and a half.

After that, Niskanen goes through the entire season thoroughly with his coach Olli Ohtonen and is on holiday for a while before the new training season.

Alakärppä, who started in the maintenance team of the Finnish A-national team for the first time already in 1998, is one of the most experienced ski caretakers of the entire ski tour.

Prior to his current Finland wash, he worked in German maintenance in 2007–2020.

The sequel alone does not depend on the wishes of Niskanen and Alakärpä, as every employee of the service truck will negotiate with the Ski Association this spring.

However, key factors such as the lower fly are, in principle, intended to be fixed by contracts of at least two years.