Finnish poultry has been banned from moving out. Bad news for Finnish white-fronted goose lovers. And for lovers of others, especially watery migratory birds. Alongside the corona pandemic, a more severe avian influenza epidemic is currently raging in Europe. It set off from the North Sea coastal states before the turn of the year and was first spotted by white-fronted geese and aspens. Only five cases of the disease have been reported in Fi 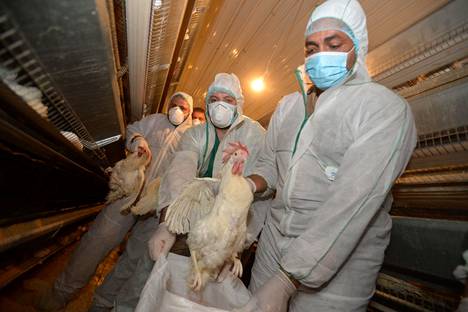 And for lovers of others, especially watery migratory birds.

Alongside the corona pandemic, a more severe avian influenza epidemic is currently raging in Europe.

It set off from the North Sea coastal states before the turn of the year and was first spotted by white-fronted geese and aspens.

Only five cases of the disease have been reported in Finland.

However, migratory birds that have wintered on the North Sea coast are only on their way to Finland.

The Ministry of Agriculture and Forestry has ordered a ban on the movement of Finnish poultry.

It protects poultry from contact with migratory birds, ie the principle is the same as the one with which Finland protected its elderly population from the corona pandemic a year ago.

The ban on the movement of poultry began on 8 February and will remain in force until the end of May, when the seasonal variation and summer typically associated with avian influenza are expected to come to the rescue.

Avian flu is found all over the world.

Pictured are health authorities investigating a chicken in Kuwait.

On Saturday, Helsingin Sanomat had a cartoon by Pertti Jarla, in which the sky was thick with migratory birds packed on the outer border of our airspace, and the text was “Mrs. Prime Minister, the birds are waiting for permission to enter the country”.

In his official capacity, he will monitor the development of the avian influenza situation in Europe.

To date, some 2,000 birds have died from avian influenza in the EU.

Great unless most of the dead birds go undetected or unexplored.

The countries most affected are Britain, the Netherlands, Germany and Denmark.

At the top of the list of dead are the large species of whooper swan (423), white-fronted goose (334) and sea goose (214) wintering on the North Sea coast.

The full list can be found at the end of this article.

Avian influenza is a disease of geese and other waterfowl in particular.

There are six chicken hawks on the list, two of which were found dead in Helsinki.

Other victims of avian influenza found in Finland are janakkala pheasants as well as wild mute swans, fish gulls and mallards.

In the archipelago, farther out to sea, there might be more.

Five doesn't sound like much, but it's more than usual, Tuupanen says.

- Typically, it is waterfowl that spread bird flu.

Birds of prey can get sick when they eat carcasses that contain the virus.

In the winter of 2005/06, bird flu also caused small-scale hysteria in Finland, and even bird boards were moved further away from human settlements or feeding was stopped altogether.

- At that time, the virus was of such a type that it could also infect people, and at least deaths became known from Asia and Egypt, Tuupanen recalls.

- This winter's virus is a cleaner bird virus and at least does not easily infect humans, except that a few mildly symptomatic human cases were reported from a poultry farm in Russia.

There are no observations of the virus becoming more dangerous this winter.

According to Tuupanen, avian influenza can be described as “seasonal influenza” of birds.

- It is commonly found in winter in Europe, but not every year in Finland.

Occurrence is affected by the type of virus.

The winter of 2016/17 was a widespread epidemic and the type of virus this winter is similar.

In the winter of 2019/20, there was little avian influenza, with the exception of the Hungarian and Polish poultry epidemic.

Poultry are protected by keeping it indoors or in sheltered outdoor gardens.

According to Tuupanen, there are no restrictions on assembly.

- Not that how many can be in one place, but poultry shows are forbidden, of course they would not be held anyway.

We are currently on a wait-and-see attitude, expecting migratory birds and waiting to see how the epidemic develops in Finland.

The species that spread the virus the most, such as mute swans or white-fronted geese, are not tested when they arrive in Finland.

Neither forced testing nor blind testing is performed, although neither species is very sensitive in the metropolitan area.

- Instead, we hope that if mass deaths of birds are found, we will be notified.

Tuupanen urges citizens to be calm.

- Birds don't have to be scared any more than they do anyway, but dead birds should not be treated with bare hands.

As early as December, the Food Agency reported that the situation in Europe was worrying for birds, as the type of bird flu found was highly pathogenic, leading to high mortality.

The H5N8 virus does not pose a risk to humans.

The Food Agency calls for the mass death of birds to be reported immediately to the municipal veterinarian or county veterinarian.

It is also a good idea to notify the municipal veterinarian of individual large birds of prey found dead.

The official veterinarians take care of the sampling.

Although the risk of infection is low, dead birds should not be grasped with bare hands.

If doing so, hands should be washed thoroughly with soap and water and disinfected with an alcohol-based handkerchief.

The availability of handhelds is now exceptionally good due to the prevailing pandemic corona situation.

Birds that have died alone and are therefore not sent for examination are advised by the Food and Drug Administration to bury to a depth of at least 40 centimeters and to choose a location that minimizes the risk to human or animal health.

The carcass can also be picked up with a shovel or disposable gloves or with an intact plastic bag and placed in a mixed waste bag.

If a bird has died in a remote location, the Finnish Food Safety Authority calls for it to be left as food for nature's own dispersing organisms, ie as part of nature's great cycle.

Birds that died of bird flu in the EU this winter

The remaining less than 10 each.