"In the event of a conflict, they must sacrifice their navies": why is NATO conducting joint exercises with Ukraine in the Black Sea

The Ukrainian Navy took part in joint exercises with NATO, such as PASSEX. The maneuvers took place in the Black Sea, the ships of Ukraine, Turkey, Spain and Romania were involved in them. The military worked out interaction as part of tactical formations, the exercises were held according to the standards of the North Atlantic Alliance. Similar events with the participation of Kiev were previously held in early February. According to experts, the Ukrainian fleet is of no value to the alliance, but NATO strategists plan to use it as a "battering ram" against Russia. 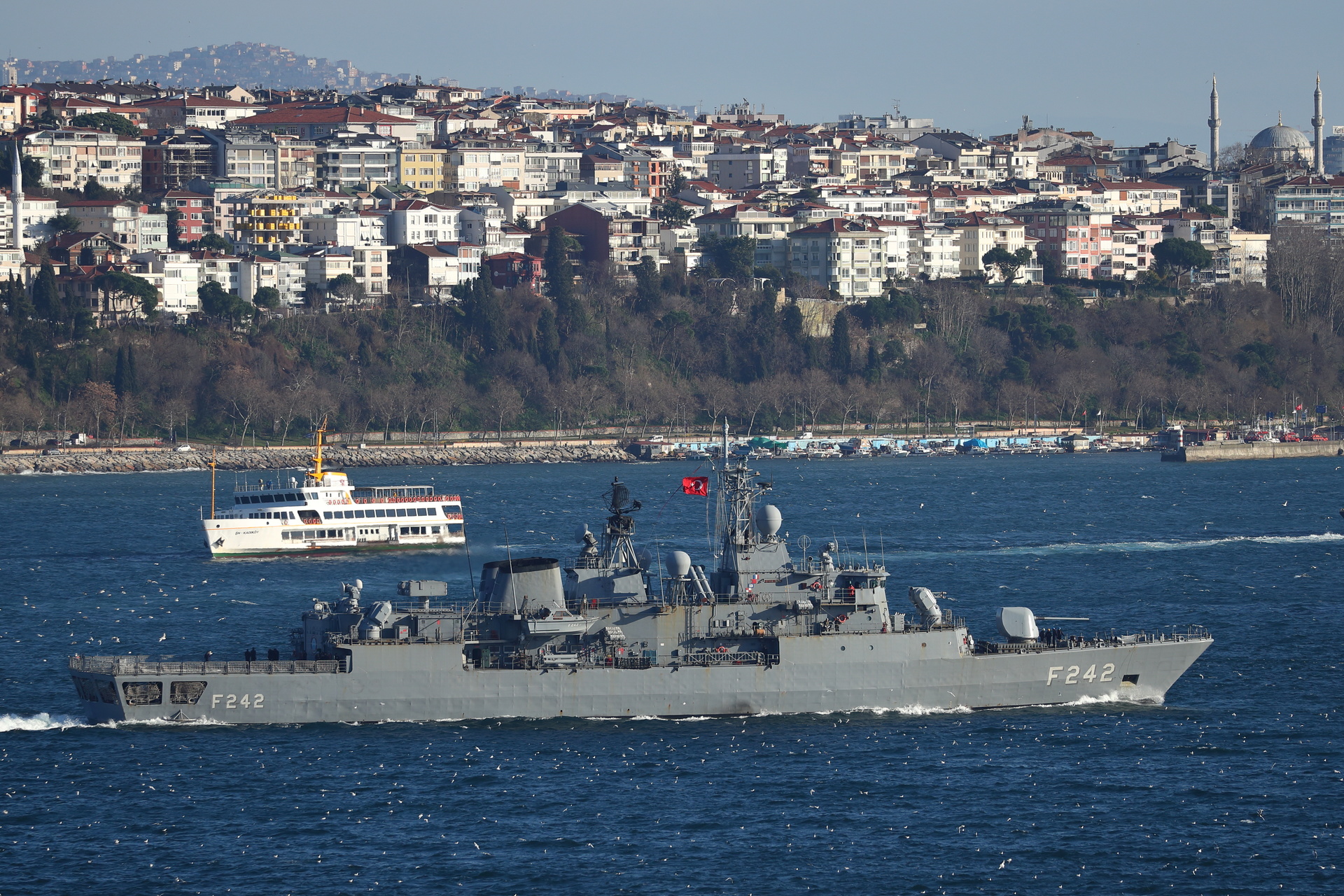 The Ukrainian Navy conducted exercises in the Black Sea together with ships of the permanent mine action group of the North Atlantic Alliance, which entered the port of Odessa on March 10.

This was reported by the press service of the Ukrainian Navy on its Facebook page.

It is clarified that a PASSEX-type training was carried out, in addition to the Ukrainian forces, the navies of Turkey, Spain and Romania took part in it.

The purpose of the exercises was to work out interaction in the composition of tactical formations of ships of the fleets of different countries.

As specified in the Ukrainian Navy, all elements of the training were planned and worked out in accordance with NATO standards and procedures.

The exercises included training in mine action, escorting ships behind trawls, elements of tactical maneuvering, as well as signal production using the international signaling system.

The Ukrainian Navy recalled that these maneuvers are not the first PASSEX-type training exercise this year with the participation of the Ukrainian fleet and NATO ships.

The previous PASSEX-type exercises with the participation of Ukraine took place in early February.

Then, in addition to the Ukrainian Navy, the ships of the US Navy took part in them.

According to the Ukrainian side, the exercises were conducted to ensure security in the Black Sea and to improve the learning ability and compatibility of the crews of the ships of the two countries.

The maneuvers included a number of areas, such as practicing tactical maneuvering, air defense, and repelling enemy strikes.

“We are delighted to work with our American partners to maintain stability in the Black Sea.

The PASSEX type training is an excellent opportunity to improve skills, maritime training and exchange of experience between the crews of our ships, ”said the commander of the Ukrainian Navy flotilla Yuriy Fedash, commenting on the February exercise.

According to experts, the PASSEX-type exercise means rapid joint maneuvers of several ships.

The main purpose of such training is to check the coherence and preparation of the crews for interaction with each other.

The term itself was first used in the US Navy.

“PASSEX is a standard exercise between the fleets of different states.

Their essence lies in practicing in practice the methods of combat coordination of the actions of the fleets and increasing the efficiency and compatibility.

These exercises took place within the framework of Ukraine's declared course of achieving full operational interaction with NATO, "said Sergei Ermakov, head of the regional security sector at the RISS Defense Research Center, in a commentary on RT.

The main goal of such events is cooperation and partnership, which has a pronounced anti-Russian aspect and is aimed at putting pressure on Russia, the expert is sure.

A similar point of view is shared by military expert Alexei Leonkov.

"These exercises are intended to work out interactions between the ships of Ukraine and NATO countries," the expert explained in an interview with RT.

The Ukrainian Navy often takes part in similar exercises organized under the auspices of NATO in the Black Sea.

So, in October 2020, exercises of the PASSEX type were held with the participation of Ukrainian and British sailors on the Royal Navy destroyer Dragon.

The ship entered the Odessa seaport at the beginning of the month to conduct a ship training with the Ukrainian forces.

In September 2020, a similar exercise took place in the Black Sea area with the participation of the ship-and-boat group of the Ukrainian Navy and the US Navy destroyer Roosevelt.

Similar trainings in the Black Sea were conducted earlier.

In May 2019, the PASSEX-type exercises were conducted by the Ukrainian missile boat Priluki and the HMS Echo H87 hydrographic reconnaissance ship of the British Navy.

In the summer of 2018, Ankara sent its minesweeper Anamur and the frigate Fatih to participate in maneuvers of this type.

In addition, the frigate De Ruyter of the Royal Netherlands Navy, the auxiliary vessel Rhein of the German Navy and the minesweeper Lupu Dinescu of the MS of Romania joined the exercises then.

According to experts, the Ukrainian Navy often takes rather nominal participation in joint exercises with NATO.

Over the past decades, the Ukrainian navy has fallen into such decline that it practically does not represent an independent military force.

“The Ukrainian Navy can be classified as a flotilla in terms of the number of ships.

And Ukraine is not capable of conducting serious military operations at sea without NATO's participation, ”explained Aleksey Leonkov.

While being part of the Russian Empire and the USSR, Ukraine was one of the world's largest shipbuilding centers.

But after the proclamation of independence by the republic, the industry began to decline.

Upon secession from the USSR, Ukraine inherited its own navy, but over the past decades, it has not been replenished with new large-tonnage ships.

As a result, Kiev had to turn to the tactics of the so-called mosquito fleet.

The command of the Ukrainian fleet is forced to be content with boats, often it is even about attempts to adapt river boats to sea conditions.

These problems of the Ukrainian Navy do not prevent Kiev from regularly participating in NATO naval exercises, experts say.

Moscow records a significant increase in the military activity of the alliance in the Black Sea region.

At the same time, warships of non-Black Sea countries cannot be permanently in the Black Sea under the terms of the Montreux Convention on the Status of the Bosporus and Dardanelles.

According to the document, the ships of the naval forces of countries that do not have access to the Black Sea have the right to stay in the water area for no longer than 21 days.

Restrictions have been set for the tonnage of such vessels - in total, it should not exceed 30 thousand tons and nine pieces of equipment.

At the same time, among the countries participating in the North Atlantic Alliance there are states that have access to the Black Sea - these are Turkey, Bulgaria and Romania.

According to experts, relying on these countries, as well as Ukraine and Georgia, the NATO leadership expects to form a military "sub-bloc" in the Black Sea region.

“The North Atlantic Alliance has taken a course to expand its presence in the Black Sea region.

This should be helped not only by the current members of the military bloc, but also by applicants for joining it.

We can talk about plans to form a regional “sub-bloc” of the alliance, to which Ukraine is being joined, ”said Sergei Ermakov.

However, this course is not easy for NATO, since there is no complete unity among the regional allies, experts say.

First of all, we are talking about the position of Turkey, which is not ready to join NATO's anti-Russian military course.

“Russia's southern borders are the most significant direction for the alliance.

However, this is where NATO faces a serious identity crisis.

And this does not allow the development of serious programs of an expanded forward military presence.

This situation differs from the northern direction, where the united tough position of the allies in the person of the Baltic states and Poland allows building an anti-Russian foothold.

Therefore, for the time being, the alliance is forced to limit itself to such exercises in the Black Sea, although it conducts them with great persistence, "Ermakov explained.

Alexey Leonkov adheres to a similar point of view.

As the expert noted, since 2018, Ukraine is increasingly participating in joint exercises with NATO.

“The Black Sea is a zone of restriction and denial of access and maneuver for the military of the United States, Great Britain and other Western members of the alliance.

Therefore, the leadership of the military bloc has developed a concept according to which Bulgaria, Romania, Ukraine and even Moldova, located inside this zone, should weaken this zone from within, ”the expert explained.

Recall that the concept of restricting and denying access and maneuver (anti-access / area denial, or A2 / AD) implies the creation of an increased danger for the location and movement of enemy forces in a certain area, which, as a rule, is achieved by a whole range of weapons.

In the Black Sea region, according to experts, Russia has such opportunities.

“In the event of a hypothetical military conflict between NATO and Russia, the US Black Sea allies must sacrifice all their naval forces in order to weaken Russian positions on the Black Sea.

They must sacrifice their navies so that the US Navy can operate more efficiently.

The Alliance of NATO Regional Partners should play the role of a battering ram to undermine the Black Sea zone.

It is for this that the alliance is increasing the number of joint exercises in the region - the maneuvers should rally the US allies, ”the expert summed up.