The developers of the Russian "Sputnik-V" vaccine against the emerging corona virus (Covid-19) confirmed that they had reached agreements to produce it in four European countries, while the British Prime Minister, Boris Johnson, announced that the AstraZeneca vaccine is safe, and his government is fully confident about its use. In the vaccination campaign, 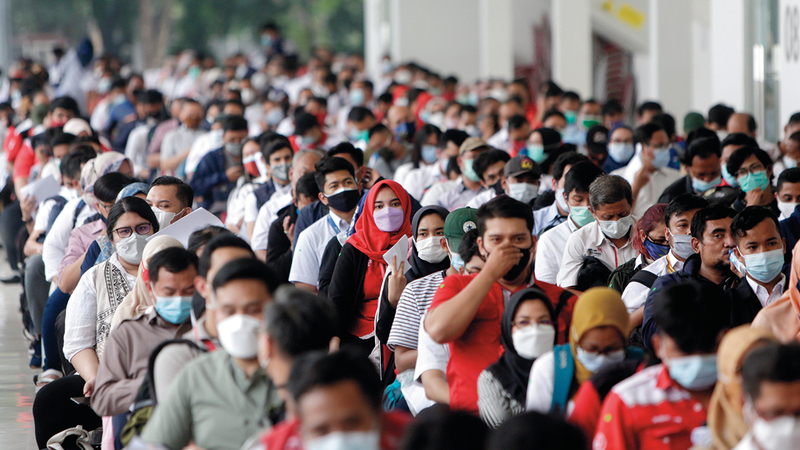 Britain confirms that the "AstraZeneca" vaccine is safe ... and "World Health" calls for the continuation of vaccination campaigns

Dozens in Indonesia queue to receive an anti-Coronavirus vaccine.

The developers of the Russian "Sputnik-V" vaccine against the emerging corona virus (Covid-19) confirmed that they had reached agreements to produce it in four European countries, while the British Prime Minister, Boris Johnson, announced that the AstraZeneca vaccine is safe, and his government is fully confident about its use. In the vaccination campaign, at the same time the World Health Organization confirmed that there is no evidence of any health problems resulting from the injection of the "AstraZeneca" vaccine, calling for the continuation of the vaccination campaigns.

According to the developers of "Sputnik-V", the vaccine has been registered in more than 50 countries, at a time when the European Union Medicines Agency is considering the issue of granting the Russian vaccine an official license.

The head of the Russian Direct Investment Fund, Kirill Dmitriev, said in a statement that his organization "has already reached agreements with companies from Italy, Spain, France and Germany to launch production (Sputnik-V)."

Dmitriev explained that the agreements would open the way to supplying European markets with the "Sputnik-V" vaccine, once the license is issued by the European Medicines Agency.

If licensed, Sputnik-V will be the first non-Western anti-Corona vaccine to obtain permission to use it in the countries of the Union.

The European Medicines Agency began looking into the issue of licensing "Sputnik-V" earlier this month, but several countries in the European Union have already begun distributing it.

Hungary licensed the vaccine in February and began using it, while the Czech Republic and Slovakia requested doses of it, and confirmed that they would not wait for approval by the European Agency.

Russia registered the "Sputnik-V" vaccine last August, and the leading medical journal "The Lancet" published results showing that the vaccine is safe, and that its effectiveness rate is more than 90%.

Yesterday, the Russian Investment Fund stated that 3.5 million people in Russia had received two doses of the "Sputnik-V" vaccine.

In addition, the World Health Organization announced that there is no evidence of any health problems resulting from the injection of the AstraZeneca vaccine against "Corona", stressing that it is important to continue the vaccination campaigns so that lives can be saved and severe illnesses prevented from the virus.

For his part, British Prime Minister Boris Johnson said that the AstraZeneca vaccine is safe, and his government is fully confident about using it in the vaccination campaign.

In response to a question whether he can reassure people about the safety of the vaccine, he said: "Yes, I can."

New York, the city most affected by the Coronavirus in the United States, organized a moving tribute to 30,258 of its residents who died as a result of "Covid-19".

After asking for a minute of silence to honor the victims, Mayor Bill de Blasio said in a live virtual ceremony: "We have lost more people from New York than we lost in the events of World War II, the Vietnam War, Hurricane Sandy, and the events of September 11 combined."

“Every family has been affected,” he added.

There is pain that many families suffer, severe pain. ”De Blasio spoke in particular of the“ heroes ”of the health sector, who“ saved lives sometimes at their expense ”.

In Germany, the Society of Intensive Care Physicians called on the German government to immediately return to strict measures to contain the third wave of "Covid-19", after the authorities alleviated them.

"Based on the data available to us and due to the spread of the British mutated virus, we strongly call for a return to lockdown now to curb a strong third wave," said the scientific director of the German Public Radio Association.

The Corona virus has caused the death of two million 654 thousand and 89 people in the world since the outbreak of the epidemic until yesterday, according to a census conducted by Agence France-Presse based on official sources, and it has been confirmed that more than 119 million 783 thousand and 950 people have been infected with the virus since its emergence, and the vast majority have recovered.

Millions of people in Russia have received two doses of the Sputnik-V vaccine.

Yesterday, the Pakistani authorities imposed closures in the hot spots where Corona virus infections are spreading in densely populated cities, at a time when the country is fighting a third wave of outbreaks.

A spokesman for the Pakistani Ministry of Health, Sajid Shah, said that closures have been imposed in at least seven major cities, in Punjab province in the center of the country and the capital, Islamabad, and that there are restrictions on the movement of citizens, a ban on indoor gatherings, and an early closure of parks. And markets, and the closure of educational institutions for a period of two weeks.

Schools were closed twice in the past year and then reopened.

For her part, Punjab Provincial Health Minister Yasmine Rasheed told the media that "the new strain of Corona virus that was discovered in Britain is responsible for the rapid increase in the number of infections."

As of yesterday, Pakistan announced the registration of 607,453 cases of coronavirus, and 13,537 related deaths.