"Strikes will be delivered precisely": what advantages can the Russian unmanned complex "Grom" get

The arsenal of the heavy Russian drone "Thunder" will include small-sized kamikaze drones and reconnaissance UAVs. This was told by a representative of the "Kronstadt" group, which is developing these devices. Thanks to them, "Thunder" will be able to perform tasks to detect and destroy ground targets. In addition, one of the tasks of the drone will be to break through enemy air defense systems in cooperation with fighters. According to experts, the designers of "Kronstadt" must solve a lot of complex problems. At the same time, the competence accumulated by the company on other projects makes it possible to predict the successful completion of work on "Grom", analysts are sure. 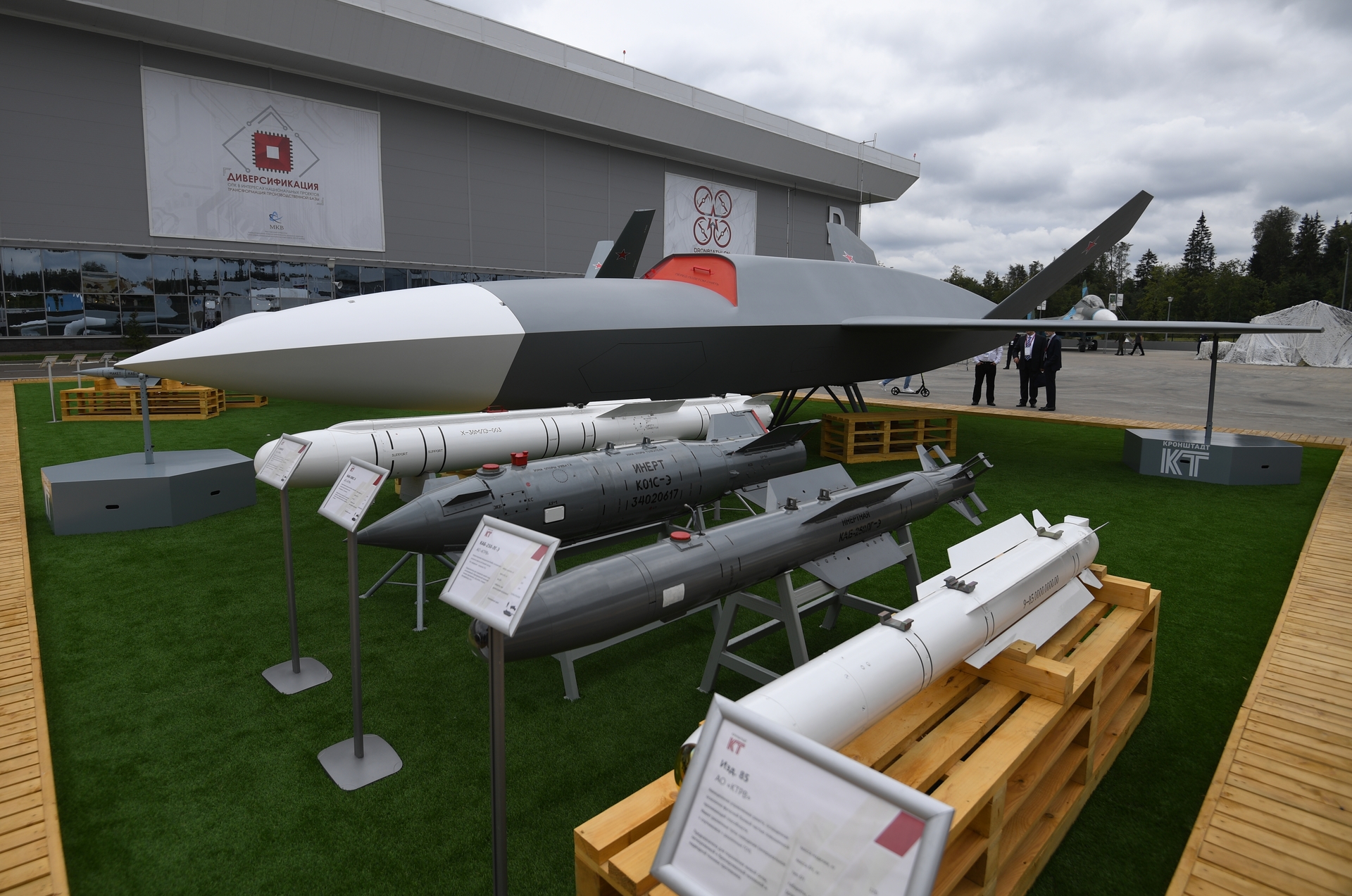 The promising heavy Russian unmanned complex "Thunder" will be able to control a swarm of 10 small-sized drones "Molniya".

This was reported by the TASS agency with reference to a representative of the Kronstadt Group (St. Petersburg), which is developing these devices.

Small-sized UAVs will be made in reconnaissance performance and in shock modification in the version of the so-called loitering ammunition (kamikaze drones).

It is expected that the "Lightning" will be able to constantly interact with each other and directly with the "Thunder".

“Lightning has a constant data exchange between the UAVs.

It is possible to change tasks for each member of the pack.

At the same time, thanks to artificial intelligence, the task is carried out by a group without constant communication with the carrier aircraft, "said a company representative.

The Russian military is closely following the developments of the "Kronstadt".

They examined samples of UAVs of the "Pacer" family, the "Helios-RLD" radar surveillance apparatus and the "Thunder" complex.

During the meeting, the leadership of the military department and representatives of Kronstadt discussed the prospects for the development of domestic unmanned aircraft and measures to increase the rate of equipping the army with such devices.

"Should massively enter service with the Aerospace Forces"

The Thunder model was first presented in August last year at the Army-2020 international military-technical forum.

In an interview with RT on the sidelines of the exhibition, Vladimir Voronov, director of the Kronstadt Center for Advanced Studies, said that the brainchild of the company is intended to perform reconnaissance and strike missions with the possibility of breaking through the enemy's air defenses.

“We have an understanding that in the event of an intense military conflict, a drone must be able to penetrate the enemy's air defense.

To do this, he will need high speed and radar stealth.

) will be able to operate in the first attacking echelon of the strike aviation group in cooperation with manned complexes, "Voronov explained.

In particular, in the theater of operations, Thunder will interact with the Su-35 heavy fighter and the fifth-generation Su-57 combat aircraft.

As the general designer of Kronshtadt Nikolai Dolzhenkov said in a comment to RIA Novosti in August 2020, "today the Ministry of Defense has an understanding that drones of this type should en masse enter service with the Aerospace Forces."

The company expects that the UAV will be able to lift up to 2 tons of ammunition into the air to a height of 12 km.

The drone is planned to be manufactured using stealth technology, which provides for streamlined geometry of all structural elements and broad integration of radio-absorbing materials.

“We analyzed world trends and the situation in our country and came to the conclusion that there is a niche for such an apparatus in our troops,” said Vladimir Voronov.

The company is considering the option of using the power plant of the Yak-130 combat trainer as an engine.

At present, the Russian car flies on the AI-222-25 double-circuit turbojet unit, which is produced by the Moscow-based production enterprise Salyut.

In addition, the domestic industry is creating an analogue called SM-100 with a maximum thrust of up to 3000 kgf (kilogram-force).

Kronstadt is confident that the Thunder project will be implemented thanks to the scientific and technological groundwork obtained during the development work on the Orion long-duration medium-altitude unmanned complex.

According to experts, the emergence of this UAV allowed Russia to join the elite club of the MALE (Medium-altitude long-endurance) class drones.

The UAV can stay in the air for over 24 hours.

Orion's onboard equipment and weapons allow for aerial reconnaissance, patrolling, topographic surveying of the area, determining the coordinates of ground and surface objects, and also delivering strikes.

The brainchild of "Kronstadt" received the baptism of fire in the Syrian operation.

In the Arab Republic, one of the Orions made 20 reconnaissance missions and 17 sorties with the use of weapons.

“It is extremely important that Orion and a number of other UAVs were tested in Syria, that is, in real combat conditions.

This is an invaluable experience that provides a lot of food for thought for the military and developers.

It is the combat use that makes it possible to outline adequate directions for the further development of unmanned aviation, "Eduard Baghdasaryan, expert of the working group of the Aeronet national technology initiative, explained in a conversation with RT.

According to experts, "Thunder" will become a multifunctional unmanned complex capable of performing long-term reconnaissance missions, taking part in local conflicts and in air strikes against an enemy armed with anti-aircraft missile systems and electronic warfare (EW).

“Thunder will have great advantages with loitering ammunition, which is a very effective weapon.

Hits on each target will be targeted.

The experience of modern hostilities suggests that the targets of firefighters are tanks, armored vehicles, fortifications and enemy infantry, "Honored Pilot of the Russian Federation, Major General Vladimir Popov, said in a commentary on RT.

At the same time, a flock of drones, according to the expert, will be used to destroy clusters of enemy armored vehicles.

In addition, Popov is confident that "Thunder" will become a carrier of equipment capable of establishing radio-electronic interference.

Thus, he will be able to protect the small-sized drones "Lightning" from the attacks of enemy air defense systems.

“The concept of using such complexes is that one of the leading large drones takes control of a group of UAVs and at the same time provides protection to small vehicles walking nearby with the help of electronic countermeasures,” says Popov.

In addition to kamikaze drones, Thunder will be able to use the Kh-38 family of supersonic universal short-range modular missiles to strike ground targets.

These ammunition is designed to destroy vulnerable targets at a distance of 3 to 70 km.

The missiles are equipped with a 250 kg warhead of a high-explosive or penetrating type.

High accuracy of destruction with this weapon is provided by thermal imaging and semi-active laser guidance systems.

In this case, the flight speed of the ammunition itself can exceed two Mach numbers.

Also in the arsenal of "Thunder" will include guided bombs KAB-250 and KAB-500, designed to destroy a wide range of targets, including infrastructure facilities of the enemy.

As Eduard Baghdasaryan expects, "Thunder" will embody the best practices of the "Kronstadt" designers.

According to him, the company's employees are well aware of the latest trends in the development of unmanned technologies.

“The biggest challenge is, of course, managing the drone swarm.

These technologies are now under active development in all leading countries of the world.

Therefore, the creation of "Thunder" will definitely be a serious progress for Russia, "summed up Baghdasaryan.