With a hat-trick, Ronaldo drags Juventus to Cagliari

It ends 3-1. The Portuguese champion closes the practice in just over half an hour, rising to 23 in the top scorers. Third Bianconeri close to Milan. Little reaction from the rossoblùs who shorten with Simeone, but never question the result 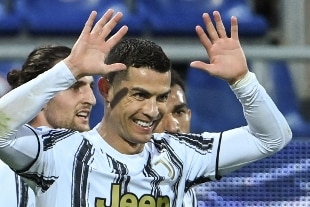 Cristiano Ronaldo is unleashed and Cagliari goes straight to the bottom.

At the 'Sardegna Arena' Juventus passes 3-1, dragged by its leader, increasingly top scorer in Serie A. Pirlo's team third at 55 points, with Milan's second place in the crosshairs.

Rossoblù Sardinians always fourth last at 22. Thus the match at 18 on Sunday of the 27th day of the championship, eighth return.

In his 3-5-2, Semplici in attack relies on João Pedro and Simeone.

Pirlo with the 4-4-2: in defense Chiellini is seen as central with de Ligt, Morata and Cristiano Ronaldo are the tips.

Balance broken after just 10 'by a mighty shot by Ronaldo from a corner by Cuadrado.

At 21 'Morata wastes by enhancing the reflection of Cragno.

But the bianconero doubling is in the air: on 24 'the rossoblù goalkeeper lands CR7 in the area, from the spot the Portuguese himself strikes Cragno with a powerful and angled conclusion (25').

At 32 'Ronaldo exaggerates and signs the hat-trick with a precision shot.

In the second half Juve lowers the pace and controls the game.

Cagliari is seen with a shot from distance by Marin that Szczesny raises over the crossbar (57 ').

At 61 'the home rossoblù scored with Simeone, good at putting in a cross from Zappa from the right.

The whirlwind of substitutions further slows down the pace of a match that has nothing more to say.

At 85 'Pereiro (from 80' for Rugani in Cagliari) touches the post with a low shot.

In the recovery, Cragno denies the poker to CR7.