With the pair of goal Lukaku-Lautaro the Nerazzurri go to +9 on Milan. I collapse grenade: the momentary equal of Sanabria is not needed. After the brilliant success in the Europa League against Shakhtar, the Giallorossi are off at the 'Tardini': Mihaila and Hernani decide 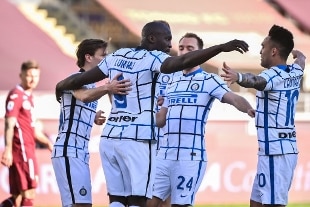 March 14, 2021With the eighth victory in a row, Inter flies to +9 on Milan second: the escape continues.

At the Olimpico - “Grande Torino” grenade beaten 2-1 with some suffering, but the championships are won just like that.

For Nicola's team, always third from last place with 20 points and an advantage over Parma reduced to only one point, thanks to the success of the ducals (who return to savor the victory after more than three months) over Roma: at the Giallorossi 'Tardini' appeared deflated after the beautiful three of a kind at Shakhtar Donetsk in the first leg of the round of 16 of the Europa League;

Rome stops in fifth place at an altitude of 50. These are the results of the matches at 3pm on Sunday of the 27th day of the championship, eighth second leg.

First jolt of the Nerazzurri brand with a header from Lautaro slightly to the side.

Still head of the danger brought by de Vrij on Brozović's corner in the 16 '.

Big chance grenade in the 29th minute, but Lyanco's header from Verdi's free-kick hits the post.

At 33 'it is Verdi who takes the initiative directly, Handanovič covers his post.

Inter's game is not particularly brilliant and Toro defends himself with order.

The rest of the first fraction slips away with no other emotions.

A header from Škriniar opened hostilities in the second half.

Linetty for Baselli nel Toro in the 49th minute.

At 56 'Conte inserts Eriksen for Gagliardini and Young for Perišić.

At 61 'the turning point: Izzo enters late on Lautaro in the grenade area, for Valeri it is a penalty that Lukaku (19th center) transforms by sending Sirigu to one side and the ball to the other (62').

Inter immediately had the opportunity to double but the Torino goalkeeper showed great reflexes on Hakimi's jab.

At 67 'Nicola shakes his team with Zaza for Verdi and Ansaldi for Murru.

At 70 'a scrum on Mandragora's corner was resolved by a touch from Sanabria for the goal of the grenade equalizer, Nerazzurri protests for a clash between Bremer and Barella.

The intensity of the race increases.

At 81 'Conte plays the Sanchez card in place of Brozović.

And the Chilean in the 85th minute packs the assist for Lautaro's gore, who scores his 14th goal.

For Nicola a move of despair: Belotti for Sanabria and Gojak for Vojvoda (88 ').

The result does not change.

On the bench of the ducals Tarozzi in place of the suspended D'Aversa;

He directs Piccinini of Forlì.

Advantage of the hosts in the 9 'with a left-handed of first intention from Mihaila on an assist from Man. In the 27' directly on a free kick Pellegrini calls Sepe to be rejected with his fists.

The reaction of Rome is not effective enough, however, and the ducals do not allow themselves to be crushed in their half.

At the start of the second half, Pau Lopez denied the goal to Man. In the 51st minute El Shaarawy sent out the ball stolen by Džeko shortly after.

But Parma's doubling arrives: in the 53rd minute he provokes a penalty on Pellè after a lost ball by Mancini, from the spot Hernani displaces the Roma goalkeeper (55 ').

At 61 'Zirkzee for Pellè in Parma.

At 72 'it was Grassi's turn for Hernani among the hosts.

At 77 'great flight by Sepe on Perez's shooting.

Fonseca inserts Diawara and Borja Mayoral in place of Villar and Pellegrini.

At 82 'Tarozzi calls Conti and Mihaila to insert Laurini and Karamoh.

Roma ran out of petrol and Parma returned to success.