No passenger flights in one year

The corona pandemic has been tough on the aviation industry. Since March last year, all passenger flights have been canceled at Jönköping Airport. - When it comes to cargo flights, the airport has been running just as usual, says marketing manager Henrik Älverdal. 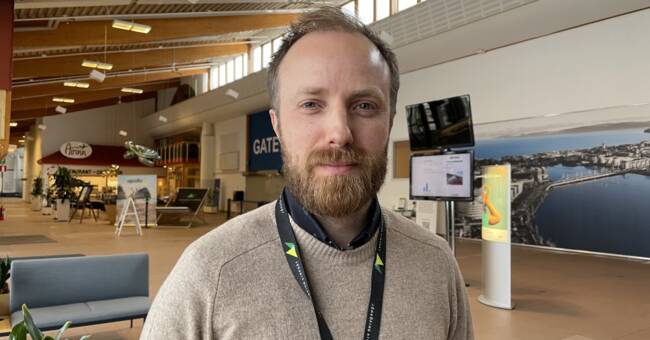 Last year, just over twelve thousand people traveled to and from Jönköping Airport.

- If you just look at the numbers, it does not feel fun, but there is a natural explanation for it, says Henrik Älverdal.

The TaxFree shop has been closed since March last year and five employees have been allowed to leave.

And to cope with the situation, the airport has had to change.

This mainly applies to changes in work tasks and schedules.

For example, staff now work more at night, in order to prioritize cargo flights that run at night.

But it may also have taken some extra effort on the staff to actually be allowed to work at night, says Henrik Älverdal.

While all charter flights and domestic flights have been canceled, Jönköping Airport has continued its operations with cargo flights.

During the pandemic, the airport also fulfilled a socially important function.

We have continued to keep the airport open.

Not least to be able to receive socially beneficial traffic such as ambulance flights, police and military transport, organ transports and such things, says Henrik Älverdal.

According to Henrik, there has also been a need to transport corona patients to other regions, and there Jönköping Airport has been a station where, for example, it has been possible to load and unload from a flight to an ambulance.

And since December last year, the airport has shipped corona tests to Germany in order to increase test capacity in Sweden.

See in the clip above when Mattias Hörberg talks about Jönköping Airport's future.