Corona demo in Dresden: "With brute force and limitless egoism"

Almost 1000 people were checked by the police in Dresden when they marched against the corona policy, and almost 50 criminal offenses were registered. State politicians from the Left, the Greens and the SPD accuse the police of not having the situation under control on Saturday. 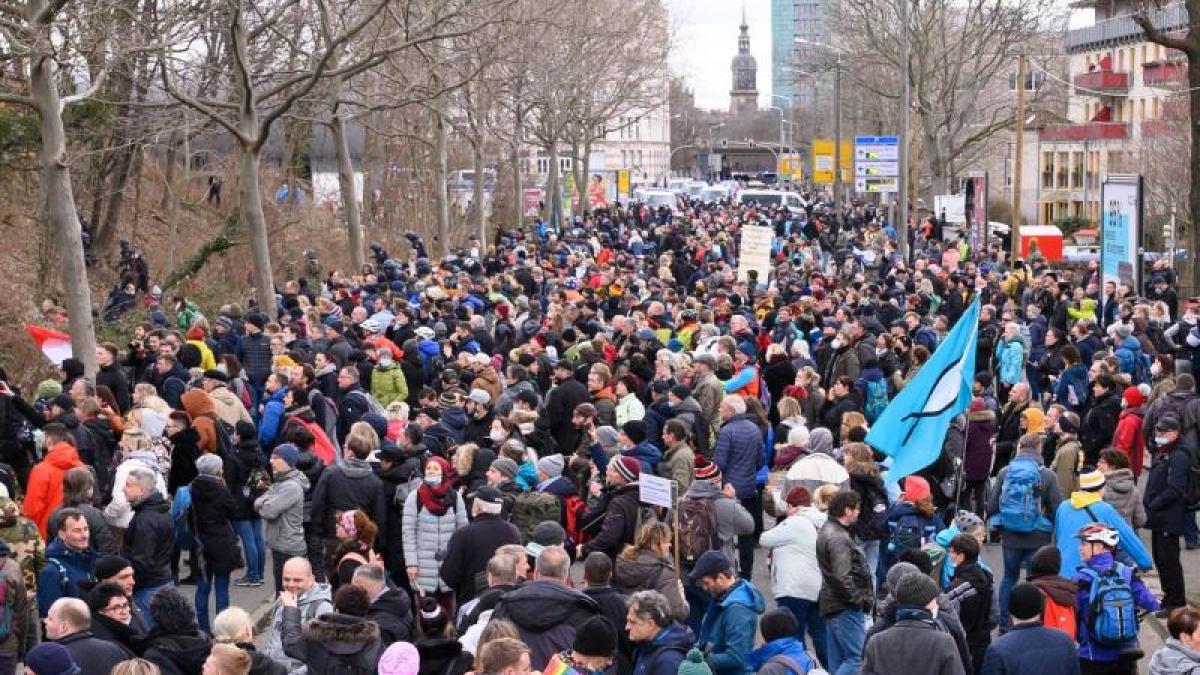 Saxony's Interior Minister Roland Wöller condemned the attacks on police officers and journalists during the demonstration in Dresden on Saturday.

"Despite the ban on assemblies, the corona deniers have shown with brute force and boundless egotism that they are trampling on the rule of law and the health of everyone," said the CDU politician on Sunday.

The criminals would be called to account with "all the severity of the rule of law", said Wöller.

Accordingly, among other things, the organizer of the banned protests was taken into custody - he is being investigated.

Almost 1,000 people were held by the police and identities were established until late in the evening.

In total, the police wrote 943 reports of violations of the Corona regulation.

The officers also recorded 47 crimes, including resistance and attacks against law enforcement officers.

State politicians from the Left, the Greens and the SPD had accused the police of not having the situation under control on Saturday - and are now calling for political reappraisal

“Like every major mission, this is also evaluated critically and thoroughly,” announced Wöller.

We have to wait and see the results.

Rash judgments and blanket criticism of the police are therefore out of place, according to Wöller.

Request for a special session

The criticism of state politics is clear.

"Many corona deniers, so-called lateral thinkers and organized right-wing extremists came to Dresden, although the ban on the reported meetings was confirmed by the Higher Administrative Court," said the domestic political spokesman for the SPD parliamentary group in the Saxon state parliament, Albrecht Pallas.

Nevertheless, around 1000 people managed to walk through the city and repeatedly break police chains.

“Once again, police officers and journalists were brutally attacked from among the lateral thinkers,” said Pallas.

The police were not able to enforce the ban on the gatherings.

The domestic politician therefore supports the left's demand for a special meeting of the home affairs committee.

"The events have to be dealt with politically and in parliament." The committee must question whether the tactics of the assembly authorities and the police were correct, whether the approach was appropriate and whether action should have been taken earlier.

The Greens in the state parliament also spoke out in favor of a special meeting of the interior committee on Sunday.

From the mistakes of the past, the correct conclusions for the deployment concepts for “lateral thinking” demonstrations were obviously not drawn, criticized the member of parliament Valentin Lippmann.

"Once again, the fatal image has emerged that the state has in some cases backed away from violent democracy enemies."

The left in the state parliament had previously announced that they would apply for such a committee on Monday.

"I want to know why the ban on the anti-infection protection assembly was not enforced," said left-wing politician Kerstin Köditz.

She criticized Wöller as a "breakdown minister of the interior" and demanded consequences after the recent events.

On Saturday, thousands of people across Germany took to the streets against the corona restrictions.

There were also demonstrations despite previous bans.

Twelve police officers were injured in Dresden, where a particularly large number of protesters had gathered.

The German Association of Journalists denounced the attacks.

"If the corona frustration is unleashed in violence against reporters as well as against police officers, that cannot be excused," said the DJV federal chairman Frank Überall.