"Communication was lost during the landing approach": what is known about the An-26 plane crash in Kazakhstan

An-26 plane crashed in Kazakhstan near Almaty airport. The Ministry of Emergency Situations of the republic reported that four people died as a result of the disaster. Two more were taken to a local hospital. According to the press service of the airport, the incident, according to preliminary information, occurred at the end of the runway. President of Kazakhstan Kassym-Zhomart Tokayev instructed to establish the reasons for the incident. 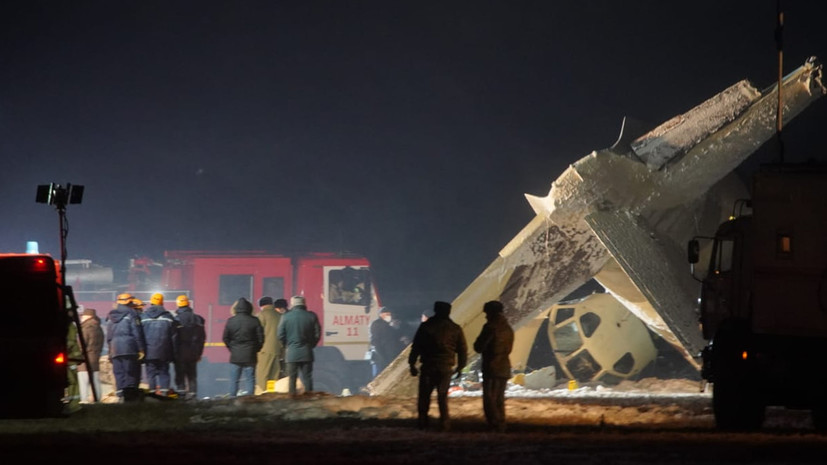 On Saturday, March 13, an An-26 plane crashed near the Almaty airport.

According to the press service of the airport, the incident, according to preliminary information, occurred at the end of the runway.

“At about 17:20, during the landing approach at the Alma-Ata airport, communication with the AN-26 aircraft, following the route Nur-Sultan - Almaty, was lost.

The alarm was immediately declared, the airport emergency services went to the scene, ”the message says.

In turn, the Ministry of Emergency Situations of Kazakhstan announced the death of four people as a result of the incident.

Two more, according to the department, were hospitalized in the city clinical hospital No. 4.

As TASS reported with reference to the press service of the medical institution, the victims are in intensive care.

The Ministry of Emergency Situations clarified that as a result of a hard landing, the plane caught fire, after a while the fire was extinguished.

Firefighters, dog handlers, rescue services and resuscitation teams arrived at the scene of the incident.

The President of Kazakhstan, Kassym-Jomart Tokayev, instructed to establish the causes of the plane crash, and also expressed condolences to the families of the victims and wished recovery to the injured.

"Such incidents should not be repeated," Tokayev said on his Twitter.

Later it became known that the aircraft belonged to the aviation service of the National Security Committee (KNB) of the country, this information was confirmed by the press service of the department.

“On March 13, at 17:22 (14:22 Moscow time), an An-26 aircraft (tail number 02) of the aviation service of the National Security Committee of the Republic of Kazakhstan crashed while landing at the Alma-Ata airport.

There were six crew members on board, of which four were killed and two were hospitalized with serious injuries, "RIA Novosti quotes the committee.

The city administration also clarified that both victims are in extremely serious condition, doctors are fighting for their lives.

A man born in 1987 was diagnosed with an open fracture of the left hip and a closed head injury.

The second victim, born in 1996, was admitted to the hospital with an open craniocerebral injury, fractures of the fingers and burns of the body of II-III degree.

“All personnel have been mobilized, including the chief resuscitator of the city,” the administration added.

The first president of Kazakhstan, Nursultan Nazarbayev, also expressed condolences to the families and friends of the victims.

“With deep sorrow I took the news of the loss of life as a result of the plane crash at the airport in the city of Alma-Ata,” TASS quoted his press service as saying.

After the incident at the airport, several flight delays were announced.

The passenger was recommended to check in advance the information on their flights with the airlines.

Cases of plane crash An-26

On September 25, 2020, an An-26 military aircraft crashed near the city of Chuguev in the Kharkiv region.

As the Minister of Defense of Ukraine Andriy Taran said at the time, the aircraft could catch on the ground with its wing.

In the office of the Prosecutor General of Ukraine, they said that the disaster occurred during the landing approach.

Onboard there were 27 people - crew members and cadets of the Kharkiv National University of the Air Force of the Armed Forces of Ukraine.

26 people died as a result of the accident, one cadet managed to survive.

On the fact of the catastrophe, a criminal case was initiated on "violation of the rules of flights and preparation for them, which entailed a catastrophe and grave consequences."

In December 2018, the transport An-26 of the GomAir airline crashed in the Democratic Republic of the Congo (DRC).

It was reported that bad weather conditions could be the cause of the tragedy.

In March 2018, while landing at the Khmeimim airfield in Syria, the An-26 of the Russian Aerospace Forces crashed.

According to the Ministry of Defense, 27 officers of the Russian army were killed.

The plane performed a scheduled flight from the Quires airbase, located in the suburbs of Aleppo.

As it became known, the plane collided with the ground, not having reached about 500 meters to the runway.

The Ministry of Defense stressed that there was no fire impact on the board.

According to preliminary information, a technical malfunction could become the cause of the plane crash.