Full documentary: 10 moments of the group activities of the two sessions of the General Secretary

Why is the GDP growth rate so set? After seeing the "cute cat photos" brought by the representative, what did the general secretary say? What does the general secretary think about the school district housing problems and the blind expansion of medical education? ...   On March 11, Xinhua News Agency broadcasted a newsletter, which recorded a panoramic view of the lively scenes of General Secre 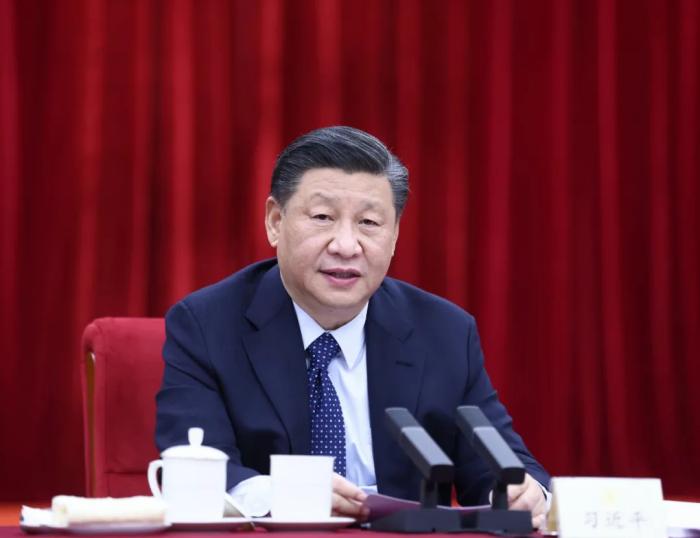 Why is the GDP growth rate so set?

After seeing the "cute cat photos" brought by the representative, what did the general secretary say?

What does the general secretary think about the school district housing problems and the blind expansion of medical education?

On March 11, Xinhua News Agency broadcasted a newsletter, which recorded a panoramic view of the lively scenes of General Secretary Xi Jinping’s cordial exchanges with delegates and members during the two sessions this year, and disclosed many exclusive details.

01 Why is this year's GDP growth rate set?

The draft government work report and planning outline submitted for deliberation, review, and discussion set the GDP growth target in 2021 at 6% or more; the "14th Five-Year Plan" economic growth rate indicator is set to "maintain within a reasonable range, depending on the situation in each year." It is the first time in the history of the five-year plan.

The reason for this is that when he participated in the National Committee of the Chinese People’s Political Consultative Conference, General Secretary Xi Jinping explained: “Last year it was 2.3%. This year we set it to be more than 6%. In fact, it can be higher than this index, but we have room for this. We are more able to focus our energy on high-quality development."

02 After seeing these two photos of "big cute cats", the general secretary said so

"General Secretary, look, this was taken in our hometown recently."

On the afternoon of March 7th, in the East Hall of the Great Hall of the People, the Qinghai delegation deliberated on the scene. Two photos attracted the attention of General Secretary Xi Jinping.

Representative Kong Qingju took out the photo and asked General Secretary Xi Jinping who was sitting opposite to watch it.

"Rare species that were rarely seen in the past are now appearing frequently." Kong Qingju used this as evidence, describing the changes in the ecological environment.

03 "Wuliang Suhai I have given instructions many times"

"To coordinate the management of landscapes, forests, fields, lakes, grasses and sand systems, we need to add the word'sand' here." On the afternoon of March 5, the Inner Mongolia delegation, General Secretary Xi Jinping's new formulation was eye-catching.

Representative Zhang Xiaobing from Bayannaoer introduced the management of the Wuliangsuhai Basin in recent years.

"Wuliang Suhai I have given instructions many times. Now that the governance has achieved obvious results, it will take a long time to contribute." General Secretary Xi Jinping pointed out, "Protecting this place has the problem of managing salinized arable land, as well as the problem of sand control. . How to deal with it? Top-level design must be done."

In the Inner Mongolia delegation, representative Zhou Yizhe, who has been a forestry worker for decades, told the general secretary that with the implementation of the natural forest protection project, his forest area has been recuperating.

According to estimates, the total value of forest and wetland ecosystem services in the forest area in 2018 was 615.974 billion yuan.

General Secretary Xi Jinping said with emotion: “The total ecological value you mentioned is the concept of green GDP, which shows that ecology itself is value. There is not only the value of the forest itself, but also the green lung effect, which can also bring tourism, Forestry Economy, etc."

05 "What is the electric heating of the villagers like?"

On the morning of August 23, 2016, General Secretary Xi Jinping came to Banyan Village, Huzhu Tuzu Autonomous County, Haidong City, Qinghai Province in the morning, visited poor households, and worked with everyone to plan how to get rid of poverty after relocation.

At the scene of the Qinghai delegation’s deliberation, A Shengqing, a representative of the Turkish National People’s Congress from Huzhu County, told General Secretary Xi Jinping that earth-shaking changes have taken place in Banyan Village, and the village’s per capita annual income has increased from 2,600 yuan 5 years ago to 11,419 yuan. .

General Secretary Xi Jinping asked in detail like his relatives: "What is the electric heating kang of the villagers", "How does the embroidery industry help poverty alleviation", "How does the moroccan wine make an industry"...

06 "To expand public hospitals, this one is clear"

Member Hu Yu is from Union Hospital affiliated to Huazhong University of Science and Technology, one of several hospitals in Wuhan that admitted critically ill patients at the beginning of the epidemic.

"In the fight against the epidemic, public hospitals are the mainstay. Once again, to explain the truth, under the national system, one party has difficulties and all parties support, and can concentrate on major tasks." General Secretary Xi Jinping responded, "The next step is to build a medical system. To further consolidate, strengthen, and expand public hospitals, this is clear."

07 Responding to the blind expansion of medical education: "The key is the amount of gold"

Committee member Wang Chen has been fighting on the front line of the epidemic.

As soon as he spoke, General Secretary Xi Jinping recognized him: "I know you, but I haven't heard you speak before in meetings."

Wang Chen pointed out that some colleges and universities are currently setting up medical schools and expanding the scale of enrollment in order to improve their status. In the case of insufficient educational resources, the quality of talent training will inevitably be affected.

"Then have some majors lowered their scores in enrollment?" the general secretary asked.

"Some majors are often in a state of admission with reduced scores, which has caused the quality of these originally very important professionals to deviate from the root. This makes us very worried." Wang Chen said.

"This is still worth studying, now it's a bit anxious." said the general secretary.

"Yes, blindly expanding the number of doctors, if the quality does not improve, it is not a good thing." Wang Chen suggested to prevent the blind expansion of low-quality medical education.

"Yes, the key is the amount of gold, this must be checked." The general secretary said.

08 "This is the issue of education equity"

Member Wang Huan from Shijia Hutong Primary School in Dongcheng District, Beijing, put forward several suggestions on the high-quality development of basic education in the new era and new stage. One of them is to coordinate urban and rural areas and effectively solve the problems of "weak rural areas" and "crowded cities and towns".

"Are you enrolling in this elementary school nearby?" General Secretary Xi Jinping asked after hearing her speech.

"We mainly deal with the nearby students enrolled in the film."

"This is the problem of education equity. It is impossible to solve this problem overnight, even in Beijing. This problem is also very prominent. Therefore, the school district has a high price increase, and it is used in the area of ​​a good school." General Secretary Xi Jinping knows the situation at the grassroots level.

09 In 2010, in Yushu disaster area, I said something to everyone

In the Qinghai delegation, President Xi Jinping remembered a past event——

"I flew directly to Yushu. I went to a village more than 4,000 meters above sea level. The damage there was still serious."

In 2010, a strong earthquake occurred in Yushu, Qinghai, and Comrade Xi Jinping made a special trip to visit and sympathize with the disaster area.

"In the Yushu prefecture office, I said something to the cadres. I said that after the disaster, there must be big changes. With your indomitable spirit, with the full support of the Party Central Committee, and the support of the people of the whole country, everyone will work together to rebuild their homes. There will definitely be a new Yushu in the future."

At the joint meeting of the medical and health circles and the education circles, Lin Zhongqin proposed that it is necessary to more systematically and in-depth teach the vivid and profound "big ideological and political lesson" of fighting the epidemic to the vast number of young students.

"We successfully defeated the epidemic, and took the lead in turning the economy from negative to positive, and withstood severe tests. This is not a one-time luck. We have confidence in our path, theory, system, and culture."

General Secretary Xi Jinping went on to say: “After these years of development, China’s post-70s, post-80s, post-90s, and post-00s can already look at the world and look at the world. This is self-confidence.”

For more information, please see Xinhua News Agency "Forging ahead and opening up a new game-General Secretary Xi Jinping will attend the 2021 National People’s Congress and CPPCC members to discuss the country is a documentary."