Biden's promise: "July 4th will be the day of independence from the virus"

In his first live TV address to the nation, the president ups the ante: he announces that he will order states to make vaccines available to all by May 1st.&nbsp; 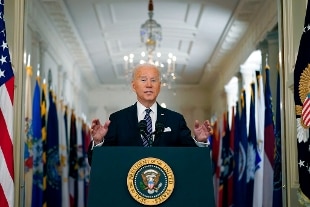 In his first live TV address to the nation, the president raises the stakes: he announces that he will order states to make vaccines available to all by May 1 (regardless of age or health) and warns that the goal of "one hundred million vaccines in 100 days will be not only hit but also exceeded" by his sixtieth day in office, that is, within the next 10 days.

Biden chooses to speak to the nation one year after the classification of Covid-19 as a pandemic.

Twelve months ago, the US was also forced to come to terms with this brutal truth: Donald Trump blocked arrivals from Europe, lockdowns were triggered, all major events were canceled.

The Americans killed by Covid are over half a million and Biden does not forget: "we have all lost something, it was a collective suffering, a collective sacrifice" but "if we remain united, by 4 July there is a good chance of being able to stay together again together with family, friends, to celebrate Independence Day and independence from the virus ".

"America is returning - proclaims the head of the White House - but the fight is not over, it is not the time to let go: beating the virus and returning to normality will depend on national unity", on social distancing measures, as well as than from vaccinations.

Biden presented himself to the Americans on the strength of the 1900 billion Covid aid plan approved and signed.

He called it the "backbone" of the American recovery.

The law does not bear his name but it is a great victory for him.

It will allow him to speed up the immunization campaign.

Biden will maximize the audience of those who can administer the doses (including dentists and veterinarians, among others), will deploy another 4,000 soldiers, will donate millions for the reopening of schools with security protocols and will launch mobile units throughout the nation for vaccinations in the most remote or disadvantaged communities.

In his speech, Biden never mentions Trump but denounces how the United States has had to deal with "denials for days, weeks, then months".

"To all of you who ask when things will return to normal, here is the truth the only way to take back our lives, to restart the economy, is to beat the virus".

The goal of the 4th of July is ambitious but for the "birthday of America" ​​there could not be a better gift.