Cingolani to John Kerry: in Italy 80 billion for green change

In a telephone conversation, the Minister explained to President Biden's envoy how the Italian recovery passes through the green revolution thanks to 37% of the funds of the Next Generation Eu program.&nbsp; 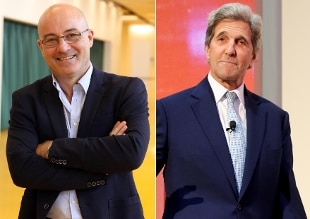 March 11, 2021 80 billion euros will be allocated over 5 years for green conversion.

So explained in a phone call the minister of ecological transition, Roberto Cingolani to the special envoy for the climate of the President of the United States, John Kerry currently in Europe.

An investment that will concern an acceleration of decarbonisation, with reductions that can certainly reach 55%, aiming for 60% of emissions by 2030 ".

So the Italian recovery passes through the green revolution.

As Europe prescribes, 37% of the Next Generation Eu program will have to go to the ecological transition.

Massive investments in new technologies are expected, a strong push towards green and blue hydrogen, a radical transformation of the steel sector in a sustainable sense, but also sustainable mobility and transport, stimulation of self-production of energy in the agricultural sector and increase of the contribution agriculture in the fight against climate change.

A relaunch of reforestation is also envisaged as a tool in the perspective of carbon capture, the launch of an ambitious program for monitoring the country's critical issues with an innovative integrated observation system using satellites, drones and ground sensors.

The Minister also underlined to John Kerry the deep-rooted tradition of environmental protection in Europe and Italy, the basis for further developing collaboration with the United States in order to increase global ambition: "The glocal approach - he underlined - induces to push for awareness of the link between local actions and efforts on the one hand and global benefits on the other, raising the climate and environment to universally recognized common goods, for the benefit of all and above all of future generations, in a planetary logic healthy and just transition ".

Cingolani then confirmed the need to aim for the adoption of shared recommendations for sustainable recovery with a commitment to a certain percentage of green spending, on the model and possibly in the amount of EU Next Generation.

He then confirmed that Italy already has a long-term strategy for climate neutrality by 2050.