Mohammed bin Zayed: Promoting peace and prosperity is a priority for the Emirates

His Highness Sheikh Mohammed bin Zayed Al Nahyan, Crown Prince of Abu Dhabi and Deputy Supreme Commander of the Armed Forces, and Minister of Foreign Affairs of the Friendly Russian Federation, Sergey Lavrov. Abdullah bin Zayed: - “The return of Syria to its surroundings is inevitable, and it is not related to whoever wants or not He wants, the matter is 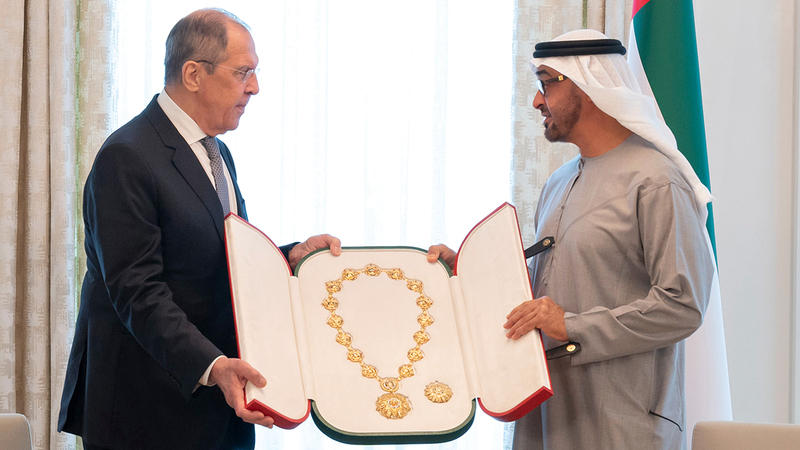 Mohammed bin Zayed: Promoting peace and prosperity is a priority for the Emirates

During the meeting that took place at the Beach Palace in Abu Dhabi, His Highness welcomed Lavrov's visit to the Emirates, and discussed with him the friendship relations, and the strengthening of the level of cooperation, especially in the investment, economic and commercial fields, which witnessed remarkable growth during the past year, in addition to ways to develop various aspects of coordination and work. The commonality between the UAE and Russia, in order to achieve the mutual interests of the two friendly countries and their peoples.

The two sides also discussed developments in the Corona pandemic, the two countries' efforts to confront it, and the importance of expanding joint cooperation in this regard, within the framework of supporting international efforts to contain its health, humanitarian and social repercussions.

His Highness and the Russian Foreign Minister discussed a number of regional and international issues and developments of common interest, and the efforts made to support peace and stability in the region.

His Highness Sheikh Mohammed bin Zayed Al Nahyan valued the bilateral relations with the Russian Federation, stressing the common keenness to strengthen them in all fields.

During the meeting, His Highness presented the vision of the UAE for the next stage, which made the promotion of peace, stability and prosperity among its priorities, stressing the importance of building peace and stability as a method of work for the region, in a way that serves its plans for development and prosperity, and enhances the safety of its people.

During the meeting, His Highness Sheikh Mohammed bin Zayed Al Nahyan handed Sergey Lavrov the "Order of the Union" and Russian Deputy Foreign Minister Mikhail Bogdanov, the "Zayed II Medal" of the first class, which were awarded by His Highness Sheikh Khalifa bin Zayed Al Nahyan, President of the State, In recognition of their efforts, and in honor of their great role in strengthening relations between the United Arab Emirates and Russia, and pushing them forward at various levels.

His Highness wished the Russian Foreign Minister and his deputy continued success, success and distinction in serving their friendly country.

In addition, His Highness Sheikh Abdullah bin Zayed Al Nahyan, Minister of Foreign Affairs and International Cooperation, affirmed that the Emirati-Russian relations are advanced and sustainable, and the two friendly countries share a strong strategic partnership.

His Highness indicated that the friendly Russian Federal Republic has proven to be an effective and reliable partner, especially in the field of combating Corona, expressing his confidence that bilateral relations between the two countries will continue to flourish in all fields.

This came during the joint press conference held by His Highness yesterday, with the Russian Foreign Minister, within the framework of Lavrov's official visit to the country.

His Highness affirmed that the UAE considers its partnership with Russia a strong strategic partnership, based on a history of common interests.

He said, "My country sees Russia as an important and essential partner, and in this regard, the signing of the strategic partnership between the two countries in 2018 is a significant step that has contributed to strengthening our bilateral relations."

His Highness indicated that our world today is witnessing many challenges and crises, including Coronavirus, in addition to the scourge of extremism and the spread of hatred and violence, whose unfortunate repercussions our world faces, and we must work together to confront them.

His Highness added: “Our bilateral relationship continued to develop and prosper in all fields, and in this context, my country is extremely satisfied with the increasing volume of economic exchange. In 2019, non-oil bilateral trade was estimated at $ 3.7 billion, a growth rate of 8% compared to 2018.” .

His Highness said: “Friendly Russia has proven to be an effective and reliable partner, especially in the field of combating (Corona), and today we continue to reap the fruits of our close cooperation, and on January 26 of this year, a pilot partnership between the UAE University and Gamalia Federal Institute for Epidemiology and Biology Research was announced. The minute in Russia is what strengthens cooperation between our two countries. ”His Highness affirmed that we seek to serve humanity and create a better and safer future for the world.

His Highness concluded his speech by saying: “We are confident that bilateral relations between our two countries will continue to flourish in all fields, despite all the challenges the world faces. Today, my country welcomes the Russian Federation as a reliable partner and friend.”

For his part, Lavrov stressed the importance of the UAE-Russian strategic partnership, pointing to keenness to strengthen efforts to develop cooperation and work on new joint projects between the two countries.

He said: “Since the visit of His Excellency President Vladimir Putin to the UAE in 2019, we have been working to strengthen our partnership, and there is an increase in trade exchange between the two countries by 80%, and we are working dynamically to promote the continuous increase in the volume of trade exchange, and we have joint plans for Future projects in several sectors, such as the banking, health, water, electricity and agricultural sectors.

He pointed out that there is fruitful participation from the Russian side in many international events organized by the UAE, such as the Gulfood Dubai exhibition.

He stressed that Russia is looking forward to its participation in Expo 2020 Dubai, and to strengthening its cooperation with the UAE within the framework of this global exhibition.

And he indicated that, during his visit to the UAE, the talks touched on the situation in the Middle East region, and a number of regional matters, such as Yemen, Syria and Libya, in addition to the Abrahamic Peace Agreement between the UAE and the State of Israel, stressing that Russia welcomes the peace treaties signed between the countries of the region. And the State of Israel, and also looks forward to contributing to direct Palestinian-Israeli dialogue.

His Highness Sheikh Abdullah bin Zayed Al Nahyan, in response to a number of questions asked by representatives of the Emirati and Russian media, which focused on the continuous growth in the Emirati-Russian relations and the Syrian issue, stressed the need for cooperation and regional work.

His Highness said, "The beginning of the journey of Syria's return to its surroundings is an inevitable matter, and the matter is not related to whoever wants or does not want it. The issue is a matter of public interest ... the interest of Syria, and the interest of the region."

His Highness added, "There are (disturbances) between the various parties, but it is only possible to work on the return of Syria to its regional surroundings, and to discuss the important roles in which Syria returns to the Arab League, which requires efforts from the Syrian side, as well as from our colleagues in the Arab League." .

His Highness said: “I think that the biggest challenge facing coordination and joint work with Syria is (Caesar’s law), so there must be areas that open the door for joint work with Syria for all of us, and keeping the Caesar Act as it is today makes the matter very difficult, not for us. As countries, but also for the private sector, and I think that this should be the dialogue in which we are talking clearly with our friends in the United States of America ».

Sergey Lavrov stressed that the Emirati-Russian relations every year become deeper and comprehensive, stressing that the tourism sector is rich and witnessing continuous growth between the two countries, expressing his confidence in the continued growth of the Emirati-Russian relations in all fields, in light of the support and patronage of the leaderships of the two friendly countries.