On Tuesday, the first sod was taken on the floorball association Växjö Viper's giant building in the Arenastad area in Växjö. 19 floors and over 150 apartments will be ready in 2023. A building that will help the club to its first Swedish Championship gold. 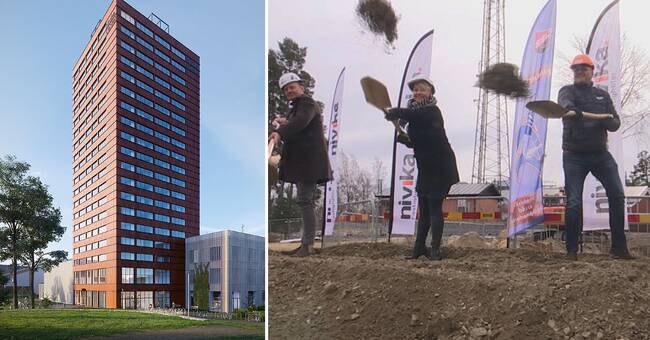 The project is a collaboration between Nivika Fastigheter AB and Växjö Vipers and is about an extension and rebuilding of the association's facility Fortnox Arena.

A project that according to the club will generate such a large financial contribution so that the association can now become a power factor in floorball in the country.

- Nivika has bought the entire arena.

We do not go out with the exact figure, but it is a real penny, says Åke Axelsson who is chairman of Växjö Vipers.

Nivika Center will cover a total of 9,000 square meters and will include a new office and a restaurant.

At the same time, 157 rental apartments will be built on 19 floors.

A high-rise building that will be one of Växjö's tallest buildings with apartments intended for young people.

Nivika Center will also be a new so-called signature building in Växjö, which to some extent reshapes Växjö's cityscape.

A concept that is welcomed by Anna Tenje (M) who is the chairman of the municipal board in Växjö.

- Housing for young people is something we lack in Växjö.

Especially if you want to move here to work and not study, she says.

But this is a new building.

Is there not a risk that it will be too expensive rents for young people?

- But here the contractors have a desire to build a little cheaper so that it will suit young people.

I think they live up to that, says Anna Tenje (M).

The construction, which has a budget of approximately SEK 230 million, is planned to be completed during the first quarter of 2023. Växjö Viper's plan is to take the first Swedish Championship gold within three years - a gold that they so narrowly missed with the final loss against Falun 2017.

- We have been close before.

But in our current three-year budget, we plan to go up with the ladies in the highest series and take the Swedish Championship gold with the men, says Åke Axelsson.