Chinanews.com, Beijing, March 9th. On the afternoon of the 8th, the fourth session of the 13th National People's Congress held the second plenary meeting. The appearance of the "Two Highs" report attracted public attention.   Sun Xiaoguo, Guo Wensi and others "serving sentences on paper", "spicy pen Xiaoqiu" slander heroes, and the murder of passion fruit girls... These landmark cases that have 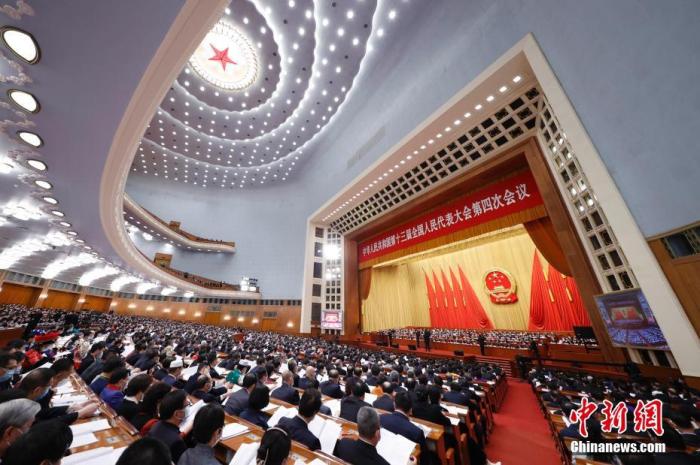 Chinanews.com, Beijing, March 9th. On the afternoon of the 8th, the fourth session of the 13th National People's Congress held the second plenary meeting. The appearance of the "Two Highs" report attracted public attention.

Sun Xiaoguo, Guo Wensi and others "serving sentences on paper", "spicy pen Xiaoqiu" slander heroes, and the murder of passion fruit girls... These landmark cases that have been reported and named have recorded the progress of the rule of law in China.

On March 8, the fourth session of the 13th National People's Congress held its second plenary session in the Great Hall of the People in Beijing.

[Punishing underworld criminals in accordance with the law]

On December 23, 2019, the Yunnan Higher Court publicly sentenced Sun Xiaoguo in the 1997 retrial case of rape, forced insult to women, intentional injury, and provocation of quarrels, and decided to uphold the Kunming Intermediate Court’s first instance against Sun Xiaoguo in February 1998. The sentence of death penalty was combined with the final judgment of 25 years in prison for organizing and leading a gang after he was released from prison. It was decided to execute the death sentence on Sun Xiaoguo, deprive him of political rights for life, and confiscated all personal property.

For more than 20 years, from the death penalty to the death sentence with a reprieve, from commutation and release to crime-related crimes and then arrested, the Sun Xiaoguo case affected national public opinion in 2019.

[Rethinking on the "Paper Sentence" Case]

The procuratorial supervision in the Sun Xiaoguo, Guo Wensi, Batumeng, and the "paper-based sentence" cases, which are widely concerned by the society, is a mere formality. We deeply reflect on the outstanding problems in the execution of penalties. Correction and non-reporting are malfeasance.

On January 29 this year, Beijing No. 2 Intermediate People's Court sentenced the defendant Guo Wensi to death for the crime of intentional injury, depriving him of political rights for life.

The case of Sui Jianjun and others concerning bribery and malpractice for favoritism, and the bribery case of Guo Wanpu and others related to the "Guo Wensi commutation case" were also sentenced on the same day.

Previously, Guo Wensi was sentenced to life imprisonment for the crime of intentional homicide, and was later released after 9 commutations, and committed another homicide after six months of release.

An investigation by the Beijing Municipal Commission for Discipline Inspection found that many people in the Beijing prison system, procuratorate, and courts helped Guo Wensi to reduce his sentence in violation of regulations. 9 party members and public officials were expelled from the party and from public office (retirement benefits).

On March 8, the fourth session of the 13th National People's Congress held its second plenary session in the Great Hall of the People in Beijing.

The settlement of 22,000 cases of corruption, bribery, and dereliction of duty, and 26,000 cases, sentenced Zhao Zhengyong to death with a suspended sentence and life imprisonment, and sentenced and executed death sentence for Lai Xiaomin, demonstrating the strong determination of the Party Central Committee to punish corruption.

Zhao Zhengyong used to serve as Secretary of the Shaanxi Provincial Party Committee and Deputy Chairman of the Internal and Judicial Committee of the National People's Congress.

On July 31, 2020, Tianjin No. 1 Intermediate People’s Court sentenced Zhao Zhengyong to the death penalty for accepting bribes, suspended for two years, deprived of political rights for life, and confiscated all personal property, and the death sentence was suspended for two years after the expiry of the law. After the sentence is commuted to life imprisonment, life imprisonment, no commutation or parole shall be allowed.

The trial found that from 2003 to 2018, Zhao Zhengyong used the convenience of his position to seek benefits for relevant units and individuals in project contracting, business operation, job promotion, job transfer and other matters, and he illegally accepted it alone or in cooperation with his wife and others. The property given by others amounts to more than 717 million yuan.

Among them, more than 290 million yuan has not been actually obtained, which is an attempted crime.

On January 21, the Tianjin Higher People's Court publicly pronounced the second instance of the bribery, corruption, and bigamy case of Lai Xiaomin, the former party secretary and chairman of China Huarong Asset Management Co., Ltd., and ruled that the appeal was rejected and the original verdict was upheld.

Lai Xiaomin used to be Secretary of the Party Committee and Chairman of China Huarong Asset Management Co., Ltd.

The Second Intermediate People's Court of Tianjin issued a verdict of the first instance on January 5, 2021, and found that Lai Xiaomin's bribery property amounted to more than 1.788 billion yuan and embezzled more than 25.13 million yuan. Lai Xiaomin had a spouse and lived with others in the name of husband and wife for a long time.

With the approval of the Supreme People's Court, on the morning of January 29, 2021, Tianjin No. 2 Intermediate People's Court executed Lai Xiaomin in accordance with legal procedures.


[The heroes cannot be slandered, and the law cannot be provoked]

The Internet Big V "Spicy Pen Xiaoqiu" maliciously vilified and degraded the heroes defending the country and defending the border. The Jiangsu procuratorial organs quickly intervened and applied the Criminal Law Amendment (11) that came into effect on March 1 this year. For the first time, it was suspected of violating the reputation of heroes and martyrs The arrest was approved for the crime of honor, and with the support and cooperation of military procuratorial organs, public interest litigation investigations were carried out.

On February 20, the criminal suspect Qiu Mouming was detained by the public security organs, and the People's Procuratorate of Jianye District, Nanjing City intervened in the investigation according to law.

On February 25, the public security agency submitted a request to the procuratorate to approve the arrest on suspicion of provoking quarrels.

The prosecutors found that the criminal suspect Qiu Mouming used the information network to belittle and ridicule heroes and martyrs, infringe upon the reputation and honor of heroes and martyrs, and had a bad social impact and serious circumstances.

According to the relevant provisions of the Criminal Law, the People's Procuratorate of Jianye District, Nanjing City approved the arrest of the criminal suspect Qiu Mouming on suspicion of infringing on the reputation and honor of heroes and martyrs.

[Never suspect a crime, if there is a mistake, it must be corrected]

On October 24, 1993, two boys surnamed Zhang disappeared in Zhangjia Village, Huangling Township, Jinxian County, Nanchang City, Jiangxi Province. The bodies were found in a reservoir near the village the next day. Zhang Yuhuan, a fellow villager, was identified as a suspect by the police .

On January 26, 1995, the Nanchang Intermediate Court decided that Zhang Yuhuan was guilty of intentional homicide and was sentenced to death with a two-year reprieve.

After that, Zhang Yuhuan appealed and the case was sent back for retrial. He was still sentenced to death, suspended for two years.

Zhang Yuhuan refused to accept the appeal again and was sentenced to dismiss the appeal and uphold the original judgment.

In 2019, the Jiangxi Provincial Higher People's Court made a retrial decision to retrial the case and open the trial on July 9, 2020.

Data map: After the retrial was pronounced, Chen Liyan, the mother of the "Passion Fruit Girl" (first from the right), could not cry.

Severely punish crimes against minors in accordance with the law, and will never tolerate various serious crimes committed against children that challenge the bottom line of the law and social ethics.

The "Passion Fruit Girl Murder Case" was retrial, and Yang Guangyi, who raped and killed a girl, was sentenced and executed according to law.

Case: The murder of a passion fruit girl

On October 4, 2018, 10-year-old Xiao Yanzi was stabbed in the eyes and neck with a knife and raped by Yang Guangyi, a 29-year-old villager from the same village on his way home from selling his own passion fruit.

After the criminal suspect Yang Guangyi was brought back to the case, he confessed to the crime of killing Yang Mouyan.

Yang Guangyi refused to accept and lodged an appeal.

On March 25, 2020, the second instance of the Guangxi High Court changed his sentence to a two-year suspension of death sentence, deprived of political rights for life, and restricted commutation.

This second-instance trial of the brutal rape of a minor to death was reported by the media and aroused high public concern.

Later, the Supreme People's Court reviewed the case and ordered the Guangxi High Court to retry the case.

[Misdemeanor is not innocent, let alone harmless, it can be punished lightly according to law but never indulged]

Misdemeanors are not innocent, let alone harmless. They can be punished lightly in accordance with the law but never indulged.

In response to the frequent occurrence of online infringements and the difficulty of personal rights protection, we caught two typical cases of secretly taking pictures of express delivery women and spreading rumors about their derailment on the Internet, and instructed Zhejiang prosecutors to issue prosecutorial suggestions.

Case: Secretly photographed a courier woman to spread rumors about its derailment

In this case, an unmarried woman in Hangzhou was secretly photographed while picking up the express delivery in the community, and the WeChat chat content of the fabricated "derailed express delivery brother" was spread online, which caused the woman to receive a large number of inquiries and abuse information, which was brought to her. The tremendous mental pressure has also caused serious social adverse effects.

The two rumors were administratively detained by the public security organs. Due to the ineffectiveness of compensation and the negative attitude of apology, the victim filed a criminal private prosecution to the court and was accepted.

Later, based on the recommendations of the Procuratorate, the Yuhang Branch of the Hangzhou Public Security Bureau filed a criminal investigation against the two suspects for defamation.