The allegations of Harry and Meghan

Burst of revelations from Harry and Meghan in the interview with Oprah Winfrey, broadcast on CBS in which the dukes of Sussex explain why they have turned their backs on the royal family. The accusations of racism in the British court 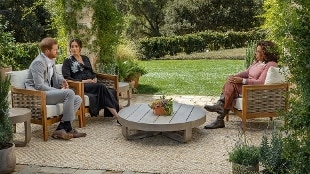 March 08, 2021The interview began with Meghan alone with the talk show queen: both assured that the interview was not paid for.

When Prince Harry also joined the interview, the two announced they were expecting a baby girl, they also said they were married in secret three days before the official ceremony.

Meghan Markle said she was the victim of "an authentic campaign of denigration" within the British royal family and that she felt alone and abandoned.

The Duchess of Sussex argued in the interview that the royals did not want her son Archie to become a prince: "There were concerns and conversations about how dark his skin would be when he was born."

"The rules changed and Archie is not prince", "The idea that the first black member in this family does not have the same title as the other grandchildren ....".

Prince Harry said he was saddened that no one in the Royal Family has spoken out publicly and in support of racism.

Harry said he didn't tell any of their relatives about Meghan's suicidal thoughts because she was ashamed.

"But what was different for me was the race element. Because it wasn't just about her, but what she represented."

And he added that, "for the specific facts around the race", it could be "an opportunity" for the royal family "to show some public support".

Harry revealed that his father, Prince Charles, does not answer his phone calls and that they can only be heard via email: "I'm disappointed because he's been through something like this, he knows what pain feels like," he confided in the interview with Oprah Winfrey. .

"What would Princess Diana think of our decision to leave the royal family? I think she would be very angry and sad about how this all turned out, but also that she would like us to be happy."