Will Meghan attack a member of the royal family by name? Harry's wife refrained from attacks. Nevertheless: The interview with Oprah Winfrey contains a lot of explosive elements. 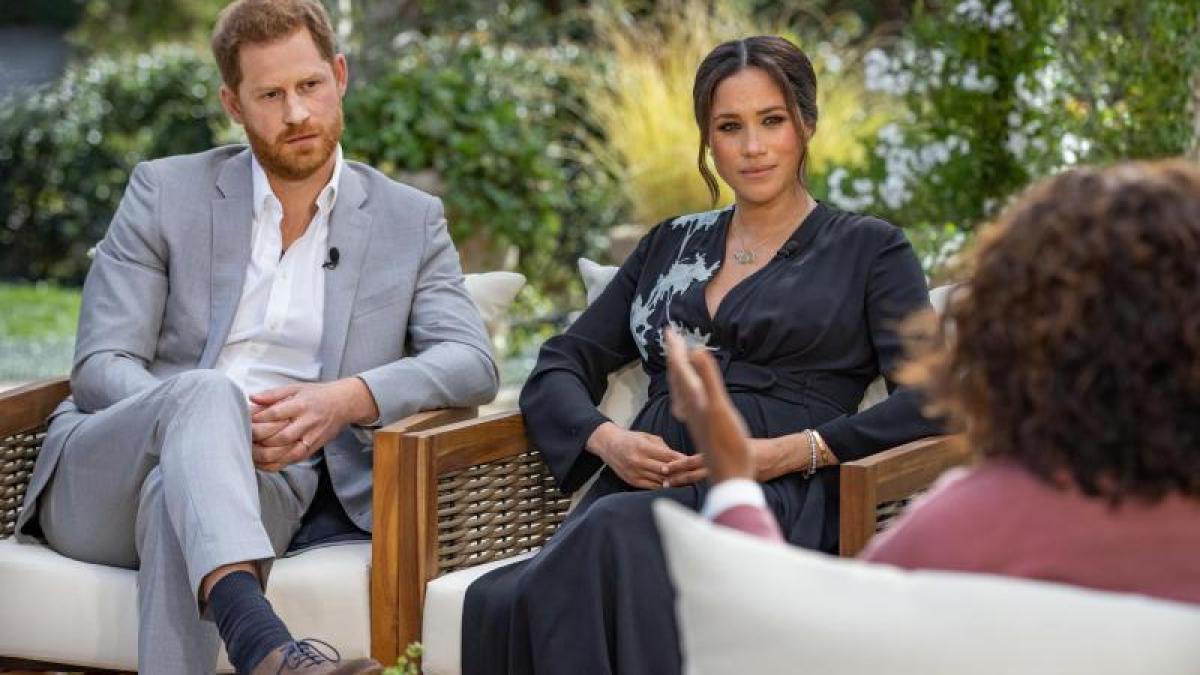 Los Angeles (AP) - In her eagerly awaited interview, Duchess Meghan reported about suicidal thoughts and racism within the royal family.

"I just didn't want to be alive anymore," said Meghan while broadcasting an eagerly awaited interview by the US broadcaster CBS with presenter Oprah Winfrey.

"I thought it would solve the situation for everyone".

At that time, she was also afraid of being alone because she could have harmed herself.

She asked her husband, Prince Harry, and the palace for help.

“I was scared because it was very real.

This wasn't an abstract idea, it was systematic and this wasn't who I am. "

In the conversation with US presenter Oprah Winfrey, Meghan also reported racist behavior during her pregnancy with son Archie.

There have been concerns and discussions about "how dark his skin could be when he is born," Meghan said.

This emerged from conversations between the "family" and her husband Prince Harry.

Meghan did not want to be more precise, however, because this would be "very harmful" for some people.

It is clear, however, that a brown baby would have been a problem for the palace.

The mother of the 39-year-old American is black.

The conversation, broadcast by the broadcaster CBS, is Meghan and Prince Harry's first interview since the couple gave up their royal duties a year ago.

Meghan's supporters had repeatedly accused the media and the royal family of campaigning, in particular against the Duchess.

There were also allegations that the wife of the Queen's grandson Harry was exposed to racism.

The pressure on her during her time in the palace was enormous, says Meghan.

She felt like she was in a golden cage and was condemned to be silent.

"I don't know the institution (monarchy), so we were told to keep quiet."

Clear rules of conduct have been imposed on everyone around her since it was known that she was in a relationship with Harry.

"Even now I can't just go out to dinner with friends," said Meghan. "

She was not prepared for her life as a royal.

"I went in there naively because I grew up with little knowledge of the royal family," said the native American.

"What you know about royals, you know from fairy tales," said Meghan.

"That's why it's easy to have a picture of it that is so far removed from reality."

In the years at court it was difficult: "Perception and reality are two very different things and you are judged by the perception, but live the reality," said Meghan.

Contrary to expectations in the British press, Meghan refrained from personal attacks against the royal family.

The Queen took great care of her, says the Duchess.

She also spoke positively about her sister-in-law, Prince William's wife.

Duchess Kate is a "good person".

However, Kate made her cry.

A few days before the wedding to Prince Harry in 2018, Kate was upset about a flower girl's dress, Meghan said.

“And it made me cry.

And it really hurt my feelings ».

After that, Prince William's wife apologized and gave her flowers, Meghan said.

The Duchess revealed that they had married on a small scale three days before their royal wedding in May 2018.

"Nobody knows, but we called the archbishop," said Meghan.

The 39-year-old and Prince Harry (36) had given up their royal duties around a year ago and moved to Meghan’s home USA with their son Archie, who will be two years old in May.

Meanwhile, the couple is expecting a second child - it will be a girl, as the two reported in the interview.

"Having a boy and a girl, what more could you want?" Said Harry.

The two wanted to leave it with two children, they said.

They were expecting the baby in the summer.