Sanremo 2021, the best moments of a single edition

An anthology, an album of memories, a treasure chest where you can keep precious images and sounds. We have chosen some, add yours 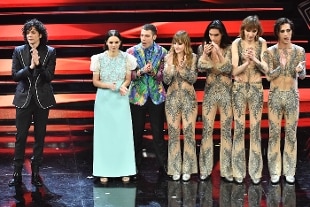 07 March 2021How many things has this Festival been.

In the middle, in fact, many moments to remember.

It was the Empty Armchairs Festival, because the pandemic decided that the public had to stay at home.

It was the Technology Festival, with the scenography and its 7 kilometers of LEDs that redesigned the Ariston theater like a gigantic spaceship.

But also with Vincenzo Mollica's hologram in connection every evening from his historic balcony.

It was the Festival of the two friends Ama and Fiore, because only an iron friendship could hold up the alienating atmosphere of a show without an audience.

It was the Festival of characters, Zlatan Ibrahimovic and Achille Lauro above all, but also of the people, the orchestra, the show business workers.

The Appeals Festival, from the nurse-symbol Alessia Bonari to "Liberate Patrick Zaki".

The Women's Festival (conductors, singers, actresses, sportsmen, journalists, models, super guests, all) and the Youth Festival, on stage and at home, say the audience figures.

It was also the Festival of the courage to live with the disease, from actress Antonella Ferrari to Donato and her dream of dribbling with Ibra.

And again, the Festival of transvestisms and transformations (Lauro, Amadeus and Fiorello, Gazzé, Lo Stato Sociale) and then the Festival, we could say, of "let's look into each other's eyes": the two conductors, the Coma_Cose, the Lista Representative, Fedez and Michielin, Colapesce and Dimartino.

We have chosen some of the moments that impressed us the most.

There is no hierarchy or a common thread, if not that of emotions.

We put them here, all together, to keep them.

Everyone can add or remove what they want.

Let's start from the end.

At the Festival of "it has never happened before"

the rock of Maneskin

It could not have ended better

Gaudiano who sings with his eyes to the sky and dedicates

among the New Proposals to his father who is no longer there.

Don't call them just covers or duets, those of the

were little pearls in honor of the best history of Italian music.

Colapesce and Dimartino who pay homage to

, long away from the scene but present here with an unprecedented fragment of his voice, to remind us that his silence weighs like the absence of the public.

What do the CCCPs and the CSIs have to do with the Sanremo Festival?

We will explain it to

We didn't discover that he was a character as well as a great footballer here, but "

The rules of Zlatan

" will remain one of the best inventions of this Festival.

Many guests have passed by: the blow of pure musical energy, however, by

who recalls Renato Carosone is an anthology.

"I'm an actress, not multiple sclerosis":

Another type of monologue and emotion:

conquers everyone with the story of her life.

Rosario Salerno and Amedeo Squillo singing "We are women".

She goes down the stairs with caution, accompanied by Fiorello.

Then he takes the microphone and they are shivering: the 'standing ovation' for