The Rossoneri respond to Juve and Roma by winning at the 'Bentegodi' with Krunic and Dalot. Draw for strong hearts between Fiorentina and Parma (two goals in the recovery), the Calabrians in the rear stretch the Toro 4-2 and still believe in the miracle 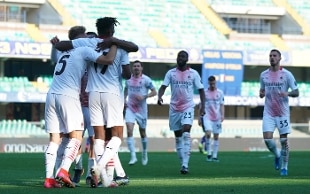 07 March 2021 AC Milan is shaken and passes authority to the 'Bentegodi', a historically difficult field: a disappointing Verona sank 0-2.

With this success, the Devil rises to -3 from leaders Inter (engaged on Monday evening at San Siro against Atalanta) and strengthens second place, keeping Juventus at a distance (to -4, but with one game less) and Rome ( -6).

Many important absences (Ibrahimovic, Rebic, Theo Hernandez, Bennacer, Mandzukic) in Pioli's team who risks in the 9 'on a wrong back pass by Tomori: Lasagna anticipates Donnarumma but fails to direct the ball towards the goal, Romagnoli unravels.

Six minutes later, on a cross from Calabria, Leao off undisturbed but sent over the crossbar from an excellent position.

At 27 'the Rossoneri unlocked her: free kick from the edge and Krunic's right-footed shot that put her under the crossroads (on Silvestri's post, however, not perfect).

Rossoneri doubling at the beginning of the second half (50 '): action started by Saelemaekers, Leao's veil and Dalot's unstoppable jab.

Juric's changes do not shake Hellas, which struggles to build and sting: Dimarco tries with his left-handed and Ceccherini with his head, nothing to do.

Milan no longer sinks, but holds the game in hand without great worries.

Half an hour fairly flat, then back and forth.

Viola forward with the header of Martinez Quarta from corner (28 '), immediate equal of the ducals (30') with the penalty of Kucka (Pulgar arm on Gervinho raid).

Guests still threatening in the 33rd minute with the Ivorian who flies into the open field and ends by crossing with the right, Dragowski responds with his foot.

Before the break, however, Fiorentina riallunga (42 '): on the development of a free kick, Milenkovic resolves in the area but with the serious responsibility of Sepe.

Prandelli, for now, is 'holding on' to the goals of two defenders.

The second half passes without particular occasions until the 72nd minute, the minute in which Parma re-emerges for the second time: Laurini's cross (deflected), Kurtic anticipates Malcuit and stamps.

Everything and more happens in the final race.

The Gialloblù Man is very dangerous with his head (ball out of a whisker), Quarta hits the right post (90 '), a few seconds later on the assist of the English kiss, Mihaila puts in the net of the sensational turnaround without problems.

Which, however, does not materialize, thanks to Iacoponi's own goal in the 94th minute which 'saves' Fiorentina.

The Emilians, penultimate, are missing their last breath a success that would have been of vital importance.

Prandelli's team at an altitude of 26, +6 on the third last place: for salvation, we will have to grit our teeth.

At 23 'chance for Messias (Sirigu opposes) and Brazilian who at 26' provokes the penalty that Simy transforms with his head (touch of the arm Ansaldi).

The grenade reaction is vehement: Cordaz says no to Ansaldi, Lyanco all alone wastes his head badly (high), at 45 'comes the same with the flying deviation of Mandragora on Ansaldi's cue.

Flurry of emotions at the beginning of the second half: Bonazzoli's missile is printed on the crossbar (52 '), Simy scores a brace easily bagging after a Petriccione wood and a rejection by Sirigu on Messias (54'), at 64 'the pole denies the trio in Magallan (aerial shot).

Crotone very close to 3-1 even with Ounas: Lyanco's opposition (73 ') was decisive.

But the appointment is postponed a little (80 '): Reca's blow with the left-handed, Sirigu cannot get there.

The game 'seems' over but Toro is not there: Sanabria strikes Cordaz from distance (84 '), immediately reducing the passive, at 86' the home goalkeeper avoids the 3-3 by deflecting Gojak's attempt on the crossbar.

The match, however, ends badly for the guests, who in the recovery lose Rincon (expelled) and collect the fourth goal, signed by Ounas at the end of a splendid personal action (94 ').

First victory of the new technician Cosmi and Calabresi who, although always bringing up the rear, do not miss the last train available to hope again.

The tormented season of the Bull continues: the ranking remains red alert (third from last position).