The United States recorded encouraging indicators, including a decline in the number of "Covid-19" infections to less than 40 thousand, on Thursday for the first time since October, and a decline in the weekly death rates, while Europe witnesses a strong outbreak of the epidemic again. Walter Stein 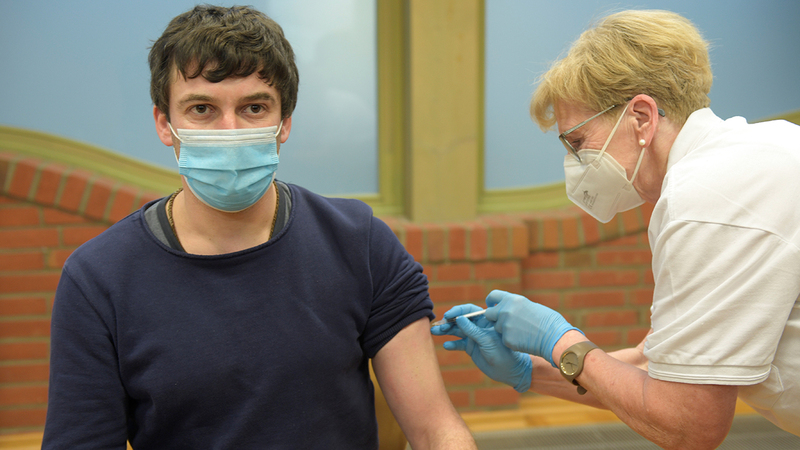 A German warning about the difficulty of controlling the Corona virus

A teacher receives his first dose of the Corona vaccine, amid the spread of the "virus" in Germany.

The United States recorded encouraging indicators, including a decline in the number of "Covid-19" infections to less than 40 thousand, on Thursday for the first time since October, and a decline in the weekly death rates, while Europe witnesses a strong outbreak of the epidemic again.

While the German President, Frank-Walter Steinmeier, said that Corona deaths in Germany take a "shocking dimension" by exceeding 70,000 cases, the head of the German Robert Koch Institute for Disease Control, Lothar Feller, warned of the difficulty of controlling the virus.

After the record level of 300,000 infections within 24 hours in the United States on January 8, the number of infections has returned to the rates before the end-of-year holidays, which witness many movements across the country and lead to an increased spread of the virus.

In another encouraging indicator in America, the country most affected by the pandemic in absolute numbers (more than 520,000 deaths), the weekly death and hospitalization rates have also decreased significantly.

And the vaccination campaign that was launched in December in the United States is enjoying great momentum with the approval of three vaccines: Pfizer-Biontec, Moderna and finally Johnson & Johnson, whose first doses were given on Tuesday.

The number of vaccinated people will soon exceed the number of infections recorded in the country since the start of the pandemic.

But US President Joe Biden called for continued caution and criticized the lifting of measures in some states, a decision key health officials at the federal level considered premature.

In Europe, the number of new infections with the Coronavirus increased by 9% last week, to exceed a million, according to the regional branch of the World Health Organization, which includes about fifty European countries, reaching Central Asia.

He called on the Europeans to "return to the basic (principles)" to combat the virus by using the available tools and accelerating the pace of vaccination.

"We must expand our vaccine portfolio," he said.

For its part, five countries, including Britain, Switzerland and Canada, intend to approve, through an expedited mechanism, the new generation of vaccines against mutated versions of the Coronavirus, according to a recommendation disclosed by a coalition that includes its regulatory agencies.

After France, Germany, Sweden and Denmark gave the green light, Thursday, to use the AstraZeneca-Oxford vaccine for people over the age of 65.

On the other hand, New Zealand announced the lifting of the closure on Auckland, the largest city in the country, yesterday, saying that the outbreak of the Corona virus had been contained.

Prime Minister Gassinda Ardern announced that the lockdown would end on Sunday, a week after it went into effect.

On the other hand, Japan decided yesterday to extend the state of emergency related to the virus in the Tokyo region for a period of two weeks.

In Berlin, German President Frank-Walter Steinmeier commemorated the many people who died in Germany due to the Corona pandemic.

Steinmeier said during his talks with the bereaved, that more than 70 thousand people have already fallen victim to the virus, adding that "this represents a shocking and worrying dimension."

For his part, the head of the German Robert Koch Institute for Disease Control, Lothar Feller, warned of “signs of a change of direction” in the Corona pandemic, which bodes bad news for plans to gradually re-launch public life in light of the spread of a more contagious strain of the virus.

Feller expected, at a press conference in the capital, Berlin, that the virus would become increasingly difficult to control.

Feller was speaking next to Health Minister Jens Young, who also indicated that the number of infected people was stagnant and sometimes rising again.

For its part, the Czech Republic announced, after a long period of hesitation, that it is now accepting offers of assistance from abroad, as the situation worsens regarding the outbreak of the Corona virus.

Yesterday, the Ministry of Health in Prague announced that Germany, Poland and Switzerland have been asked to receive and treat at least 12 patients with "Covid-19" disease.

The ministry said that the reason for the requests is that hospitals are overwhelmed with patients beyond their capacity, and that no longer guarantees normal standards of treatment are met.

Yesterday, the authorities in Tunisia announced to reduce the timing of the night curfew, to start at ten in the evening, instead of eight in the evening, and continue until five in the morning, in light of the stability of the epidemiological situation in the country.

In a press conference, the spokeswoman for the Ministry of Health and the Committee to Combat Coronavirus, Nassaf Bin Alia, announced the abolition of restrictions on movement between states and the lifting of restrictions on some economic activities, but while preserving health protocols and preventive measures.

The Minister of Health, Habib Ammar, said: “With the improvement of health indicators, today we have a clear vision for the tourism sector, and we can also communicate with our partners abroad, so that tourists are aware of the conditions of residence in Tunisia.”

The new decisions include the abolition of the compulsory quarantine of arrivals from abroad, but with a negative corona analysis, whose duration does not exceed 48 hours before arrival, with a second rapid analysis in Tunisia.

With this, Tunisia ended measures that have been in place since last October to limit the rapid spread of the virus in the second wave of the epidemic, before the number of deaths and injuries slowed since mid-February.

A member of the Corona Control Committee, Al-Hashemi, said that the vaccination operations against the virus begin later this month.

The Director-General of the World Health Organization, Tedros Adhanom Ghebreyesus, announced that the team of experts that was sent to Wuhan, China in January, to investigate the origin of the "Covid-19" epidemic, will issue its report in the week that begins on March 15th.

"The team is working on the final report and a summary ... that will be issued simultaneously during the week of March 15," Tedros Ghebreyesus said, in his statements the day before yesterday, to representatives of member states.

He added, "I know that many member states are very much looking forward to seeing the report," and "of course me too."

He promised that member states would be the first to see what he had "before publishing it", and that he would review the results before them.

The Health Organization had announced, at the outset, that the expert team would quickly issue a preliminary report, before its final report.

But the initial report was abandoned in February, without providing a convincing explanation.

The experts reviewed, during a press conference at the conclusion of their mission in Wuhan, their various hypotheses about the transmission of the virus that causes "Covid-19" from animals to humans.

And it seemed that they had ruled out the hypothesis that the virus had leaked from the Wuhan Institute of Virology, as the administration of former US President Donald Trump had suggested.

However, the Director-General of the Health Organization confirmed after a while that "all the assumptions are still on the table."