Italy-France, the 'Libya dossier' at the center of the Di Maio-Le Drian meeting

Elections, ceasefire, migrations, support for Libya among the topics covered. Le Drian: soon the validation of the Quirinale Treaty&nbsp; 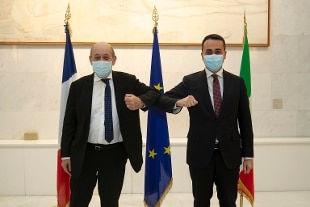 has entered a crucial phase of its path towards stability through an important institutional transition, a result for which the international community has made great efforts with the decisive and essential mediation of the United Nations. With the colleague we have shared the objectives of our support for Libya. A central element was the

on which we not only discussed as ministries, but we promoted a fruitful confrontation between our intelligence and the directors of our intelligence ", said the foreign minister. , Luigi Di Maio, during the press point with the Minister of Europe and Foreign Affairs of the French Republic, Jean-Yves Le Drian.

It is "very important that the House of Representatives meets as scheduled on March 8 to vote confidence in the Libyan government of national unity," said the head

of the foreign ministry.

Di Maio insisted on the "holding of the

on the date decided by the Libyans themselves", on 24 December, on the "full implementation" of the ceasefire agreement of 23 October, "including the complete withdrawal of foreign fighters and mercenaries. "and on the" start of the national reconciliation process ", as well as on the need to mitigate the" serious socio-economic crisis affecting the country ".

"The migration dossier remains a priority for Italy. We count on a strengthened collaboration with the Libyan authorities to ensure an effective control of the maritime borders to combat human traffickers", added Di Maio

The French Foreign Minister, about the tensions in the eastern Mediterranean, he said that "from

we want concrete gestures that indicate a willingness to resume dialogue".

And on Italy-France relations, "we discussed bilateral cooperation, because after the Naples summit in 2020, we have the project to strengthen the relationship in various areas. A new summit is planned, this time in France, which will take place not as soon as possible, taking into account the health situation. And this new summit will allow, I hope, to validate the Treaty of the Quirinale which we have already spoken about on several occasions and which should be ready on this occasion. This will certainly strengthen the future relationship between our countries "added Le Drian.

for the assassination of Ambassador Attanasio and the Carabiniere who accompanied him. We are totally in solidarity in the work against terrorism", also said the French Foreign Minister Jean-Yves Le Drian during the press conference.