Iivo Niskanen did a great job for Norway! The Finnish star was praised in Vuonimaa

In Norway, after the opening part of the message, there were fears that gold would escape, but then the Iivo locomotive hit the track. 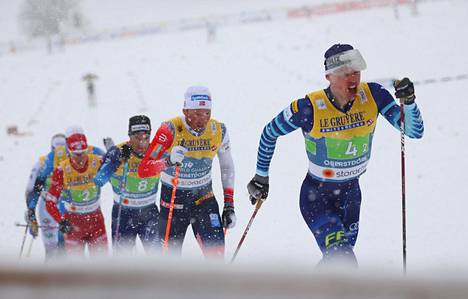 Finland was sixth in the men's 4 x 10 kilometer message.

Norway and Russia decided the fate of the gold medal, and the forces of Finnish anchor Joni Mäki were not enough for the bronze battle.

One of the locations of the message was already seen in the second leg of the race.

In the opening leg, Alexei Tshervotki of Russia drew a difference of as much as 44.7 seconds to Suomen Ristomatti Hakola and almost a minute to Norway's Pål Golberg.

Many feared that the message would be immediately resolved to the victory of a rock-hard Russian group.

In the second leg, however, Iivo Niskanen started working as a worker.

By the middle of the leg, Russia had been caught.

He was followed by Emisk Iversen of Norway, Oskar Svensson of Sweden, Dario Cologna of Switzerland and Maurice Manificat of France.

Already at that point, there was joy in the live monitoring of the Norwegian NRK.

- An incredible bet from Niskanen and Iversen.

This promises a gold medal for Norway, NRK's ​​follow-up was heckled when Niskanen started his last squeeze with his own share.

Although the men's message medal remained a dream, according to Yle's expert Kalle Lassila, Niskanen's excellent skiing was a shotgun display in view of Sunday's 50-kilometer race.

Niskanen commented in Yle's interview that he had agreed with Iversen on a shift.

- Yes, I caught it practically alone in Russia.

After the race, he admitted that there was no desire to pull, when of course he had to open strong himself, Niskanen repeated.

Niskanen would also walk on the tails of the crew for a while before taking back the role of traction leader.

- I thought I was going to see a little bit about how Sweden and France are doing.

Yes, the ventilation was high there, Niskanen said and made Yle's narrator Jussi Eskola burst out laughing.