Washington, tension returns to the Capitol

There would be a 'plot' by a group of militiamen to violate the Capitol again. For the conspiracy theorists, March 4 will be the day of Trump's return to the White House. The Chamber interrupts the work 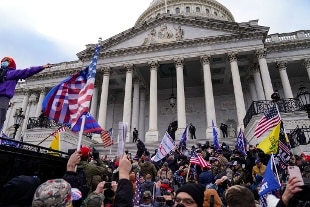 March 04, 2021 In Washington DC the alarm level has returned to its maximum, because today is the day that the conspiracy theorists of the far-right group QAnon consider the "inauguration" of the second term in the White House of Donald Trump, which has remained "secretly" the true president of the United States.

The date was not chosen at random.

Until 1933, March 4 was the inauguration day of the new president.

With the ratification of the Twentieth Amendment, the date was moved to January 20, to reduce the transition period between one administration and the next.

Capitol police said they discovered information about a "possible plot" by a group of militants against the United States Capitol.

The news comes nearly two months after a mob of supporters of then President Donald Trump raided the iconic building to try to prevent Congress from certifying current President Joe Biden's election victory.

The entire congressional area will be manned, and the capital's three airports, Thurgood Marshall, Dulles and Reagan National, will be controlled, as many MPs may be traveling.

According to sources in the Congress, cited by Forbes, there is no fear of violence, but the precedent of January 6, the day of the assault on Capito Hill, calls for caution.

The alarm comes at a time when, for security reasons, a date has not yet been set for the State of the Union address, one of the most important acts of the President of the United States, in which Joe Biden is expected to speak to the nation .

The House of Representatives terminated the weekly work early after the news of possible threats from a group of militiamen who are trying to assault the building, as happened last January 6, when a crowd of Trump supporters raided the building. building to try to prevent Congress from certifying Joe Biden's election victory.

The House has brought forward the examination of the police reform, the so-called George Floyd Justice in Police Act, from tomorrow to this evening.