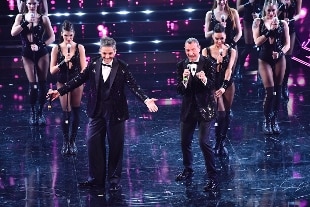 The second evening of the Sanremo Festival yesterday obtained on Rai1 10 million 113 thousand viewers equal to 41.2% of share, the second 3 million 966 thousand with 45.7%.

Chronicle of an evening of many emotions

Costume made of black feathers, Fiore starts from the outside of the Ariston.

A year ago there was the red carpet crowded with fans and onlookers, this time there is the covid desert.

It is the turn of the other four New proposals and the other 13 big names in the race.

Irama is missing, he participates "remotely" with a video shot during the dress rehearsal, because he is in quarantine following the positivity of two of his collaborators.

Alongside Amadeus, as co-host, is Elodie, super guest is Laura Pausini, a veteran of the Golden Globe victory.

Fiorello guides the camera to the Festival stage.

"I don't know what happens to me, as soon as I see the feathers ... I'm wearing Achille Lauro's backpack when he went to kindergarten" he tells Amadeus.

"This is the audience that I like" he comments, "this is the party of the Unity of the armchairs. Now I recognize the festival".

"I Amadeus call him the swiffer of controversies and in fact only he could create controversy by making the sign of the cross- continues Fiorello-. Instead, the Democratic Party was angry with me because I talked about Zingaretti and D'urso. But why are they together? I don't understand. Anyway everyone can talk about the Festival ", he underlines.

And he mentions Draghi again.

"Draghi thanks us because yesterday we lowered the spread .." says Fiorello, "he wrote the message while he wrote the financial statement with his left hand ... and sent it with a carrier pigeon because he doesn't use social media".

Finally, speaking of the boys who will return to Dad: "The time they are taking away from you will be returned to you - says Fiore -. But I want to appeal to the grown-ups: organize a vaccination campaign of the powerful ones so we can return to normal as soon as possible".

The second evening of the 71st edition of the Italian Song Festival begins.

Four of them perform.

who sings "Lessons in flight", then it's up to

with the song "Everything knows about you", then it's the turn of

(winner of the Lunezia Prize yesterday) competing with the song "Regina".

The fourth and last New proposal is the

with the song "Io sono Luca".

Davide Shorty and Wrongonyou in the final

Davide Shorty and Wrongonyou go directly to the final evening on Friday.

It is the veteran

who opens the Big race.

Sing "When You Fell in Love".

She makes her debut as co-host Elodie.

She slowly goes down the stairs: "The dress is very heavy," he says, the statuesque body wrapped in a long red rhinestone dress with a very deep slit, his hair tied up.

"I am very happy, very proud to be here".

Presents the second big in the race:

sings the song "And instead yes".

There is no talk of making peace.

And so, a year after the Ariston crime, while his former friend enters the stage to sing his song, Morgan publishes on social networks 'The bad intentions', the song revised and corrected by Morgan himself, who last year cost the couple disqualification from the festival.

welcomes Laura Pausini on stage to the notes of Queen's Bohemian Rhapsody, rearranged on the lyrics of "La solitudine", a song that gave Laura Pausini her initial success.

"Strange that a song sung by an Italian is nominated for an award in America ... I didn't expect to win," says Laura, speaking of the award she won for 'Io si' (Seen) 'as best original song, a song composed in collaboration with Diane Warren and Niccolò Agliardi.

It is the main piece of 'Life in front of itself', the film by Eduardo Ponti shot with his mother Sofia Loren.

Pausini and Fiorello set up a curtain that revives the evening.

The showman plays the beatbox with the interpreter singing Corona's 'This is the rythm of the night' to perfection, asking the orchestra to keep the beat.

Finally, still emotion: "Thank you Sophia (Loren, ed) for choosing me. This film carries a message of integration and equality, it was the key that gave a different beat to my heart".

And then a message: "When you travel a lot you can't feel alone, otherwise you don't have the courage. And I have it for you".

"And nothing .. even this time I got it under .. Thanks Sanremo, thanks @rosario_fiorello and @giovanna_e_amadeus for inviting me .. and Thanks #edoardoponti and #sophialoren I really owe you so much for choosing me. # Lavitadavantiasé".

with the song "Combat pop".

The tribute to Ennio Morricone

Tribute to Ennio Morricone on the stage of the Ariston by first the trumpeter Nello Salza with the theme of 'The good, the bad and the ugly, then by his son Andrea Morricone who conducts the orchestra on the notes of' Put an evening at dinner 'and finally Il Volo singing' Your Love '.

Emotion not only for the memory, but also for Ignazio Boschetto, one of the members of the vocal group, on stage despite losing his father on Sunday.

"I am happy that you are here even in a very difficult moment, in the evening dedicated to Italian music in the world", says Amadeus.

"I like to look at construction sites with my hands behind my back ... Because even to dig excavations you need to use the right system, you are not always born good, not always those who dig have a taste for it ... You know life, life at twenty is a carousel of lights on, but then you see surprises even after sixty ".

Fiorello parodies Vasco Rossi, giving himself an 'unpublished' written by the rocker for him, which ends with the images of a truck mixer at work on a construction site.

We return to the competition with

and the song "Amare".

"Who will give me back the life I lost in these years? Nobody, there is no going back, but it can be remedied, you cannot lose other races without blame. My little girl will see me in the race to qualify, and then at the Olympics because I have so much determination to close this circle: I won in court, but I am a sportsman and I win on the competition field ": on the stage of the Ariston Alex Schwazer

talks about his determination

to" be judged again by sports justice at light of the new facts ", after the investigating judge of Bolzano, a few months from the Tokyo Games, dismissed the criminal charges against him for doping, claiming that the 2016 charges were based on manipulated test tubes.

A rehabilitation that does not cancel the disqualification, however, until 2024. "After four and a half years I found a courageous judge I know he wanted to go all the way, he wanted to see clearly and this, unfortunately, was my luck", explains the South Tyrolean walker , still guilty for international sports justice.

To support him, in these years of battle, was the family: "I have a 4-year-old girl, a child who is about to turn five months. The family has helped me to give the right weight to things, in the midst of so much bitterness" .

Show by Elodie, who dances and sings on the Ariston stage between old and new hits, her own and those of other artists.

Again a tribute to Italian music that has become famous throughout the world with 'Non ho anni', 'Dio come I love you', 'I love you', 'I miss you', 'Senza a shred of head' and 'Green mountains'.

The competition resumes with

singing "A million things to tell you" and

It is then the turn of Gigi D'Alessio.

An applause from the Italians to remember Davide Astori, the Fiorentina defender who died on March 4 three years ago in a hotel room in Udine a few hours before the match against Udinese.

Zlatan Ibrahimovic asks for it in connection with Amadeus from Milan.

Tonight the AC Milan striker is not at Ariston because he is at San Siro to follow the team playing against Udinese.

But from today he returns as a guest at the Festival until Saturday evening.

Achille Lauro 'rock and roll' with Santamaria and Barra

Second 'painting' for Achille Lauro at the Sanremo Festival.

This time the theme is' rock and roll 'and Lauro wears a red wig with a long braid, a tribute to Mina who on Instagram Lauro defines "woman with a true Rock' N Roll soul".

On stage with him Amadeus, who introduces Claudio Santamaria and Francesca Barra, sitting on the stage.

Achille Lauro starts singing 'Bam Bam Twist' and the two dance together, just like in the video of the song.

The race resumes with

and the song "Santa Marinella" and

Is the Ariston without an audience?

It does not matter, Fiorello does his gag by involving the others anyway and therefore orchestral good-naturedly targeted.

Choosing in particular the area in the stalls where the strings are placed, he takes the phone of an orchestral musician, Silvia, and invites them to call her so that he can answer.

Duet Fiorello-Elodie on the notes of 'Vattene Amore', the song with which Amedeo Minghi and Mietta ranked third at the 1990 festival. For the occasion Elodie wears an all red dress.

Shortly before, Fiorello had heard a voice message from Elodie's boyfriend, rapper Marracash, who was complimenting the festival, said he was excited, and on the song of the 'Trottolino amoroso' he concluded: "dedicate it to me".

So at the end of the song Fiorello improvises rapper, congratulate Elodie and say hello to Marracash.

Cristiana Girelli arrives, striker of Juventus and of the Italian women's football team.

"The follow-up is important, we are pleased. Something has changed since the World Championship. We are such a united group that we have overcome many obstacles", he says.

And she adds: "I am happy that the girls can dream of being footballers, from next year we will be professionals".

The race resumes with

Then it's up to

The song is "The genesis of your color".

Elodie's monologue: the strength of the dream

"I come from a suburb of Rome, a suburb, a difficult neighborhood. We didn't have hot water, no money for bills. I didn't get my driver's license, I didn't study singing. At 20 I had decided that music was over for me. I had decided not to do anything. Then I met a person, Mauro Tre, who made me believe in myself ".

Elodie gets naked on the stage of the Ariston and tells about her difficult life until she met the jazz pianist who gave her a chance and above all taught her that "we all deserve an important moment in our life".

"I've learned to have the courage to do things. I'm probably not up to this stage, but being up to it is no longer my problem", concludes Elodie, visibly moved.