The car inspection in Sweden lets far more cars with high levels of particles and toxins into the exhaust gases. The reason is that Sweden in 2018 lowered limit values ​​for exhaust gases, at the same time as other countries have chosen to tighten the requirements. The inspection industry that produced the figures is critical of the rules. 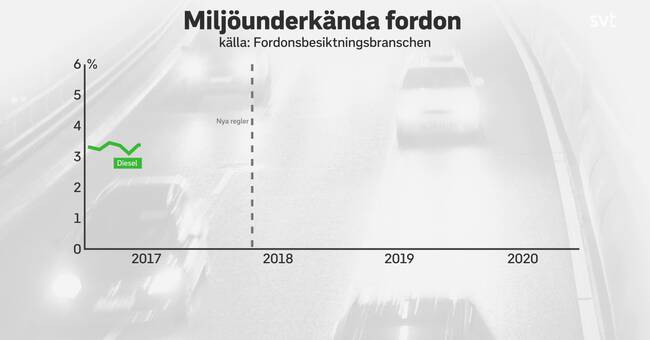 Within the EU, most countries have tightened environmental requirements for a car to pass the inspection.

But Sweden distinguishes itself by allowing higher levels of particles.

A rule change that, according to the industry, risks costing many lives.

Environmental requirements are part of the car inspection that has become increasingly important.

A car must meet requirements for, among other things, carbon dioxide emissions, nitrogen emissions and particles.

When the EU made a change, Sweden chose to lower the limit values ​​for several different emissions, including particulate matter, while other countries instead tightened the requirements.

Before the rule change in 2018, approximately 5 percent of all petrol cars were rejected for the environmental requirements, but last year the figure was only 2.5 percent.

For diesel cars, the proportion of failures has fallen from 3 percent to 1 percent.

Two thirds of the cars that were previously rejected were now given the green light to continue driving without action.

- Sweden lowered limit values ​​for almost all emissions and that means that we let more dirty cars through today.

It feels extremely strange considering the environmental goals we have in Sweden, says Tord Fornander, chairman of the Vehicle Inspection industry.

The statistics show that it was precisely with the rule change that more and more "dirty" cars began to be approved.

Often it is cars with poorly functioning catalysts, or a lambda probe (oxygen sensors, reds note) or air filters that need to be replaced.

Changed limit values ​​mean that in the past year, 80,000–90,000 cars have been let through that did not pass the inspection in previous years, and where many had been stopped in other EU countries.

Particulate emissions are today a serious environmental and health problem.

According to the research institute IVL, traffic emissions into the air cause about 3,000 deaths each year.

This can be compared with just over 100 murders or around 200 deaths in traffic accidents.

The inspection industry believes that the government and the Riksdag could do much more.

- We think Sweden should be at the top rather than the bottom among EU countries when it comes to setting environmental requirements.

It's about the cars that emit the most, says Tord Fornander.