"Positional struggle": what are the prospects for judicial reform in Ukraine

The Ukrainian parliament supported the draft law on the procedure for the formation and activities of the High Qualification Commission of Judges. The IMF demands the reform of the judicial system from Kiev. According to RT sources in Ukrainian political circles, Petro Poroshenko was unable to rebuild the judicial branch of power, now Volodymyr Zelensky is trying to solve this problem. Earlier, the president tried to disperse the country's Constitutional Court, but then the head of state had to abandon this idea. The course of judicial reform is influenced by many political and financial forces both inside Ukraine and abroad, experts emphasize. In their opinion, the transformations are unlikely to lead to a real renewal of Ukrainian justice. 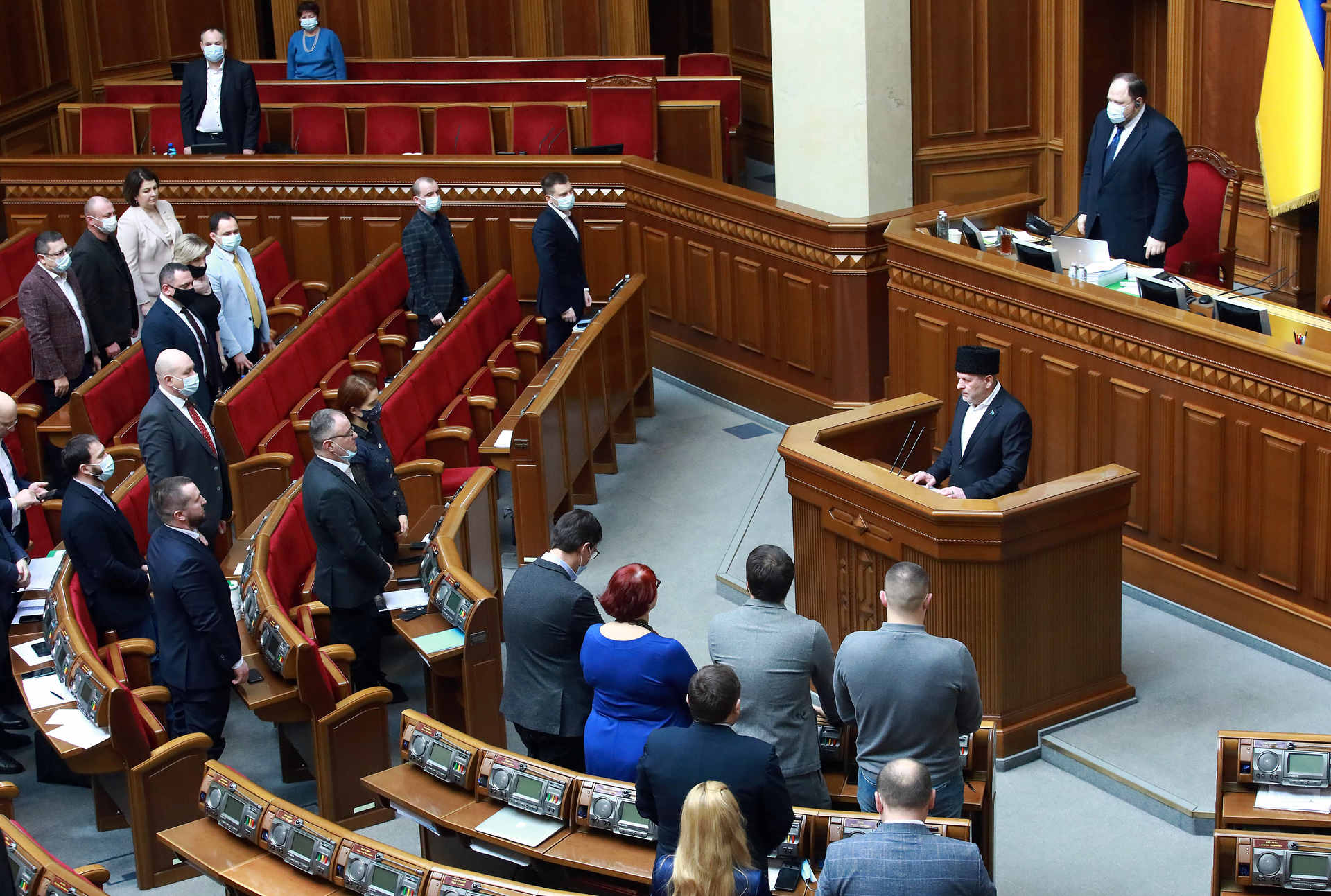 The Verkhovna Rada approved in the first reading one of the main bills for the implementation of judicial reform in Ukraine.

We are talking about the draft law No. 3711-d, the document was published on the website of the Ukrainian parliament.

The bill, supported by 227 out of 450 deputies, refers to the procedure for the formation and operation of the High Qualification Commission of Judges (VKKS).

The draft law “On Amendments to the Law“ On the Judicial System and the Status of Judges ”and some laws of Ukraine on the resumption of the work of the High Qualification Commission of Judges” stipulates that the HQCU should consist of 16 members, eight of whom should be appointed from among judges or retired judges.

The Commission is formed by the High Council of Justice for a four-year term based on the results of a competition.

The competition, in turn, will be conducted by the Virtue Commission.

The commission will be formed of three judges or retired judges, as well as three candidates from among international experts proposed by international structures helping Ukraine to fight corruption.

In addition, the bill is supposed to establish the maximum number of judges of the Supreme Court at no more than 200.

On the eve of the commitments of Kiev to combat corruption and carry out a comprehensive judicial reform, President of the European Council Charles Michel recalled.

The official noted that Ukrainian citizens deserve a responsible and independent judiciary.

According to the President of the European Council, judicial reform is necessary for Ukraine in order to restart the main judicial authorities and establish a new transparent procedure for the election of judges to the High Council of Justice.

Recall that the High Council of Justice was launched in 2017.

The collegial body of judicial self-government was called upon to ensure the independence of the judiciary.

It was created on the basis of the High Council of Justice that operated in Ukraine earlier.

On March 1, the chairman of the Verkhovna Rada, Dmitry Razumkov, also spoke about the importance of judicial reform.

Speaking at the briefing, he stressed that the reform is necessary to increase the investment attractiveness of Ukraine.

Razumkov explained that now foreign and Ukrainian businesses are afraid to invest in the Ukrainian economy, because any business wants to be sure of its security.

Speaking about bill No. 3711-d, the chairman of the Ukrainian parliament noted that the document would not be able to resolve all issues related to the reform.

“However, we have to start somewhere,” he added.

At the end of February, Ukrainian President Volodymyr Zelenskyy made a call to reform the judicial branch of government.

“The judicial system in the format in which it exists today has already proven its inadequacy.

Ukrainians do not trust the courts, this institution is too corrupt and too shaky, ”the head of state said.

Earlier, in December 2020, the politician announced the start of judicial reform in 2021.

“Now we are at war with some judges of the Constitutional Court who want to destroy the anti-corruption structure in Ukraine.

We will reformat all of this.

And the next big step is the global judicial reform in Ukraine, which we will begin to implement next year, ”he told The New York Times.

Earlier, the European Commission for Democracy through Law of the Council of Europe (Venice Commission) called on the Verkhovna Rada to cancel some decisions of the Constitutional Court of Ukraine concerning anti-corruption norms.

“The Venice Commission confirms that the decision of the Constitutional Court of Ukraine No. 13-r / 2020 lacks clearly defined arguments, that it does not have a solid international legal basis, and that it was probably accompanied by a serious procedural flaw - the unresolved issue of the conflict of interests of some judges ”, - said in the conclusion of the European structure.

Recall that in September 2020, the Constitutional Court of Ukraine recognized as unconstitutional a number of powers of the National Agency for the Prevention of Corruption (NAPK), as well as an article on criminal liability for inaccurate declaration of income of officials.

The President submitted to the Rada a bill on the termination of the powers of the current composition of the Constitutional Court.

At the same time, according to Ukrainian laws, the Constitutional Court can dissolve itself by a decision of two-thirds of its composition.

In response to the actions of the head of state, the judge of the Constitutional Court Igor Slidenko announced attempts to usurp power by the president and warned of the tragic consequences of such a scenario.

In January 2021, Zelensky withdrew from the Rada the bill on the dissolution of the Constitutional Court.

As noted by an RT source in the Golos party, the president was forced to abandon his idea when he realized that his demand to dissolve the Constitutional Court would not be fulfilled.

“In fact, the dissolution would create a new problem, as the process of selecting new judges could drag on for years.

And it is unprofitable for Zelensky to create a new crisis in Ukraine, given the growing discontent of the population and loud criticism of opponents.

Every step of Zelensky is examined literally under a microscope, not only by the Ukrainians themselves, but also by the Europeans, ”added the interlocutor of RT.

In his opinion, if Zelensky makes major mistakes now, he will lose his chances of being re-elected for a second term.

In turn, Deputy Director of the Institute of CIS Countries Vladimir Zharikhin believes that Zelensky's concession is connected with the pressure on him by the oligarchs.

“We can say that in this case the oligarchs managed to defend their interests,” the expert noted in a commentary on RT.

According to political scientist and economist Alexander Dudchak, the conflict around the Constitutional Court has not ended.

"Now a positional struggle continues between political forces, which practically do not differ ideologically and care about personal enrichment," the expert emphasized in an interview with RT.

Attempts to reform the judicial branch of Ukraine were made by the administration of Petro Poroshenko.

However, these efforts were unsuccessful.

During the election campaign, Zelensky's supporters actively criticized the measures that were taken under Poroshenko and promised drastic changes if their candidate wins.

Since coming to power, Volodymyr Zelenskiy has taken a number of drastic steps to change the judicial system.

In November 2019, the politician signed a bill to cut the number of judges of the Supreme Court by half - from 200 to 100 people.

The document also provided for the dissolution of the High Qualification Commission of Judges and a reduction in the number of its members from 16 to 12.

These steps by the head of state were met with criticism.

The head of the political council of the Ukrainian party Opposition Platform - For Life, Viktor Medvedchuk, warned then that Zelensky's reform was aimed at eliminating the country's Supreme Court.

Experts note that the draft law, which is now being considered by the Rada, enshrines another reform option - the Supreme Court will have 200 judges, and the VKKS - 16 people.

“Probably, this law was the result of some kind of bargaining, which did not end quite the way Zelensky wanted.

Many influential forces in Ukraine want to have their own shadow “quota” in court in order to influence decision-making, ”Oleksandr Dudchak believes.

Vladimir Zharikhin adheres to a similar point of view.

According to him, the Ukrainian leader is forced to balance in order to comply with the interests of his party, the oligarchs and Washington.

“In this triangle, every time he painfully tries to find the resultant force, although in most cases he has to take into account the interests of the American embassy.

However, judicial reform is not a very important issue for the United States.

Therefore, in this situation, Ukrainian oligarchs are most active.

And they want to have their people in the Supreme Court, ”the expert added.

As recalled by a RT source in the office of the Ukrainian president, judicial reform is one of the main requirements of the IMF and Ukraine's western partners.

“They are interested in the courts in Ukraine to work honestly and to protect European business from bribes, claims of officials, raider attacks that are widespread in the country.

The previous president, Petro Poroshenko, promised to make the court independent, but it was not profitable for him to implement the reform.

Otherwise, he would have lost the lever of pressure on opponents, who, if necessary, could be brought to justice.

Volodymyr Zelenskyy is already in a position where it is impossible to refuse Western partners, ”the source explained.

At the same time, the Ukrainian authorities do not yet have an exact idea of ​​what exactly the updated judicial system should be, Oleksandr Dudchak believes.

“But we can already say that the political and financial elites of the country will try to influence the reform and will try to put the changes at their service.

Yes, Kiev can reform the judicial system, but the reform is unlikely to be effective, ”the expert summed up.